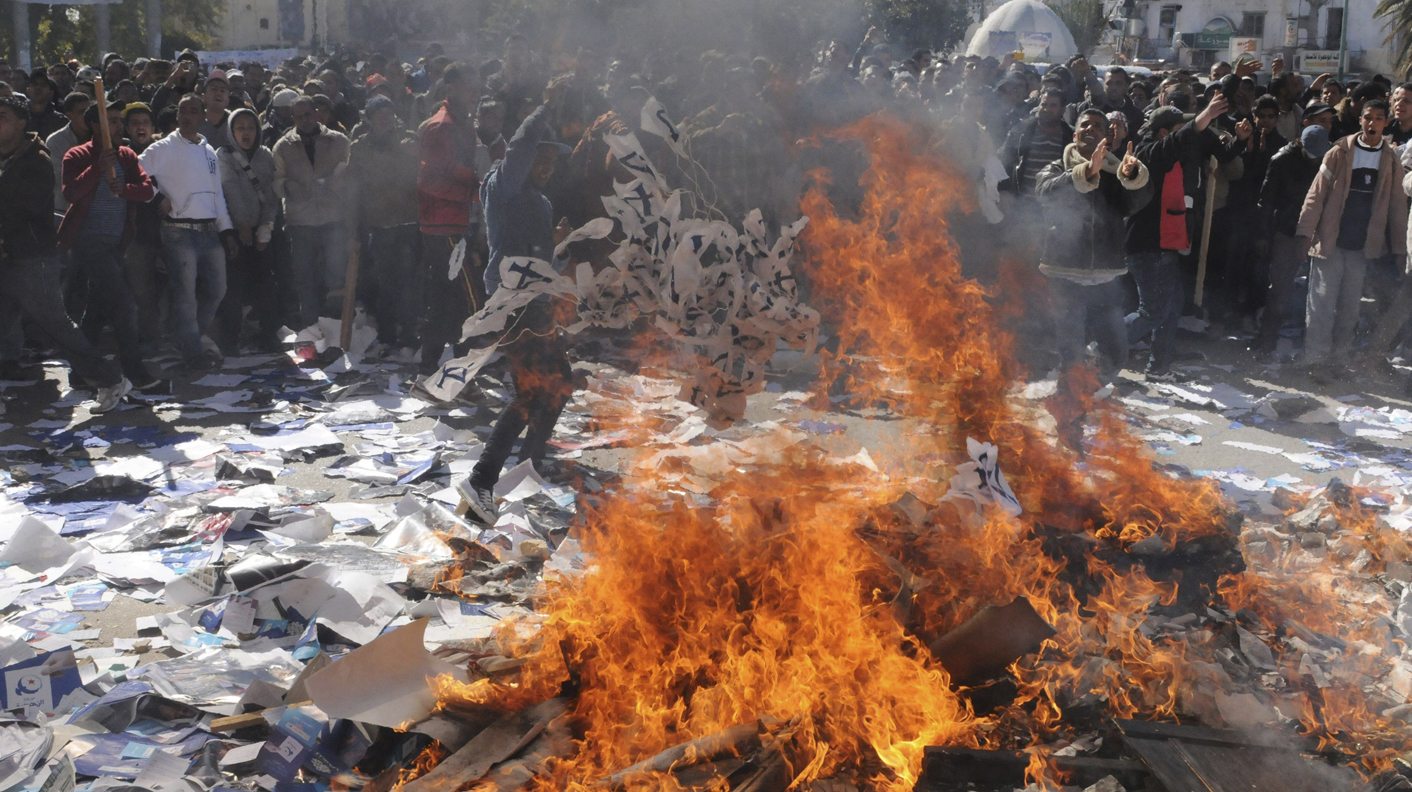 Tunisia's ruling Islamists dissolved the government on Wednesday and promised rapid elections in a bid to calm the biggest street protests since the revolution two years ago, sparked by the killing of an opposition leader. By Tarek Amara.

The prime minister’s announcement that an interim cabinet of technocrats would replace his Islamist-led coalition came at the end of a day which had begun with the gunning down of Chokri Belaid, a left-wing lawyer with a modest political following but who spoke for many who fear religious radicals are stifling freedoms won in the first of the Arab Spring uprisings.

During the day, protesters battled police in the streets of the capital and other cities, including Sidi Bouzid, the birthplace of the Jasmine Revolution that toppled Zine al-Abidine Ben Ali in January 2011.

In Tunis, the crowd set fire to the headquarters of Ennahda, the moderate Islamist party which won the most seats in an legislative election 16 months ago.

Prime Minister Hamdi Jebali of Ennahda spoke on television in the evening to declare that weeks of talks among the various political parties on reshaping the government had failed and that he would replace his entire cabinet with non-partisan technocrats until elections could be held as soon as possible.

It followed weeks of deadlock in the three-party coalition. The small, secular Congress for the Republic, whose leader Moncef Marzouki has served as Tunisia’s president, threatened to withdraw unless Ennahda replaced some of its ministers.

Wednesday’s events, in which the Interior Ministry said one police officer was killed, appeared to have moved Jebali, who will stay on as premier, to take action.

“After the failure of negotiations between parties on a cabinet reshuffle, I have decided to form a small technocrat government,” he said.

It was not clear whom he might appoint but the move seemed to be widely welcomed and streets were mostly calm after dark.

A leader in the secular Republican Party gave Jebali’s move a cautious welcome.

“The prime minister’s decision is a response to the opposition’s aspirations,” Mouldi Fahem told Reuters. “We welcome it principle. We are waiting for details.”

Beji Caid Essebsi, leader of the secular party Nida Touns, who was premier after the uprising, told Reuters: “The decision to form a small cabinet is a belated move but an important one.”

The widespread protests following Belaid’s assassination showed the depth of division between Islamists and secular movements fearful that freedoms of expression, cultural liberty and women’s rights were under threat just two years after the popular uprising ended decades of Western-backed dictatorship.

“This is a black day in the history of modern Tunisia. Today we say to the Islamists, ‘get out’, enough is enough,” said Souad, a 40-year-old schoolteacher outside the ministry.

“Tunisia will sink in the blood if you stay in power.”

Calls for a general strike on Thursday could bring more trouble though Belaid’s family said his funeral, another possible flashpoint, might not be held until Friday.

Ennahda, like its fellow Islamists in Egypt’s Muslim Brotherhood, benefited from a solid organisation that survived repression by the old regime, to win 42 of seats in the assembly elected in October 2011 to draft a new constitution.

And as in Egypt, the Islamists have faced criticism from secular leaders that they are trying to entrench religious ideas in the new state. A constitution is still due to be agreed before a parliamentary election which had been expected by June.

Belaid, 48, was shot at close range as he left for work by a gunmen who fled on the back of a motorcycle. Within hours, crowds were battling police, hurling rocks amid volleys of teargas in scenes reminiscent of clashes in Egypt last month.

World powers, increasingly alarmed at the extent of radical Islamist influence and the bitterness of the political stalemate, urged Tunisians to reject violence and see through the move to democracy they began two years ago, when their revolution ended decades of dictatorship and inspired fellow Arabs in Egypt and across North Africa and the Middle East.

As in Egypt, the rise to power of political Islam through the ballot box has prompted a backlash among less organised, more secular political movements in Tunisia. Belaid, who made a name for himself by criticising Ben Ali, led a party with little electoral support but his vocal opinions had a wide audience.

The day before his death he was publicly lambasting a “climate of systematic violence”. He had blamed tolerance shown by Ennahda and its two, smaller secularist allies in the coalition government toward hardline Salafists for allowing the spread of groups hostile to modern culture and liberal ideas.

On Wednesday, thousands demonstrated in cities including Mahdia, Sousse, Monastir and Sidi Bouzid, the cradle of the revolution, where police fired teargas and warning shots at protesters who set cars and a police station on fire.

While Belaid’s nine-party Popular Front bloc has only three seats in the constituent assembly, the opposition jointly agreed to pull its 90 or so members out of the body, which is acting as parliament and writing the new post-revolution charter. Ennahda and its fellow ruling parties have some 120 seats.

Since the uprising, Tunisia’s new leaders have faced many protests over economic hardship and political ideas; many have complained that hardline Salafists may hijack the revolution.

The embassy issued a statement condemning Belaid’s killing and urging justice for his killers: “There is no justification for this heinous and cowardly act,” it said. “Political violence has no place in the democratic transition in Tunisia.”

Declining trade with the crisis-hit euro zone has left the 11 million Tunisians struggling to achieve the better living standards many had hoped for following Ben Ali’s departure.

Its compact size, relatively skilled workforce and close ties with former colonial power France and other European neighbours across the Mediterranean has raised hopes that Tunisia can set an example of economic progress for the region.

Lacking the huge oil and gas resources of North African neighbours Libya and Algeria, Tunisia counts tourism as a major currency earner and further unrest could scare off visitors vital to an industry only just recovering from the revolution.

Jobless graduate Mohamed Bouazizi set himself on fire in December 2010 in the city, 300 km (180 miles) southwest of Tunis, after police confiscated his unlicensed fruit cart, triggering the uprising that forced Ben Ali to flee to Saudi Arabia less than a month later, on Jan. 14, 2011.

President Moncef Marzouki, who last month warned the tension between secularists and Islamists might lead to “civil war”, cancelled a visit to Egypt scheduled for Thursday and cut short a trip to France, where he addressed the European Parliament.

“There are political forces inside Tunisia that don’t want this transition to succeed,” Marzouki said in Strasbourg. “When one has a revolution, the counter revolution immediately sets in because those who lose power – it’s not only Ben Ali and his family – are the hundreds of thousands of people with many interests who see themselves threatened by this revolution.”

Belaid, who died in hospital, said this week dozens of people close to the government had attacked a Popular Front group meeting in Kef, northern Tunisia, on Sunday. He had been a constant critic of the government, accusing it of being a puppet of the rulers of wealthy Gulf emirate Qatar.

Human Rights Watch called his murder “the gravest incident yet in a climate of mounting violence”.

Ennahda leader Rached Ghannouchi denied any involvement by his party in the killing.

“Is it possible that the ruling party could carry out this assassination when it would disrupt investment and tourism?” Ghannouchi told Reuters.

He blamed those seeking to derail Tunisia’s democratic transition: “Tunisia today is in the biggest political stalemate since the revolution. We should be quiet and not fall into a spiral of violence. We need unity more than ever,” he said.

He accused opponents of stirring up sentiment against his party following Belaid’s death. “The result is burning and attacking the headquarters of our party in many areas,” he said.

French President Francois Hollande said he was concerned by the rise of violence in Paris’s former dominion, where the government says al Qaeda-linked militants linked to those in neighbouring countries have been accumulating weapons with the aim of creating an Islamic state across North Africa.

“This murder deprives Tunisia of one of its most courageous and free voices,” Hollande’s office said in a statement. DM

Photo: Demonstrators burn documents of the Ennahda party, outside the party’s headquarters, during a demonstration in Gafsa February 6, 2013. Thousands of Tunisians demonstrated outside the Interior Ministry headquarters following the slaying of secular opposition leader Chokri Belaid. REUTERS/Stringer