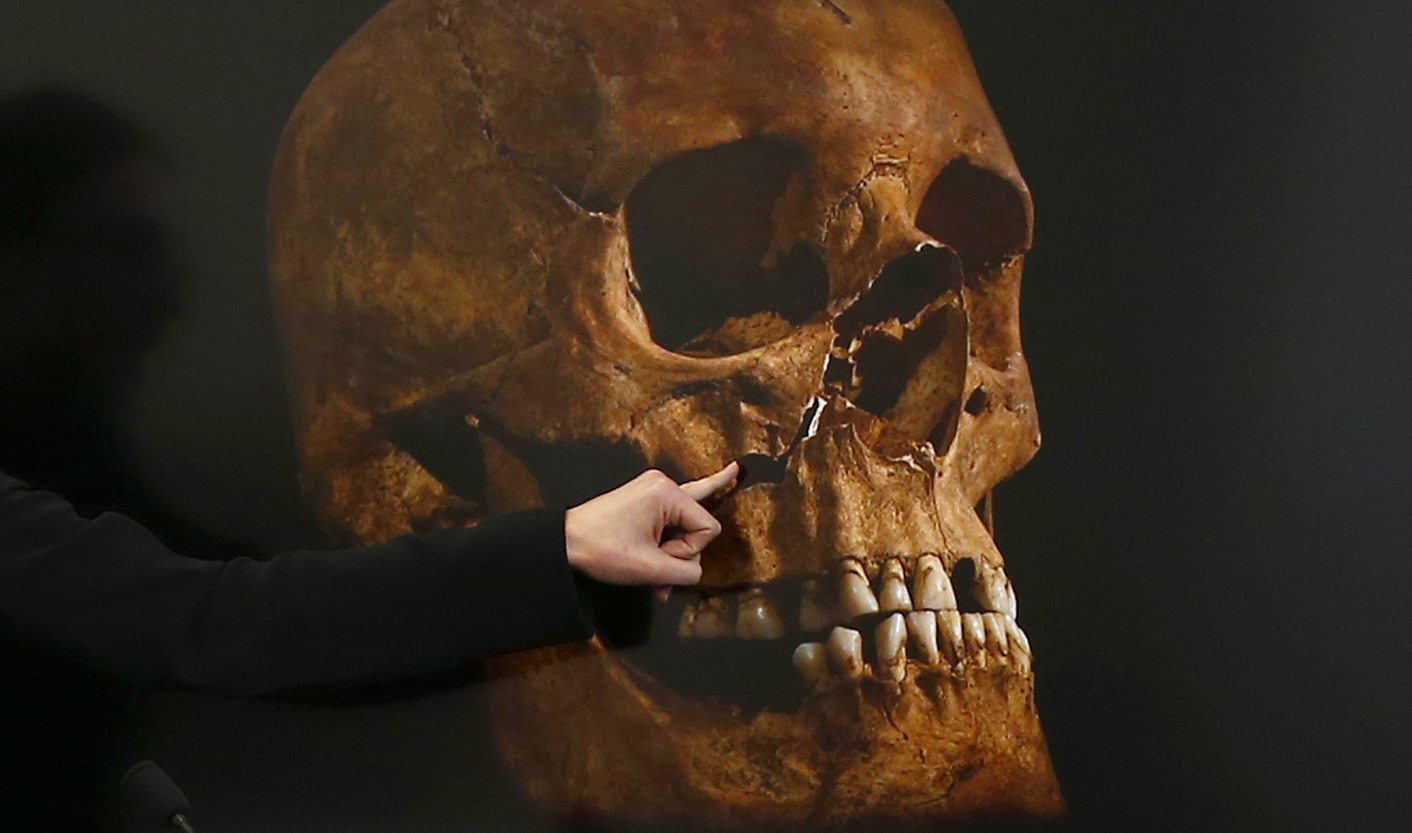 A skeleton with a cleaved skull and a curved spine dug up from under a car park is that of Richard III, archaeologists said on Monday, solving a 500-year-old mystery about the final resting place of the last English king to die in battle. By Michael Holden.

Cast by Shakespeare as a deformed tyrant who murdered two princes in the Tower of London, Richard was slain as he fought to keep his crown at the Battle of Bosworth Field in 1485, crying out: “A horse! A horse! My kingdom for a horse!”

In one of the most significant archaeological finds of recent English history, a team from the University of Leicester said evidence showed a skeleton found last year in excavations of a mediaeval friary under a city car park was that of Richard.

The skeleton had 10 wounds, eight of them to the head, clearly inflicted in battle and suggesting the king had lost his helmet. The skull showed a blade had hacked away part of the rear of the skull. A metal fragment was found in the vertebrae.

The victor, the future King Henry VII, had Richard’s naked body exposed to the people of Leicester to show the battle was won, ending the bloody 30-year civil conflict known as The Wars of the Roses between the houses of York and Lancaster.

Other wounds were consistent with being caused after death when his body was taken from the battlefield to nearby Leicester on the back of a horse. All of the “humiliation” wounds in his final hours were from swords, daggers or halberds and it appeared his hands had been bound. The feet were missing.

Confirmation the bones were Richard’s hinged on DNA taken from the skeleton matching that of Michael Ibsen, a Canadian-born furniture maker in London who genealogists said was the direct descendant of Richard’s sister, Anne of York.

Admirers of Richard hope that the discovery will help to dispel the image of Shakespeare’s physically impaired protagonist who said: “And therefore, since I cannot prove a lover … I am determined to prove a villain.

The curvature of the spine, so ruthlessly mocked by Shakespeare as “deformed, unfinished” and famously depicted by Laurence Olivier, was striking. The skeleton showed a high-protein diet of meat and fish that would reflect life at court.

After a detailed presentation focusing on the life, wounds and physique of Richard, Buckley, announced his conclusion to world media amidst cheers and applause. The project almost ended prematurely, but funds from countries including the United States kept it afloat.

Richard, who died aged 32 after two years on the throne, will be interred at Leicester Cathedral, which traces its history to a Saxon bishop in AD 680, in line with guidelines about burying bodies close to where they are exhumed.

“These are the mortal remains of a person, an anointed Christian king who shared the faith proclaimed by the cathedral, a faith which promises redemption and hope … to bring victory out of defeat,” said David Monteith, Canon Chancellor at the Cathedral. Asked if the ceremony would be a royal affair, he said: “I’m sure those in London are watching carefully today.”

The grey, concrete car park with its red-brick walls and a payment hut, under which the bones were found, contrasts sharply with the grandeur of traditional sepulchres for English kings and queens at Windsor Castle and Westminster Abbey.

Asked if the prime minister agreed with some Conservative MPs who want a state burial for the late, a spokesman for David Cameron said: “The decision on burial is a matter for Leicester University who hold the licence to exhume the remains.”

The team used radar and radiocarbon dating as part of the project that located the body in front of the choir stalls of the friary. No clothes or personal objects were found and there were no traces of a coffin.

The evidence ends the centuries-old mystery which has fascinated historians in Britain and around the world and which has provided material for a welter of legends, one of which maintained the body was dug up in the reign of Henry VIII, thrown in a river and the stone coffin used as a horse trough.

Richard’s grave, lost after Henry VIII ordered the monasteries dissolved, had been as elusive as his reputation. Richard was cast by Shakespeare as a monster but supporters say he was enlightened and unfairly maligned by a victorious House of Tudor.

There was also a DNA match with another unidentified descendant of Anne of York who wished to remain anonymous. The genetic match was especially significant as it was a rare type of DNA found in only a few percent of the population, said Turi King, a geneticist at the university.

“It’s really difficult to come to grips with the fact that there is some part of you that is part of somebody as famous or infamous as Richard III,” Ibsen said in an interview.

Unlike his mediaeval ancestor, Ibsen said he did not plan to put forward his family’s claim to the throne: “I think our chances are long gone.” Buckingham Palace declined comment on the importance of the discovery, which is expected to increase interest in Richard and bring more visitors to Leicester.

The remains of the king were put on display on a black velvet cloth encased in a glass box for the media and other guests in a small room with a worn red carpet that is part of the University of Leicester’s library.

There was reverential silence as two security guards manned the door and a chaplain looked on. No photography was allowed as a mark of respect to the remains of the man who once ruled England.

Richard’s skeleton, found just 68 cm (2 feet) below the present ground level, indicates he was slight with a small rib cage. Radiocarbon dating from rib bones indicated they were from a man who died between 1455 and 1540.

While the findings may solve the mystery about the whereabouts of the grave of Richard, the last Plantagenet king of England remains a complex figure whose life, made famous by Shakespeare’s history play, deeply divides opinion.

In a sign of the widespread public interest in Richard, photographs of his skull were published on the front pages of national newspapers in Britain on Monday and the academic briefing on the find was shown live on television news channels.

A tough soldier and popular in northern England, Richard was crowned at Westminster Abbey in July 1483 after replacing his 12-year-old nephew Edward V on the throne after claims that the young prince and his brother, the sons of Richard’s elder brother Edward IV, were illegitimate.

The two boys later disappeared from the Tower of London, and their fate is one of the greatest unanswered historical questions. However, Richard has long been blamed for ordering, or even carrying out, the murder of the “Princes in the Tower”.

Much of that is thanks to Shakespeare’s “The Tragedy of King Richard the Third”, which portrays him as a power-crazed, evil hunchback who killed off his rivals to get to the throne.

Richard has been played by a multitude of actors including Olivier, David Garrick and Kenneth Branagh. Lines from the play include “Now is the Winter of our discontent”, “Off with his head!” as well as “Where Eagles Dare” which became a film title.

His supporters say Shakespeare’s play is misleading Tudor propaganda, written over a century later when Queen Elizabeth I, the granddaughter of Henry Tudor, who became Henry VII after his victory over Richard at Bosworth, was on the throne.

“People can see he’s been done a massive injustice and I think it gets them angry and I think they want people to look at the facts about this man and change everything that we’ve … been told about him,” said Philippa Langley, a member of the Richard III Society who launched the four-year search.

The level of international interest in the project was shown when the money nearly ran out and supporters from the United States, Canada, Australia, New Zealand, Brazil, Belgium, Germany, Austria, the Netherlands and Britain helped out.

“No disrespect to Olivier because he was a brilliant actor, but that portrayal of Richard III is going to be consigned to the dustbin of history. (He) was a mediaeval man and mediaeval king,” said Langley, adding:

“He just wasn’t the monster of Tudor legend.”

And the answer to the burning question of whether Richard killed the princes in the Tower?

Langley, a pro-Richard devotee, was adamant. “The evidence that we have says he did not”. DM

Photo: Project Osteologist Jo Appleby points out damage to a skull, believed to be that of Richard III, during a news conference in Leicester, central England February 4, 2013. British researchers said on Monday that a skeleton with a cleaved skull and a curved spine entombed under a car park was that of Richard III, solving a 500-year-old mystery about the final resting place of the last English king to die in battle. REUTERS/Darren Staples