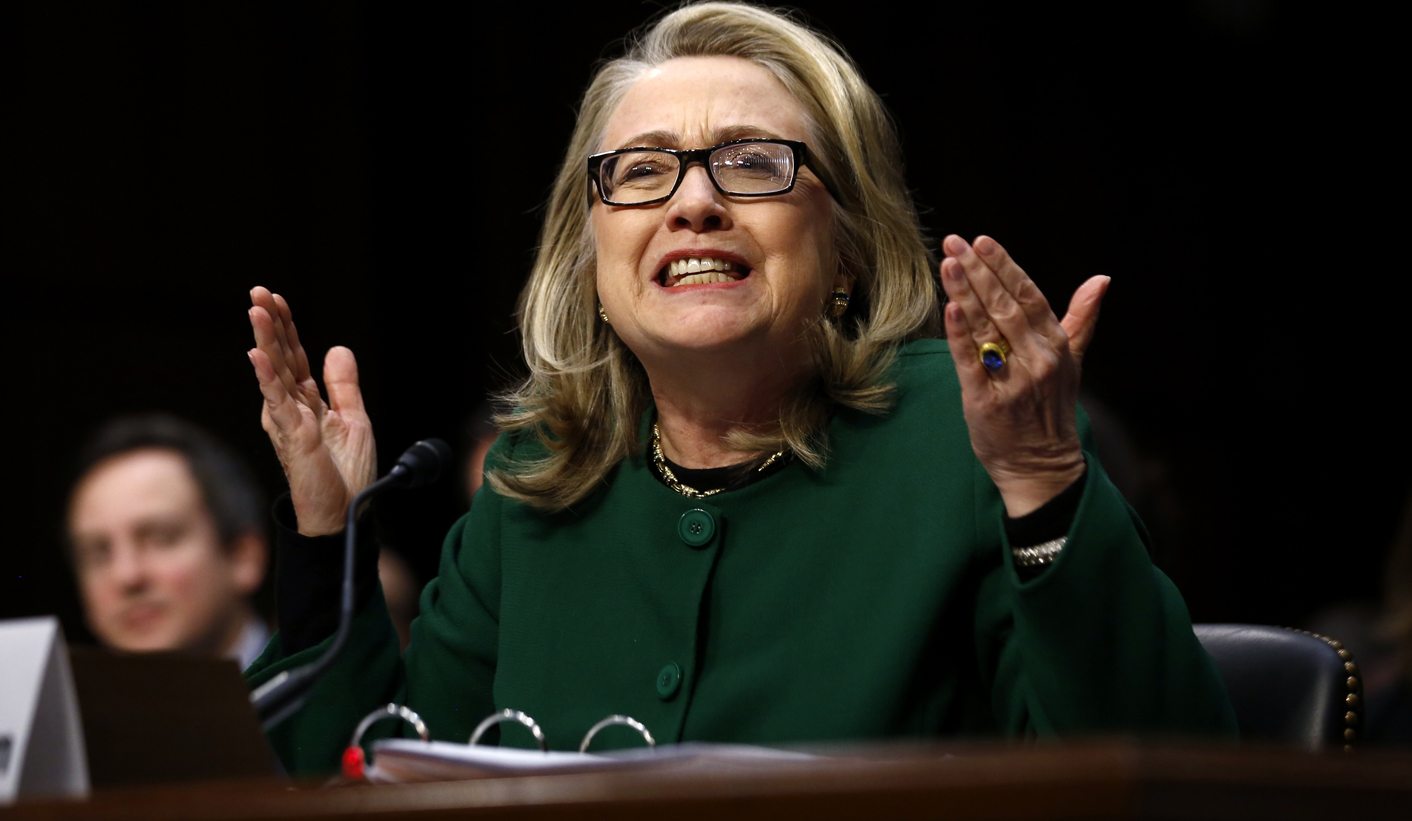 Secretary of State Hillary Clinton on Wednesday forcefully defended her handling of the Sept. 11 attack on the U.S. mission in the Libyan city of Benghazi and denied any effort to mislead the American people. By Arshad Mohammed and Tabassum Zakaria.

The attack by armed militants that killed U.S. Ambassador Christopher Stevens and three other Americans threatens to stain Clinton’s legacy as secretary of state and could cast a longer shadow should she decide to make a White House run in 2016.

By turns emotional and fierce, Clinton choked up at one point in six hours of congressional testimony as she spoke of comforting the Benghazi victims’ families and grew angry when a Republican accused the Obama administration of misleading the country over whether the attack stemmed from a protest.

“With all due respect, the fact is that we had four dead Americans,” Clinton said angrily as she testified before the Senate Foreign Relations Committee, an appearance delayed more than a month because of her ill health.

“Was it because of a protest, or was it because of guys out for a walk one night who decided they’d go kill some Americans? What difference, at this point, does it make?” she said, making chopping motions with her hands for emphasis.

“It is our job to figure out what happened and do everything we can to prevent it from ever happening again.”

During the morning Senate hearing and a later session in the U.S. House of Representatives, Republicans and Democrats pointed fingers at each other, with Republicans accusing Clinton’s State Department of mismanagement and Democrats defending her.

But little new information about the Benghazi incident and the administration’s response to it emerged from the lengthy hearings. Clinton did say that there were at least 20 other U.S. diplomatic posts under serious security threat, but declined to name them at the public session.

Clinton cast the Benghazi incident as part of a long history of such violence as well as the result of instability since the Arab Spring of popular revolutions began in 2011, toppling authoritarian rulers in Tunisia, Egypt, Libya and Yemen.

“Benghazi did not happen in a vacuum,” Clinton said. “The Arab revolutions have scrambled power dynamics and shattered security forces across the region.”

On the same day as the Benghazi assault, a mob angered by a U.S.-made video depicting the Prophet Mohammed as a fool and philanderer attacked the U.S. embassy in Cairo. There were later attacks on U.S. embassies in Tunisia, Yemen and Sudan.

Clinton, echoing comments she first made on Oct. 15, said: “I take responsibility.” She stressed that she had accepted all the recommendations of an independent panel that investigated the incident and that held lower-level officials responsible.

“Nobody is more committed to getting this right. I am determined to leave the State Department and our country safer, stronger and more secure,” Clinton said.

Militants attacked and overwhelmed the U.S. diplomatic facility in Benghazi, Libya, on Sept. 11 in a sustained assault.

The official U.S. inquiry released on Dec. 18 concluded that “leadership and management failures” in two State Department bureaus led to a security posture “inadequate for Benghazi and grossly inadequate to deal with the attack that took place.”

The unclassified version of the “Accountability Review Board” report also faulted poor coordination and unclear lines of authority in Washington. Four lower-level officials were placed on administrative leave following the release of the inquiry, which did not find Clinton personally at fault.

Clinton is expected to step down in the coming days once her designated successor, Senator John Kerry, is confirmed by the U.S. Senate.

Originally due to testify on Dec. 20, Clinton had to postpone after she suffered a concussion when she fainted due to dehydration. Doctors later found she had a blood clot in her head and hospitalized her for several days.

Several senators, noting the vehemence of Clinton’s defense, said she appeared to have fully recovered.

While many senators warmly praised her four-year tenure as secretary of state, and several hinted at the possibility of her running for president in 2016, some Republicans were scathing.

They pressed Clinton about what they described as an Aug. 16, 2012 cable from Stevens saying that the Benghazi mission could not withstand a coordinated attack.

“That cable did not come to my attention,” Clinton replied, saying that the State Department receives 1.43 million cables a year.

“Had I been president at the time and I found that you did not read the cables … from Ambassador Stevens, I would have relieved you of your post. I think it’s inexcusable,” Paul, a Kentucky Republican, told Clinton.

‘AS COMBATIVE AS EVER’

Senator John McCain, an Arizona Republican, told Clinton it was “wonderful to see you in good health and as combative as ever,” before going on to say that he categorically rejected one of her answers and found others unsatisfactory.

While clouding Clinton’s tenure at the State Department, the controversy over the Benghazi attack also cost Susan Rice, the U.S. ambassador to the United Nations, her chance to succeed Clinton as secretary of state.

Republicans in Congress blasted Rice for her comments five days after the attack in which she said it appeared to be the result of a spontaneous protest rather than a planned assault.

Rice, who has said her comments were based on talking points from the U.S. intelligence community, eventually withdrew her name from consideration for the top U.S. diplomatic job.

“We were misled that there were supposedly protests and then something sprang out of that, an assault sprang out of that,” Senator Ron Johnson, a Wisconsin Republican, told Clinton, referring to Rice’s appearance on Sunday television talk shows.

“People have accused Ambassador Rice and the administration of, you know, misleading Americans,” she said. “Nothing could be further from the truth.”

Earlier in her testimony, Clinton appeared to try subtly to distance herself from Rice’s comments.

“The very next morning, I told the American people that heavily armed militants assaulted our compound, and I vowed to bring them to justice. And I stood with President Obama in the (White House) Rose Garden as he spoke of an act of terror,” she said.

Clinton’s voice cracked as she spoke of comforting families who lost relatives in the incident, the first since 1988 in which a U.S. ambassador was killed.

“For me, this is not just a matter of policy – it’s personal,” Clinton told the Senate panel.

“I stood next to President Obama as the Marines carried those flag-draped caskets off the plane at Andrews,” she added, her voice breaking as she described the ceremony at Andrews Air Force Base in Maryland when the men’s remains were brought home.

“I put my arms around the mothers and fathers, the sisters and brothers, the sons and daughters and the wives left alone to raise their children,” she said. DM