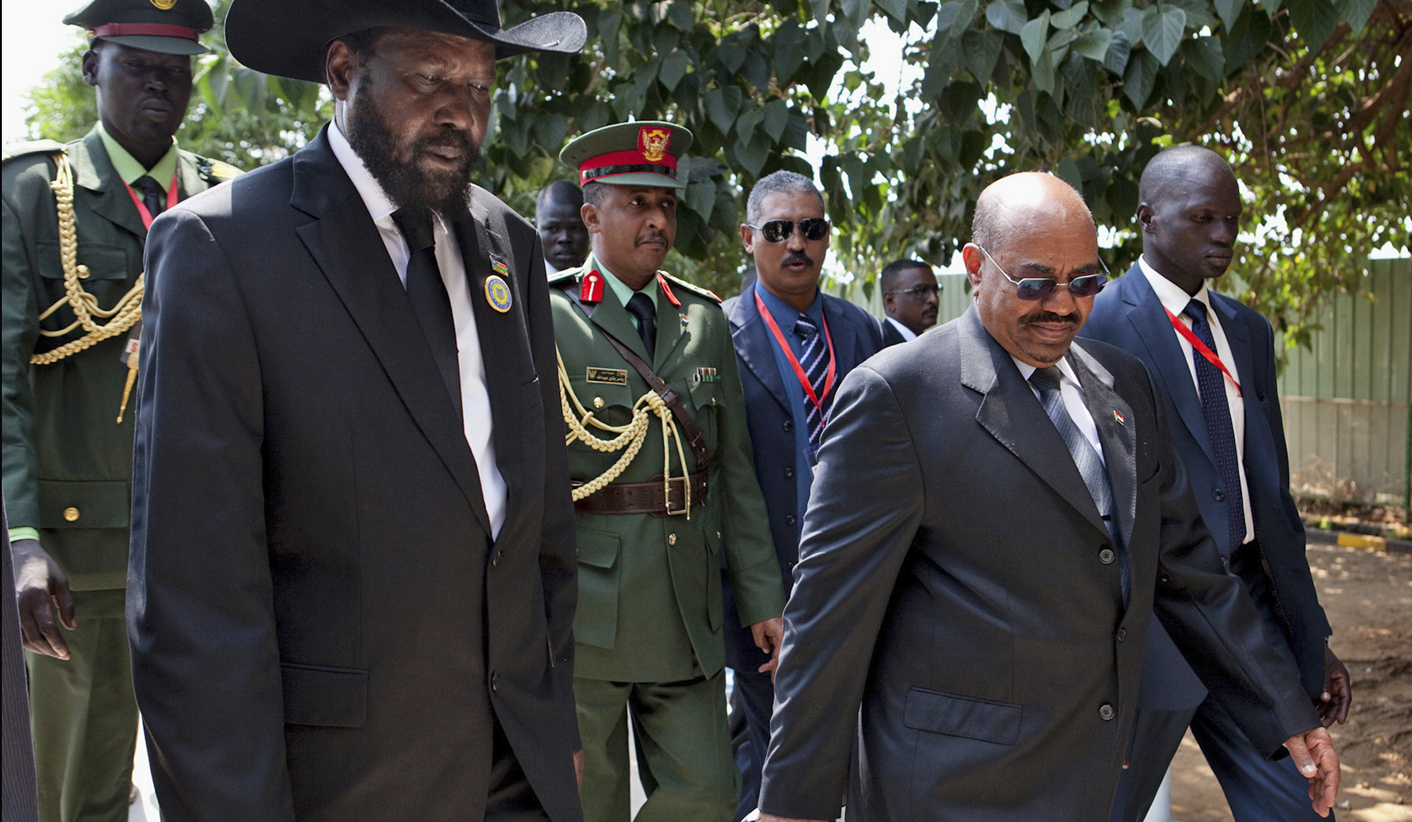 Yet more peace talks in Addis Ababa did little to solve the many and varied issues between Sudan and South Sudan. The final agreement looks suspiciously like other agreements which have come before, none of which have been properly implemented. Both presidents were present at the talks, but, for once, they’ve each got bigger problems to face than each other. By SIMON ALLISON.

In Addis Ababa this weekend, the presidents of Sudan and South Sudan – two countries which 18 months ago were just one – thrashed out yet another agreement to solve the never-ending border and security issues between them. President Omar al-Bashir, with an international arrest warrant hanging over his head, and President Salva Kiir, with a trademark black cowboy hat over his, gritted their teeth and smiled for the cameras as they shook on a deal that neither is likely to be able to enforce.

Let’s start with Bashir. The Sudanese leader, who has clung onto power through thick and thin since 1989, is desperately trying to stave off the most serious threats to his rule to date. “Facing armed resistance from restive ethnic groups in all corners of the country, as well as unrest on city streets from a population resentful of the state’s repressive tendencies, the regime has shown signs of losing its grip on power,” wrote TIME magazine in a recent article which wondered how much longer Bashir had left. “The regime’s problems are exacerbated by delays in the flow of oil from South Sudan, sinking the Sudanese pound to an all-time low. As economic woes deepen, many observers suspect that Bashir…will face an internal power struggle that he may not survive.”

Bashir’s regime is built on two overlapping and mutually supporting pillars: a heavy investment in the military and a strong appeal to conservative Islamists. Elements within both of these groups are now turning against him, upset by the loss of the south (and its lucrative oilfields), a failure to reform his ruling National Congress Party and a recent string of military setbacks, including an audacious Israeli raid on an arms factory in Khartoum and the temporary but embarrassing loss to rebels of Sudan’s largest remaining oilfield in Heglig. This is more than mere grumbling: in November, Bashir averted an attempted coup, arresting 13 people for their involvement. Amongst these 13 was former security chief Salah Gosh, once one of the most powerful men in the country. Bashir can no longer trust his friends.

Meanwhile, his enemies are plotting too. As Bashir was signing the latest agreement, he will have been painfully aware that in neighbouring Uganda, the two most powerful opposition groupings in his country were making their own deal – to work together to topple Bashir and his government. Meeting in Kampala were representatives from the Sudan Revolutionary Front (an alliance of all Sudan’s major armed opposition groups led by an offshoot of South Sudan’s ruling party) and the National Consensus Forces (a coalition of opposition political parties).

Their talks were breathtaking in their audacity, according to a report in the Sudan Tribune. For the opposition, Bashir’s fall is a matter of when, not if, and they are already planning for the post-Bashir era in some detail. There will be a four-year transition period, a strict separation between mosque and state, and a constitution that guarantees democracy. How exactly this will come about remains hazy, especially as the National Consensus Forces are avowedly against violence; but come about it will, the opposition believes, and they are more united than ever before.

Bashir’s counterpart at the negotiating table was President Salva Kiir. The two men know each other well because they’ve been at this for years, but Kiir won’t be too worried by Bashir’s troubles – he’s got enough of his own to deal with. South Sudan remains very much a work in progress, and the president is not nearly as powerful as he’d like to be. It’s very much doubtful whether Kiir has the authority to implement any of the agreements made in Addis Ababa, especially the ones which involve some kind of compromise. Not that it’s necessarily his fault.

“Even the toughest of presidents would be struggling right now in South Sudan,” wrote Harriet Martin for Al Jazeera. “It has no money to pay its civil servants, its police and most importantly – in view of where there is most discontent – its army.”

It is this army that Kiir needs onside in order to guarantee the most important provision of the new deal reached between Sudan and South Sudan this weekend: the establishment of a ‘buffer zone’ between the two countries, a demilitarised zone which should calm tensions and prevent any accidental conflict triggers (if this sounds familiar, it is: almost the exact same provision was agreed in talks last year, albeit in less detail). But not everyone in the army is keen, and Kiir will have a tough time persuading them to withdraw.

And this, let’s not forget, is a president who can’t even keep his own state media in check: bizarrely, two senior South Sudanese state broadcast journalists were arrested this week for failing to report on one of the president’s speeches (it’s hard to blame them for missing the speech: Kiir is the exact opposite of a charismatic speaker, his flamboyant cowboy hat not enough to mask his staid public persona).

So, while it’s always a good idea for Sudan and South Sudan to talk through their problems rather than fight them out, we have to wonder just how effective these current negotiations are. Currently, both leaders are dangerously close to the title of lame duck president, with limited authority to implement the terms of any deal. Both are fighting for their own political lives first and the good of their countries second. Chances are, it’s only once these internal battles are sorted out one way or the other that there will be any real progress in solving the issues between the two countries. DM