Gaza: What now for Hamas? 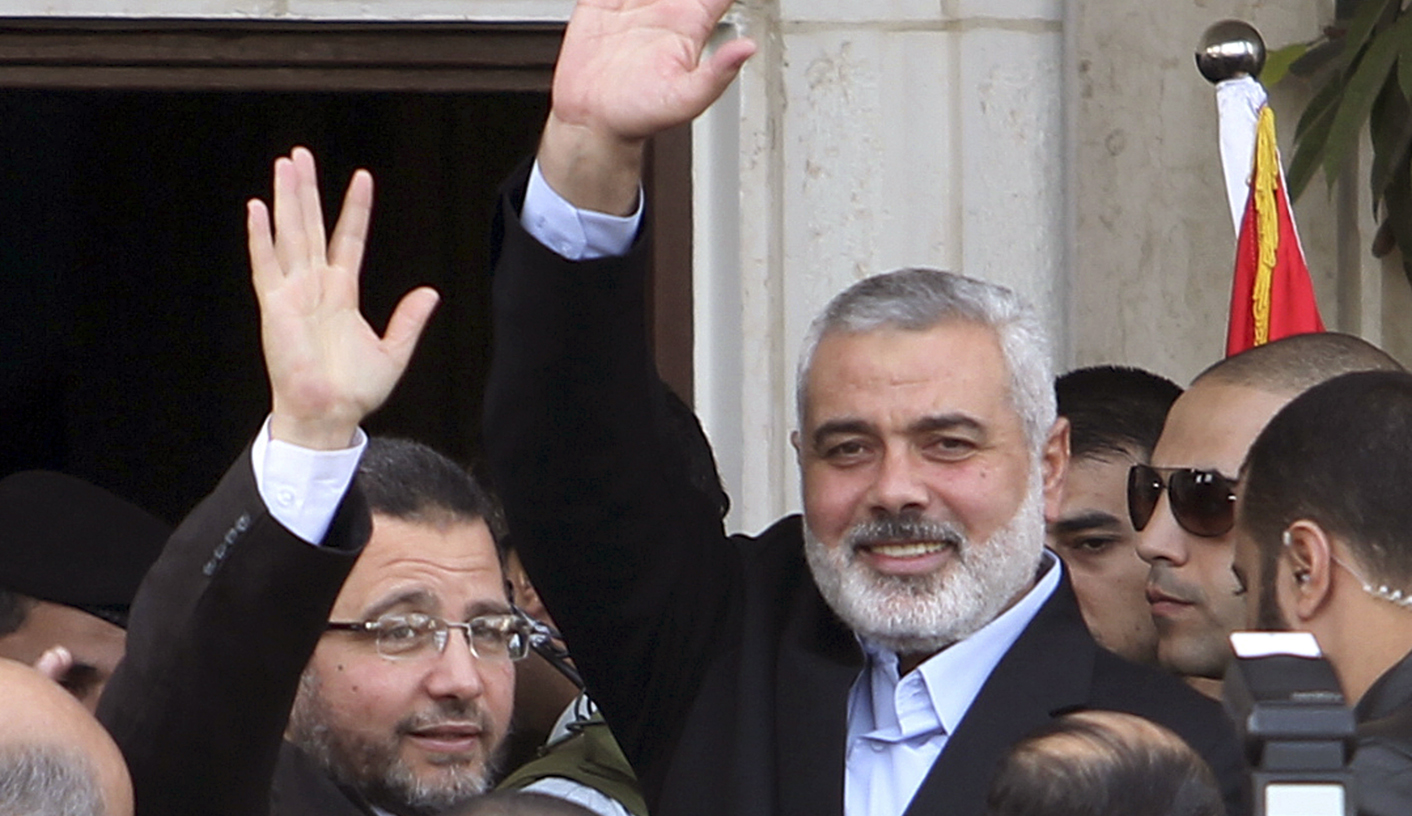 Amid the shock, awe and gory images of death and destruction, small movements are being made towards negotiating a ceasefire between Hamas and Israel. But even if a ceasefire looks tricky for now, some analysts believe the ascendant Hamas military leadership may actually not respect any decision taken by its exiled leadership. By KHADIJA PATEL.

Khaled Meshal, Hamas chief in exile, cut a stoic figure when he spoke from Khartoum after the death of Hamas military chief Ahmed Jabari. Hours later, the speech of leader of Hamas in Gaza, Ismail Haniyyeh, was a stunning contrast. Haniyyeh was more emotive and, unlike Meshal, appeared pained at the loss of Jabari. Onlookers claimed the difference in the two reactions explained why Meshal was fast losing popularity among Palestinians: as a leader in exile, Meshal is no longer able to empathise with the experience of Palestinians on the ground in Gaza.

Still, many were surprised when Hamas retaliated against Jabari’s death by firing rockets deeper into Israel than ever before.  Writing in the Abu Dhabi-based daily The National, Hugh Naylor says, “ Analysts say the Hamas retaliation may be explained in part by long-standing fissures within the Hamas leadership that have widened as a result of the Arab Spring. Squabbles within the movement, they say, have drowned out pragmatic voices.”

Jabari has been described posthumously as one such pragmatic voice.

According to Gershon Baskin, a co-chairman of the Israel Palestine Centre for Research and Information, that just hours before Jabari’s death he had seen a draft proposal for a permanent ceasefire between Hamas and Israel in Gaza. Baskin says Jabari had realised Palestinians paid far too dearly for rocket strikes into Israel.

“Jabari, understood the futility of successive rocket attacks against Israel that left no real damage on Israel and dozens of casualties in Gaza,” Baskin writes in The New York Times.

After Jabari’s death, then, hardliners in the military faction of Hamas are said to have trumped the group’s exiled leadership.

“Hamas officials in Gaza have tried to use the crisis to weaken the group’s leadership abroad,” Mahdi Abdul-Hadi, an analyst and founder of the Jerusalem-based Palestinian Academic Society for the Study of International Affairs, told The National.

Pitting Meshal, the Doha-based leader of Hamas, against the group’s Gaza-based prime minister, Ismail Haniyyeh, is a hard-line faction in Gaza that appears to be on the rise. For this faction, Meshal is said to have long lost legitimacy as a leader. Any progress he makes in negotiating a cease-fire may therefore come to naught.

Na’eem Jeenah, Director of the Afro-Middle East Centre in Johannesburg, believes such an assessment of a leadership battle within Hamas is misplaced.

“There is still a strong adherence to the collective,” he says. “The one thing about Hamas is that the military is fully under the control of the political leadership.”

Jeenah notes, however, that analyses of deepening differences between the Hamas leadership in exile and those in Gaza are still valid.

“The feeling in Gaza is that those on the outside don’t know what it’s like to live in Gaza and are unaware of the rigours of governance, while those on the outside feel that in their experience and their ability to travel and engage with more people, those in Gaza don’t see the bigger picture,” he explains.

For Jeenah, both factions’ views of the other are correct.

Khaled Hroub, author of several books on Hamas, including Hamas: A Beginner’s Guide, explained to Al Jazeera that Hamas’s leadership is decentralised between the Gaza Strip, the West Bank, the Israeli jails and the leadership outside of Palestine. According to Hroub, the leadership structure actually works in favour of Hamas.

“This kind of power of decentralisation of Hamas makes the whole movement stronger in terms of not caging the leadership in one single area, and because of this they keep producing leaders from the third and second rankings to the highest echelons of the movement,” he said.

“In Gaza, as the de facto government, Hamas has not been all that loved,” he says, adding that conditions in Gaza do not assist the facilitation of good governance. “They are better liked as a resistance movement than a government.”

Bishara notes that each time Israel invades Lebanon – or Gaza – radical elements within Hezbollah and Hamas get stronger, the groups become more radical.

“I’m pretty sure fears of radicalisation are correct,” Jeenah says.

And as the Palestinian Authority in the West Bank, under Mahmoud Abbas, prepares to apply for a watered-down recognition of statehood at the United Nations general assembly next week, it is Abbas’ Fatah movement that appears worst off after the flare-up in Gaza.