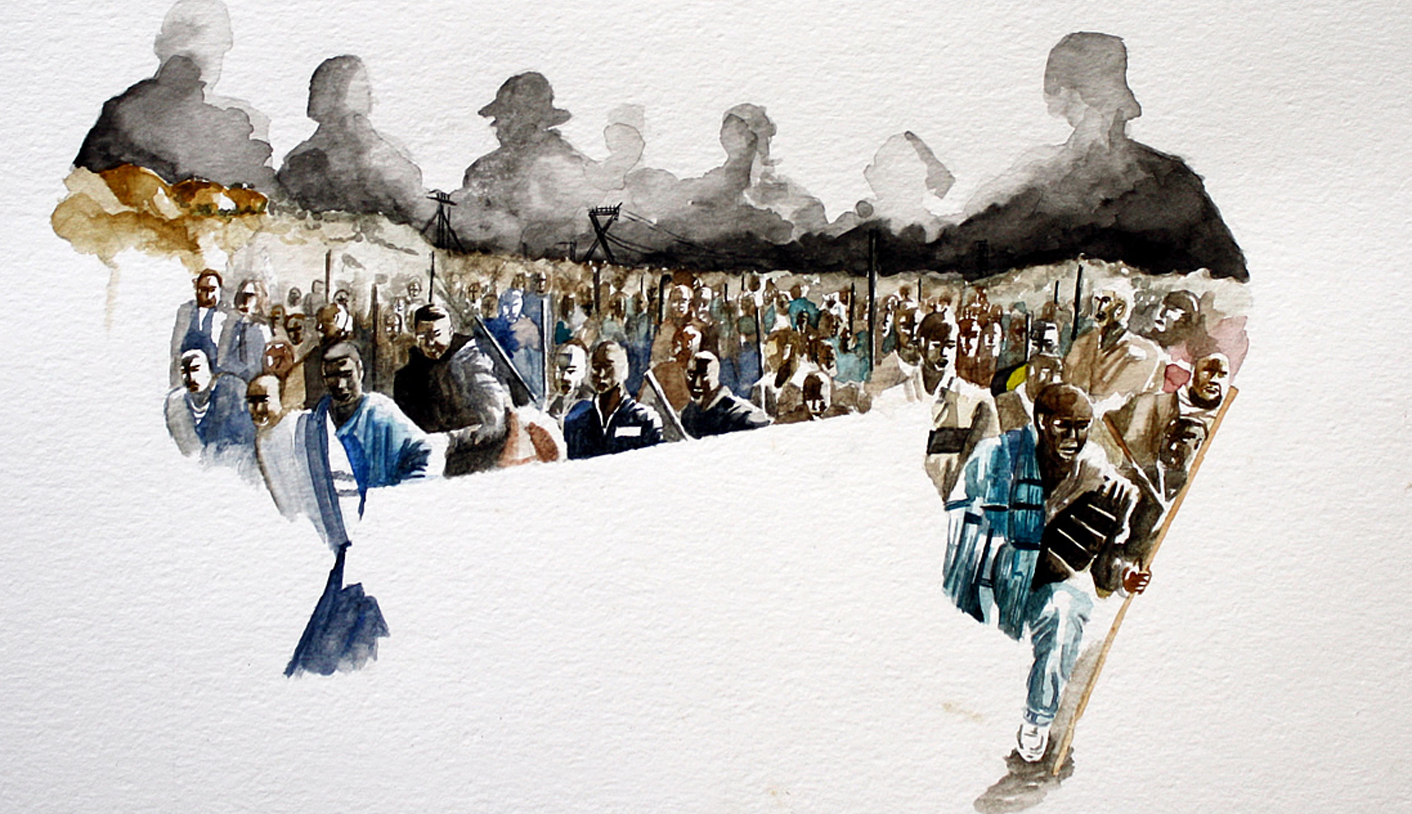 Born into an extended family where SA’s migrant labour system brought material opportunity, but wreaked havoc with familial ties, health and communities, artist Lehlohonolo Dhlamini tries to make sense of a Marikana that has wounded us all. He has done so the best way he knows – with his brushes and water colours. By MANDY DE WAAL.

Lehlohonolo Dhlamini was at Newtown’s Artist Proof Studio on Thursday 16 August 2012, when the guns roared at Marikana. When the unspeakable was over and the body count had been done, 34 lives had been lost, and the country – Dhlamini included – was reeling.

“The shooting was the first thing to come to my attention; it was a shock. During my lifetime I have not experienced something like this,” says Dhlamini, an artist who has exhibited widely in group shows at venues such as Constitution Hill, ABSA Gallery, David Brown Gallery and the Thompson Gallery.

An artist whose body of work conveys strong social commentary, Dhlamini has painted the Marikana massacre in a way that embalms the memory of life; that moment before the guns roared. The painting, entitled Unexpected is always upon us, is a visual evocation of Franco-Czech author Milan Kundera’s writing about remembrance and storytelling in The Book of Laughter and Forgetting:

The past is full of life, eager to irritate us, provoke and insult us, tempt us to destroy or repaint it. The only reason people want to be masters of the future is to change the past. They are fighting for access to the laboratories where photographs are retouched and biographies and histories rewritten… The struggle of man against power is the struggle of memory against forgetting.

Dhlamini’s artwork shows a sea of protesting miners, spears and knobkierries in hand. The workers are alive, and vital. Above the scene of life hover seven or more shadowy figures, and the darkness of SA’s mining industry.

Dhlamini has a personal connection to the local mining and migrant labour scene. Like many miners who lost their lives in Marikana, he is a “migrant” from rural South Africa. Born in Alberton and raised in a single-parent household in Qwa Qwa in the rural Eastern Free State, he came to “the place of gold” looking to create a better life.

And then there are Dhlamini’s family connections.

“I have several family members who work on mines. They have babies and they have families who depend on them, and the money they bring in. I think: ‘What if one of those people at Marikana were one of my family members?’

The pull of the mining industry also proved hard to resist for those whose circumstances were already strained. “When I was around 10 years old, the mining industry was the job that paid,” Dhlamini continues. “If you worked in the mine you had money – above teaching or any other thing. Salaries from the mines supported so many communities. But there are also so many fathers who went there and just never came back. My work has always addressed issues of ‘migrancy’ (migrant labour) which is a part of our lives.”

His particular interest as an artist – and as a person – lies with the impact of the mining industry on a micro level. Or, to put it more bluntly, the human level, including the constellations of family connections left behind by migrant workers. “For a long time I looked the domestic context of this thing. What are the emotional and practical dynamics of being a single mother raising a family?” he asks. “A similar question must be asked and answered from the perspective of grandmothers, older sisters and younger brothers.”

Dhlamini tells Daily Maverick that some migrant workers came back home with diseases. And that others never came back home at all. “There’s this chain of broken families. The Free State is like Gauteng in that it is also a place of gold. Gold builds, but it also breaks down.”

For Dhlamini, Marikana resonates on a deeply personal level and speaks to the artist or storyteller’s instinct to re-narrate that which defies understanding. “There are so many things that could have been avoided,” he says, pointing his finger at corruption and a system he says has become deeply contaminated. “Politicians have shares in the mines. And the unions – it is hard to tell who is representing whom. These things, this contamination, it has cost us. It has driven us to this point. If people (in power) were really doing their jobs we wouldn’t have reached this point.” Dhlamini finds his inspiration in the everyday narrative that is life in South Africa, and is interested in particular in the relationships that bind us to each other. “This is our history, where we come from and the role this all plays in the way we perceive the world today. In my life – in moving from place to place, from the city to the ‘rurals’ and then back again – I learned about the way people react to each other.

“I’ve been to various places which have various features. We can fall in love with the culture of an area, with these features, but then you move again and you start again – and all you have is you. So this sense of self within migration – within the reality of moving – this has been something that has influenced my art, finding that sense of self,” he says.

Dhlamini also believes that self-knowledge is important. “You can go through so much, but at the end of the day you are still just who you are. That knowledge can help you weigh yourself against situations and circumstances. You can assess how you need to be, how it would be best for you to be, regardless of the circumstances that surround you,” he says.

The first thing he did when he arrived in Johannesburg from the rural Free State in 2005, after completing his matric, was to look for an art school.  The young aspirant ended up at Artist Proof Studio, an art education centre founded by Kim Berman and the late Nhlanhla Xaba (who tragically died in a fire that destroyed the studio’s first premises in President Street in Johannesburg).

Established in response to a call by Nelson Mandela for South Africans to build a democratic society that would promote equality, reconciliation, diversity and human rights, today the Artist Proof Studio is situated in Newtown.

“The APS (Artist Proof Studio) experience was great, but like most of life, it had good and bad things – it wasn’t only about the school. At APS you have to find the way and the opportunities yourself. This has the advantage of building your own confidence. If we were spoon-fed we wouldn’t be where we are today. So at times it could be hard, but there were many benefits,” says Dhlamini, who still works at the studio as a drawing facilitator with first-year students.

“I know many people in South Africa who blame others for their failures. But it’s not like that – life. I believe instead of being a victim we should choose to be survivors and not blame other people. Reality – we need to deal with it.”

“We” in this case being, of course, South Africans. Not that there is much clarity on how this “we” can deal with the reality Dhlamini mentions. Especially, to relate it back to his painting, after the Marikana massacre.

Essentially, if one believes expert analyses, such a disaster is a societal trauma that needs to be processed by all of us individually, but also as a society, with the help of our artists and communal narrators. And it is here that the role of artists like Dhlamini becomes so important. Trauma experts posit that a well-functioning culture can create a buffer of sorts that can help some members of society mitigate against the more disruptive and devastating effects of collective traumas. Culture that creates identity and collective meaning coalesces, while trauma disrupts and tears asunder.

The bullets at Marikana not only took lives, but rent the fragile fabric that threaded itself through South African society and culture. As sociologist Kai Erickson puts it in A New Species of Trouble, collective traumas – like the massacre at Marikana – are “a blow to the basic tissues of social life that damages the bonds attaching people together and impairs the prevailing sense of community… The experience of trauma, at its worst, can mean not only a loss of confidence in the self, but a loss of confidence in the scaffolding of family and community, in the structures of human government, in the larger logics by which humankind lives.”

And it is here that the narrative function of art can prove to be so healing. “Cultural stories, myths and legends that have as themes the mastery of past events of collective trauma also may be used a resource by members of a culture who are currently experiencing collective trauma,” adds US sociology professor Mary de Young, who believes strongly in the curative cultural contribution of various art forms.

A contribution by artists like Dhlamini. A contribution that can, if we have any cohesion left, help South Africa process its current reality – Marikana, and the torn threads that remain. DM