Devastated US Northeast crawls back after monster storm

Devastated US Northeast crawls back after monster storm 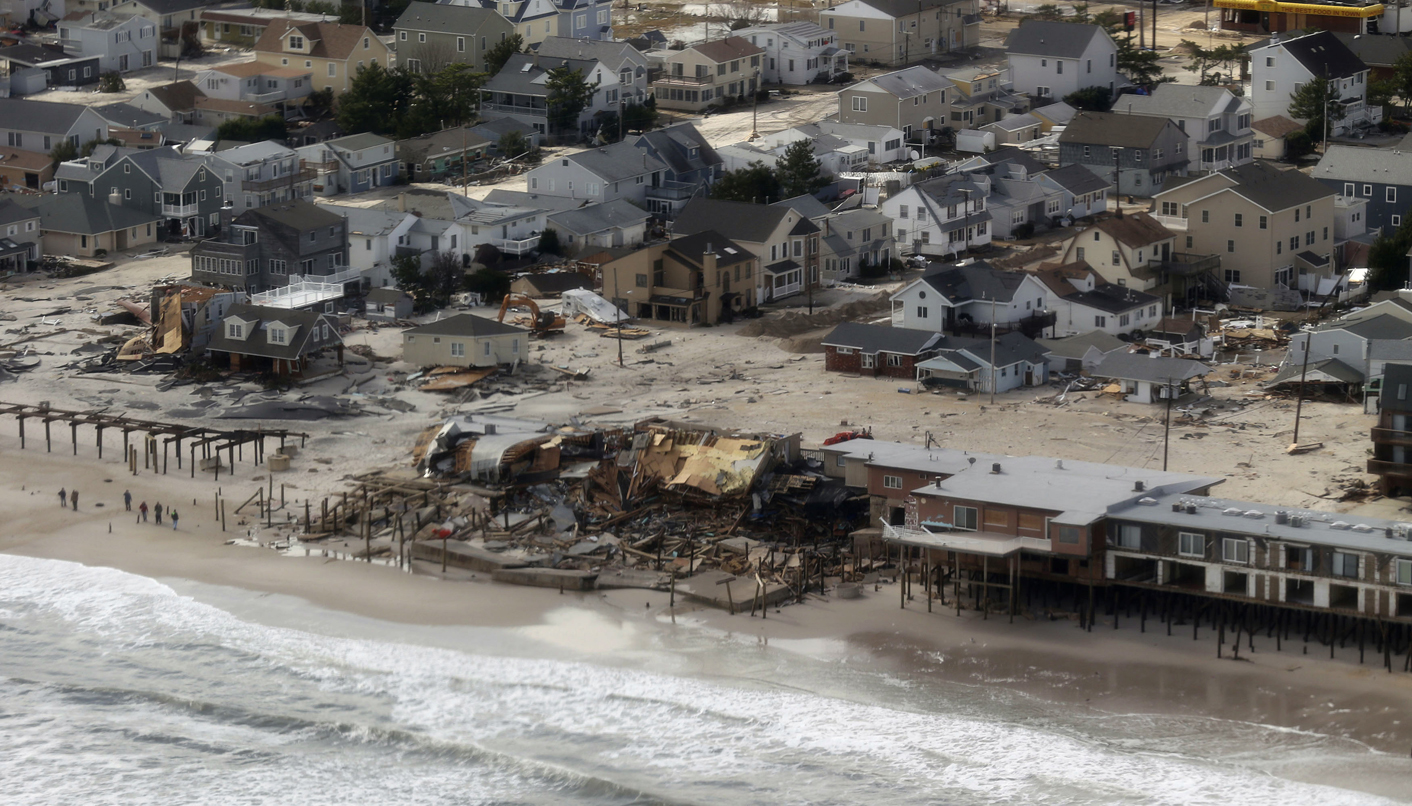 The U.S. Northeast began an arduous slog back to normal on Wednesday after historic storm Sandy crippled transportation, knocked out power for millions and killed at least 64 people with a massive storm surge that caused epic flooding. By Daniel Bases and Dena Aubin

The progress stood in contrast to images of devastation along the New Jersey Shore. The state’s governor, Chris Christie, joined President Barack Obama aboard the Marine One presidential helicopter for a tour over flooded neighborhoods and burning homes.

“If your homes aren’t too badly damaged we can hopefully get you back in,” Obama told residents at an evacuation shelter in the town of Brigantine. “The entire country’s been watching. Everyone knows how hard Jersey has been hit.”

Sandy crashed ashore on Monday as the largest storm to hit the United States in generations after killing dozens of people in the Caribbean. It was likely to rank as one of the costliest storms in the nation’s history.

One disaster-modeling company said Sandy may have caused up to $15 billion in insured losses.

While financial markets reopened and some New York residents returned to work, there were setbacks in the city. Building damages forced the evacuation on Wednesday of Bellevue Hospital, a major medical center best known for its psychiatric services and emergency care.

Medical professionals were moving 500 patients to other hospitals, Bloomberg said. Evacuations of four other hospitals and 17 chronic care facilities had already been ordered.

An evacuation order for 375,000 New Yorkers in low-lying areas remained in effect and with subways down the mayor ordered that cars must have three or more passengers to enter Manhattan.

Across the Hudson River in Hoboken, chest-high floodwaters rushed into the streets in a flash on Monday night just after the power went out, and by Wednesday morning the water was still knee high in many areas.

“I thought it was the end. I kept telling my sons to pray and that’s all we did,” said Marcelina Rosario, 47, who was trapped in the second floor of her Hoboken apartment. “Everything happened so fast. The water started coming up, the refrigerator was floating.”

Still, it will take days or weeks to recover from the massive power and mass transit outages.

“It looks like the pictures of London or even Dresden after World War Two,” New York Senator Charles Schumer said in describing Breezy Point, a New York City area where 111 homes were destroyed by fire.

“Last night I had to drive into lower Manhattan. It’s eerie to see all the lights out. No street lights, no traffic lights and no glows in any of the apartment buildings,” Schumer said, calling for national unity similar to what followed the attacks of Sept. 11, 2001.

More than half of all the gas stations in New Jersey and Long Island were shut on Wednesday due to power outages and depleted fuel supplies, frustrating attempts to restore normal life, industry officials said.

With six days to go before the Nov. 6 elections, Obama and Christie set aside political differences to tour the devastated New Jersey shore together.

Christie has been a vocal backer of Republican challenger Mitt Romney but praised Obama and the federal response to the storm. They lifted off by helicopter under cloudy skies for an hour-long aerial tour of affected areas.

“I am hesitant to make political calculations about the impact of an event that resulted in the death of 50 people and the loss of $50 billion in property,” said David Axelrod, Obama’s senior campaign adviser.

The growing U.S. death toll from the storm reached at least 64, with 30 people killed in New York state, including 22 in New York City, nine in Maryland, and six each in New Jersey and Pennsylvania. Five other states reported fatalities.

Sandy killed 69 people in the Caribbean last week as a hurricane before it slammed into the U.S. East Coast with winds of about 80 miles per hour (130 km per hour) and pushed inland.

Remnants of the storm churned slowly over Pennsylvania on Wednesday, the National Weather Service said. Winter storm warnings were in effect along the central Appalachian mountains and flood watches and warnings were issued across New England and northern mid-Atlantic states.

U.S. Homeland Security Secretary Janet Napolitano said the storm may be the most expensive in U.S. history.

“Now we are looking at flooding on Lake Erie, possibly Lake Michigan,” Napolitano said. “We’re looking at secondary flooding downstream as rivers fill with the remnants of Sandy and the water has to go somewhere.”

Some 5.7 million homes and businesses in several states remained without power on Wednesday morning, down from a high of nearly 8.5 million, which surpassed the record 8.4 million customers who went dark from last year’s Hurricane Irene.

Sunday’s New York Marathon will go on as scheduled, but Wednesday night’s Halloween parade through Greenwich Village and Thursday night’s NBA game between the New York Knicks and Brooklyn Nets have been postponed.

On Broadway, most of the shows that had been canceled since Sunday were due to resume on Wednesday, the Theater League said. DM

Photo: An aerial view of the storm damage over the Atlantic Coast is seen in the aftermath of Hurricane Sandy in Seaside Heights, New Jersey October 31, 2012. The U.S. Northeast began an arduous slog back to normal on Wednesday after historic storm Sandy crippled transportation, knocked out power for millions and killed at least 64 people with a massive storm surge that caused epic flooding. REUTERS/Doug Mills