Last nail in the coffin for Lance Armstrong’s career 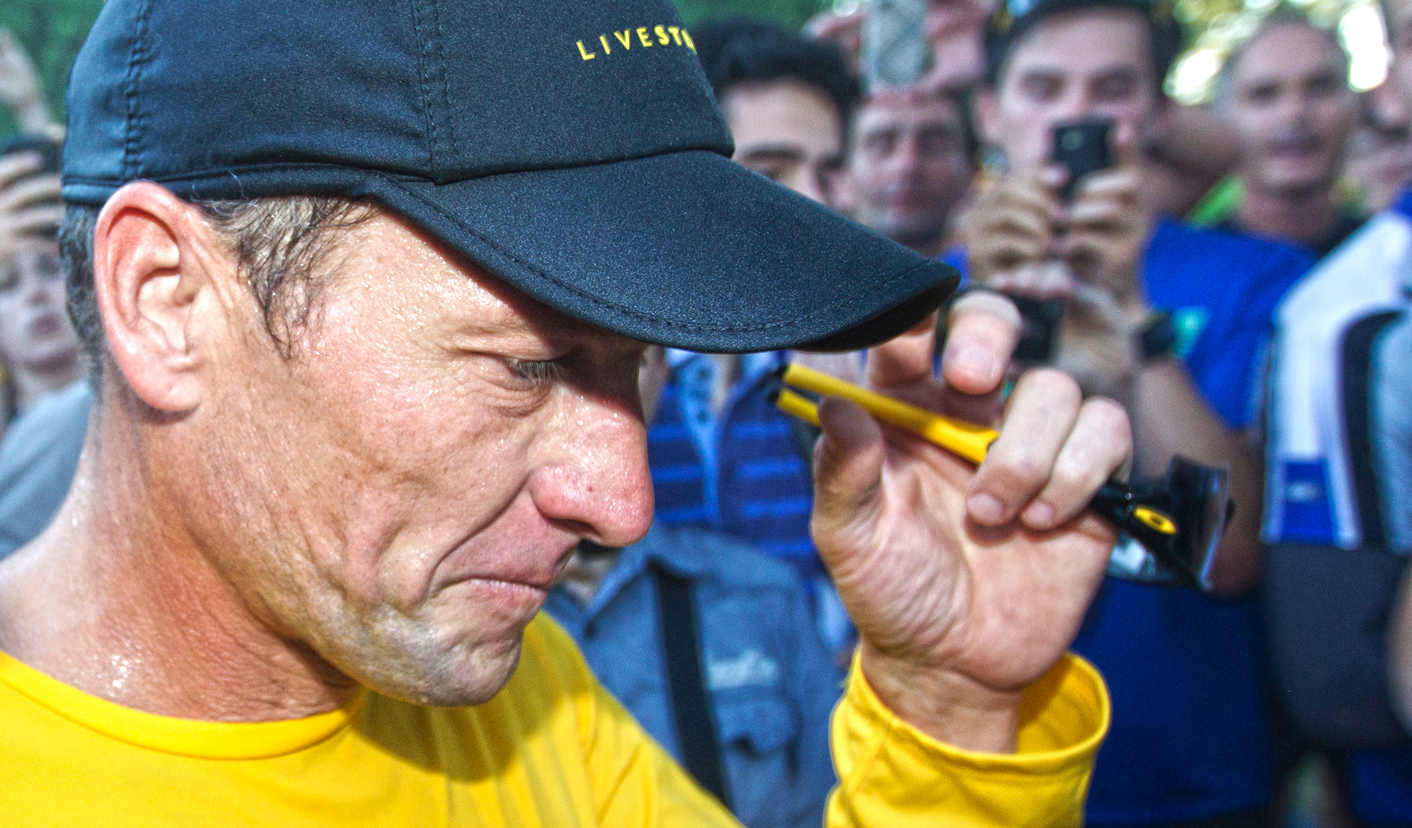 On Wednesday, the United States Anti-doping Agency (USADA) released a massive reasoned decision on the Lance Armstrong case. It’s nothing less than a Gatling gun to the head of the legendary Texan. Armstrong is done. By RICHARD POPLAK.

You have to wonder what it was exactly that Lance Armstrong Inc. thought the USADA was planning to release by way of definitive indictment. A sock puppet show depicting Lance and Tyler Hamilton characters having a conversation about their favourite EPO milkshake lfavour? An allegorical crucifixion musical starring George Hincapie and Anne Hathaway as Lance and Sheryl Crow? A couple of episodes of The Sopranos and a bag of fake blood?

Nope. As it turns out, USADA Chief Executive Travis Tygart went to the wires on Wednesday morning, informing the world that he was sending 1,000 pages of testimony and other damning evidence to the Union Cycliste International (UCI), the World Anti-Doping Agency (WADA), and the World Triathlon Corporation (WTC). Those institutions have taken a wait-and-see position regarding the USADA’s lifetime ban on Lance. Several weeks ago, UCI President Pat McQuaid had publicly questioned why the USADA was being so dilatory in sending along its final review. He now knows the answer to that question. It’s a coup de grace. Lance Armstrong is finished as a professional athlete, his legacy all but erased.

Travis Tygart is the id to Armstrong’s ego, the yin to his yang, the…you get the point. There isn’t much value in asking why Tygart has dogged Armstrong so relentlessly, although people seem to enjoy asking – it’s an existential question as unanswerable as “why is the sky blue?” Let’s just say that it’s his job, and he’s very good at it. Embedded in the USADA’s MO is the Elliot Ness Untouchables mentality – while the world gets drunk illegally, someone has to uphold prohibition until told otherwise. Unquenchable morality: as American as a South Carolina springtime bike race.

What’s more, “Our mission is to protect clean athletes by preserving the integrity of competition not only for today’s athletes but also the athletes of tomorrow. We have heard from many athletes who have faced an unfair dilemma – dope, or don’t compete at the highest levels of the sport. Many of them abandoned their dreams and left sport because they refused to endanger their health and participate in doping. That is a tragic choice no athlete should have to make.”

What, you wonder, distinguishes this newly packaged evidence from all the other evidence that has slithered down cycling’s sewerage pipe? For one thing, it contains testimony from several cyclists who are very well respected, had until now never admitted to doping, and have nothing to gain from the proceedings except a pat on the head from the USADA. Canada’s Mike Barry? One of the best loved, most intelligent men in the peloton. Christian Vande Valde? Wins the UCI Most Huggable Award every year. Tom Danielson? The man with a thousand friends. All three were, until recently, active cyclists, and they have now been banned. Add those names to Frankie Andreu, Tyler Hamilton, George Hincapie, Floyd Landis, Levi Leipheimer, Stephen Swart, Jonathan Vaughters and David Zabriskie, and you have a United States Postal Service (USPS) All Star doping team. Either all these guys are lying (and at least two of them would skin you alive for a Heed gel), or Armstrong is. Which way do you think the UCI will swing on that one?

According to Tygart, “The evidence also includes direct documentary evidence including financial payments, emails, scientific data and laboratory test results that further prove the use, possession and distribution of performance enhancing drugs by Lance Armstrong and confirm the disappointing truth about the deceptive activities of the USPS Team, a team that received tens of millions of American taxpayer dollars in funding.”

The USADA contends that Armstrong was involved in the most extensive doping ring in sports history, a conspiracy governed by a code of silence that makes la cosa nostra look like Chatty Kathy. It wasn’t just about cheating. It was about cheating on an industrial scale, an endeavour so ?lthy that it seems pathological. The whole thing was a daedalic construction, so complicated that the brain swims just thinking about it. How about this, taken virtually at random from the 1,000-page reasoned decision: “The evidence in this case also includes banking and accounting records from a Swiss company controlled by Dr. Ferrari [a long-time Armstrong collaborator] reflecting more than one million dollars in payments by Mr. Armstrong, extensive email communications between Dr. Ferrari and his son and Mr. Armstrong during a time period in which Mr. Armstrong claimed to not have a professional relationship with Dr. Ferrari, and a vast amount of additional data, including laboratory test results and expert analysis of Mr. Armstrong’s blood test results.”

Lance Armstrong came to cycling, found a filthy sport, and systematically industrialised that filthiness. Reading the report is like wading through a river of effluent in a Speedo. The cheating seems like such a waste of time, money and energy that perhaps not cheating would have been the best form of cheating. Yes, everybody was doing it. But Armstrong and USPS were doing it on a scale never seen before.

It’s hard to pick a death blow in the reasoned decision – I have yet to perfect the art of reading 1,000 pages of legalese in four hours – but I like this one for a start: “The evidence is overwhelming that Lance Armstrong did not just use performance-enhancing drugs, he supplied them to his teammates. He did not merely go alone to Dr. Michele Ferrari for doping advice, he expected that others would follow. It was not enough that his teammates give maximum effort on the bike, he also required that they adhere to the doping program outlined for them or be replaced. He was not just a part of the doping culture on his team, he enforced and re-enforced it. Armstrong’s use of drugs was extensive, and the doping program on his team, designed in large part to benefit Armstrong, was massive and pervasive.”

All this being said – wait for it! – Armstrong, as he’ll no doubt remind us in a strongly worded statement, has never tested positive for doping of any kind. This may continue to look good for Armstrong, but it’s going to start looking real bad for the UCI. (It may also be the petard on which the USADA manage to hoist themselves.) How in the name of Fausto Copi could Armstrong NOT have tested positive in the face of all this evidence?

No one comes out of this clean. What happens to Armstrong now is anyone’s guess, but the people he has helped over the years, and the real impact his organisation has made on cancer research, cannot and shouldn’t be wiped away. But he was the godfather of cycling’s doping age, the greatest cheat who ever lived, and the best cyclist on a vein-ful of EPO ever to take to the French Alps.

Thankfully, there’s an antidote to all this. It’s called riding your bike. Take Martyn Ashton, for instance, the id to Armstrong’s ego… well, you get the point. Watch this immediately, and then go for a spin. DM

Photo: Lance Armstrong walks back to his car after running at Mount Royal park with fans in Montreal August 29, 2012. REUTERS/Christinne Muschi