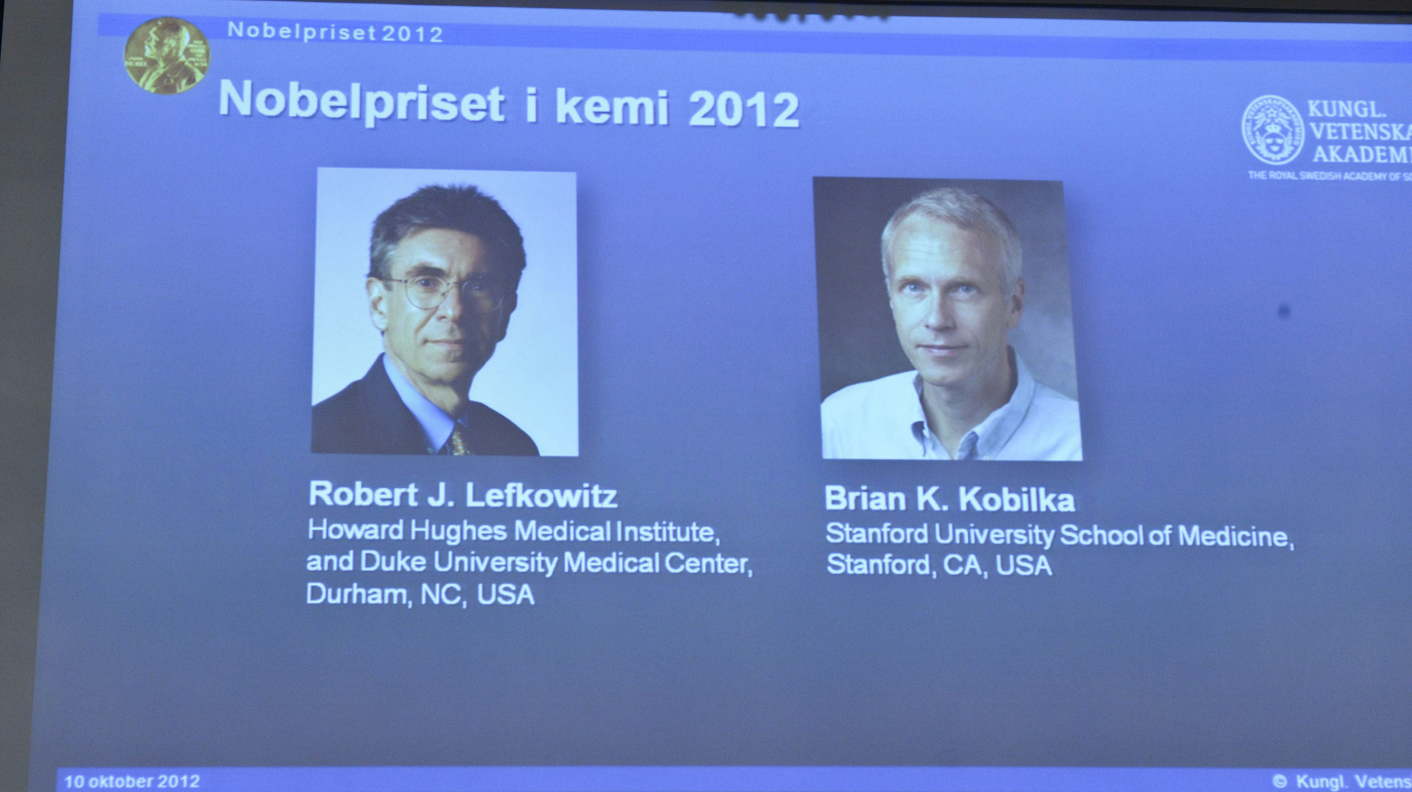 For some scientists, winning a Nobel Prize marks the end of a long and successful career. By Julie Steenhuysen and Ben Hirschler.

But the work, in a sense, is just beginning for newly minted Nobel laureates in chemistry Dr. Brian Kobilka, 57, of Stanford University in California, and his mentor, Dr. Robert Lefkowitz, 69, of Duke University Medical Center in Durham, North Carolina.

“There is still a lot to do,” Kobilka said in a telephone interview from his home in Palo Alto, California, where he learned of his prize early on Wednesday morning. “There is a lot to do.”

In research spanning four decades, the scientists working separately and together have helped to characterize the exact structure of an important class of proteins known as G-protein-coupled receptors or GPCRs, which serve as a main conduit for chemicals to get past a cell’s membrane and be taken up by a cell.

Roughly 1,000 human genes carry genetic codes for the receptors, which affect a variety of functions, from the beating of the heart to the workings of the brain and even how cells in the nose detect odors.

A subset of these receptors, some several hundred, respond to hormones and neurotransmitters in the body, and these have been targets for drug discovery, in many cases even before researchers knew these receptors existed.

About 40 percent of drugs already use these receptors or doors to get inside of cells, including Eli Lilly’s antipsychotic drug Zyprexa and Bristol-Myers’ diabetes treatment Byetta.

The problem is that drugs often act on more than one receptor, and so they have side effects.

“We hope the more we know about the structure of these proteins, the more we’ll be able to develop safer, more effective drugs,” Kobilka said in the interview.

Lefkowitz set out in the 1970s to prove these receptors existed, and that they could be studied, cloned and manipulated to develop new drugs.

Kobilka, who worked in Lefkowitz’s lab in the 1980s, extended that research by helping to define the exact crystal structure of every atom of these receptors at a molecular level, something that had eluded researchers.

“Their findings have shone a light onto the staggeringly complex world of how hormones, neurotransmitters and drugs control cellular function and opened the door to the development of new therapeutics with potential to treat a vast array of diseases,” said Bernadette Byrne of Imperial College London.

“Far and away, the most significant class of drug proteins are these GPR-coupled receptors,” said Topiol, adding that Kobilka’s work characterizing the structure of these proteins in 3D “opened up a watershed of new opportunities for drug discovery.”

Topiol, who has been in the early stages of drug design for the past three decades, said people traditionally talk about drugs using a lock and key model.

“The drug is the key, and you are designing it to be a perfect match for the lock you are interested in,” he said.

But while researchers had detailed information about the keys, for years there was nothing known about the lock itself. Now researchers are using Kobilka’s discoveries to precisely characterize the structure of those GPCR locks.

“There are now 14 or 15 published GPCR structures, several from Kobilka’s laboratory, and new drugs are being designed using the new knowledge of GPCR structure and function that will eventually improve medical treatments,” said Richard Henderson of the University of Cambridge.

Fiona Marshall, founder and chief scientific officer at British-based Heptares, a private drug company that specializes in GPCRs, said many of the drugs that currently target these proteins – beta-blockers, antihistamines and atypical antipsychotics for schizophrenia – represent the low-hanging fruit.

She sees lots of potential to develop new medicines as well as making more targeted versions of existing treatments with fewer side effects.

“The breakthroughs that the Nobel Prize relates to is understanding the structure of the proteins at the molecular level,” she said.

“That means you can actually design a compound using knowledge of the protein structure, which should result in much better and safer medicines that are more specific to the target,” she said.

Heptares, which has done drug development deals with large drugmakers including AstraZeneca, Takeda, Novartis and Shire, is working on one of the first drug candidates to be developed using the new protein structures, which have been characterized in the past few years.

The drug, a molecule that the company is developing in partnership with Shire, targets neurological diseases and could enter clinical trials as early as next year.

Other illnesses that might benefit from these discoveries include Alzheimer’s, schizophrenia and metabolic diseases such as diabetes.

“A lot of existing drugs that target GPCRs could be improved on because they often hit multiple different GPCRs and therefore have side effects. For example, atypical antipsychotics hit around a dozen GPCRs, whereas probably only one or two are important for the therapeutic effect,” she said, noting that the other ones cause weight gain and sedation. DM

Photo: Images of researchers Robert Lefkowitz and Brian Kobilka (R) of the U.S., who won the 2012 Nobel Prize in Chemistry, are seen on a projector during a news conference by the Royal Swedish Academy of Sciences in Stockholm, October 10, 2012. Two American scientists Lefkowitz and Kobilka have won the 2012 Nobel Prize for chemistry for groundbreaking work on a key family of receptors which enable cells to sense their environment, the prize committee said on Wednesday. REUTERS/Bertil Enevag Ericson