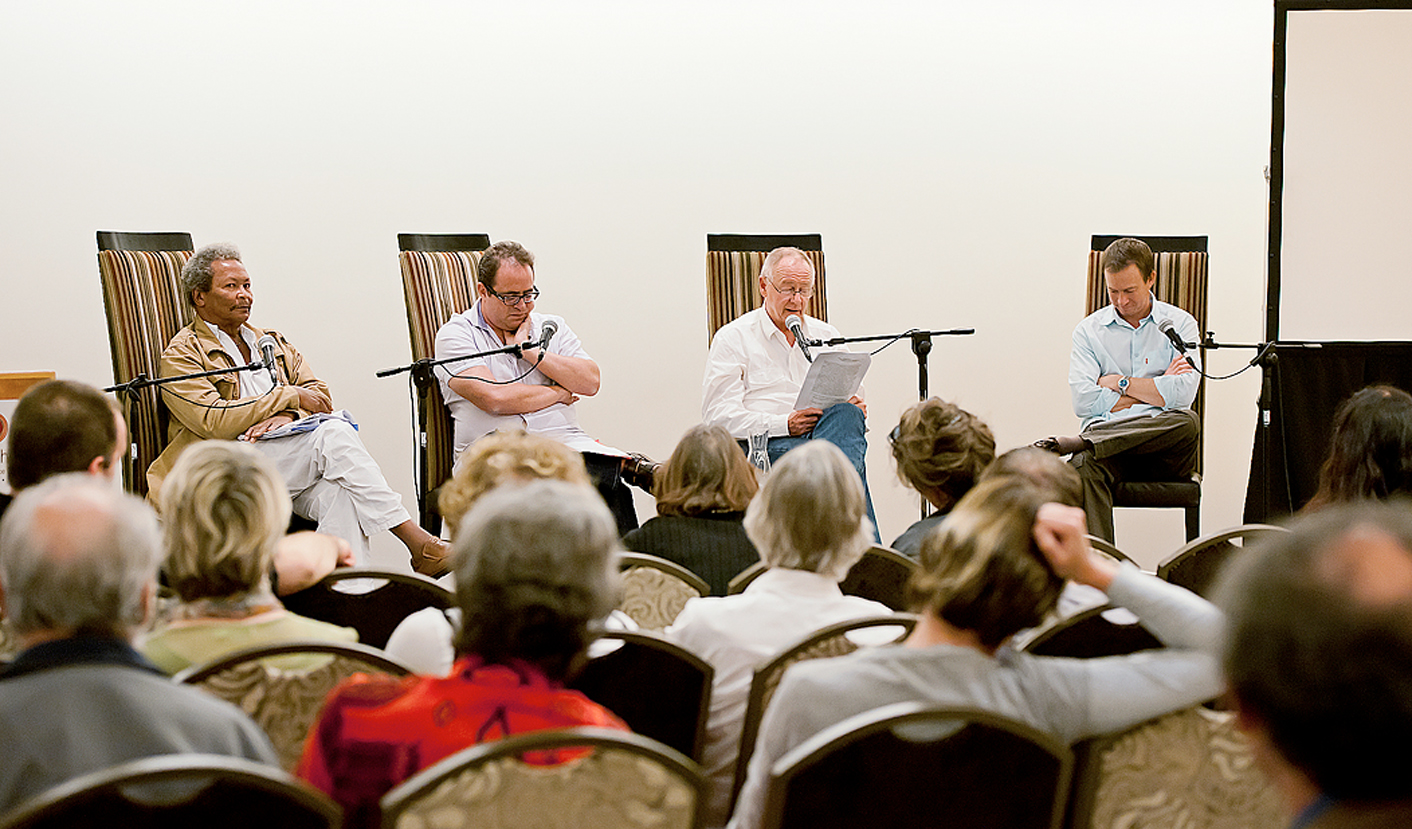 Cape Town’s Open Book Festival is only in its second year of existence, but it may be establishing itself as the pre-eminent literary festival in South Africa. The sheer scale of the festival, and the high profile of writers it’s able to attract, is putting this fledgling venture ahead of the pack. By REBECCA DAVIS.

In a country where you only have to sell 3,000 copies of a book for it to be considered a bestseller, even the idea of a five-day literary festival may seem over-ambitious. But that’s precisely what the Open Book Festival has just managed to pull off, and they’ve done so triumphantly. If the number of events happening simultaneously sometimes meant that proceedings were characterised by a feeling of good-natured chaos, nobody seemed to mind. Audience support was enthusiastic, with a good few events being packed to the rafters.

When Book SA editor Ben Williams and Capetonian bookshop owner Mervyn Sloman announced plans for the first festival last year, many thought they were aiming too high. After all, South Africa already has a number of well-run literary festivals (such as the Franschhoek Literary Festival, and the recently-held Mail & Guardian Literary Festival), and, as mentioned, the book-buying public in this country is an endangered species.

But the audaciousness of Sloman and co-organiser Frankie Murrey is paying off. The 2011 line-up was pretty impressive, with 142 events and internationally well-known writers like Jane Bussmann and Hari Kunzru. But 2012’s festival blew the previous year out of the water: while a particularly stellar cast of international names titillated starstruck Capetonian readers, the festival was also a reminder of the depth of literary talent in our country.

To name only a few of the international authors: among them a constellation of Man Booker Prize winners, short-listers and other literary stars including Alan Hollinghurst, Kiran Desai and Lionel Shriver. Bestsellers Margie Orford, Deon Meyer and Lauren Beukes rounded out the group of heavy hitters. And then there were those with new books to punt: among them, writer Diane Awerbuck and political analysts including Xolela Mangcu.

It was truly a mouthwatering lineup, necessitating some fairly agonising decisions about which event to attend. The international authors attracted consistently large audiences, but there was solid support for local writers too. Sometimes the low-profile events out-performed the big-ticket numbers: as an illustration, the launch of My First Time – a compendium of South African women’s writing about sex edited by Jen Thorpe –  was funny, warm, intimate and moving. Because the book itself is based on submissions to a blog, it contains contributions from women who mainly wish to stay anonymous. For the event, however, Thorpe had assembled four of the writers who were willing to go public with stories ranging from the devastating – sexual assault – to the humorous: well-known strategist Sarah Britten’s account of finding out about sex for the first time.

The international stars didn’t disappoint, however. British writer Alan Hollinghurst swept all before him in the literary world with his third novel The Line of Beauty, but he was here to publicise his most recent effort, The Stranger’s Child, about which opinion is a little less uncritically effusive. (I loved the novel and recommended it to practically everyone I knew, all of whom found it eventually tiresome. It is extremely long.) In the flesh, Hollinghurst came across as witty and self-deprecating, perpetually poking fun at the slowness with which he writes his novels – he publishes on average just two books a decade. His contemporaries’ books piled up on his coffee table at embarrassing speed, he said, while he sometimes writes only a few sentences per day.

Hollinghurst was pragmatic, rather than romantic, about the role writing plays in his life: “I’m very happy not writing, but it’s essential to my sense of self,” he said

South African author Damon Galgut (The Good Doctor, In A Strange Room) took this one step further: “I fantasise about not writing when I’m writing,” he said.

While Galgut revealed himself to be no fan of the literary critic, Hollinghurst declared himself “genuinely indifferent to criticism”. He did note, however, that “Everyone likes even the most stupid praise”.

Someone who might quibble with that is fierce American author Lionel Shriver, who said that she was deeply embarrassed by compliments and found the company of sycophants to be grating. Shriver must presumably have had to fend off many sycophants since 2005, the year when she published her international blockbuster We Need To Talk About Kevin. These days Shriver doesn’t want to talk about Kevin at all, but unfortunately the rest of us still do, so at literary festivals like Open Book she is inevitably bombarded with ‘Kevin’-related questions at the expense of her other ten novels.

Shriver was technically here to flog her latest novel, The New Republic, which she actually wrote in 1998 and failed to find a publisher for at the time. Shriver explained to Open Book audiences that she attributed this to the novel’s subject matter, terrorism, which nobody was interested in before 9/11. It seems, however, that the real reason why the book was repeatedly passed up may be because it is, well, bad. The Guardian called it “preposterous, unengaging and extremely dull”, and The New York Times wrote it off as “ghastly”. Reviews have been almost uniformly savage.

Nobody would have dared to bring this up with Shriver, I suspect, because she seemed a little terrifying: acerbic, cutting, and distinctly not one to suffer fools gladly. Former Fairlady editor Ann Donald, who was tasked with facilitating an “in conversation with” talk with Shriver, exuded palpable relief when she reached the end of the event without being publicly chided by Shriver.

Certain audience members didn’t get off so easily: an individual who asked “Why Lionel?”, with regards to her teenage decision to change her name, was advised to consider consulting Wikipedia.

“Are you angry? What makes you angry?” asked Donald at one point.

“Virtually everything,” Shriver responded. She explained that she had recently undertaken an experiment where she listed her emotions in hierarchy of frequency experienced, and right at the top was irritation. “Most everything is bad,” she said darkly.

A note of light was inserted into Open Book proceedings by the presence of Guardian columnist John Crace, who was also a big hit at last year’s festival. Crace has produced the Guardian’s hilarious ‘Digested Reads’ feature for the past 13 years, where he takes prominent books of the moment and summarises them in 700 words while parodying the style of the author. (Crace now has a book out where he does the same in slightly longer form to classic reads of the twentieth century, titled Brideshead Abbreviated.)

Sloman described this year’s festival as “a huge step up from last year’s”, saying that things had run very smoothly, with the exception of one author throwing a fit about the lack of a smoking room in the Fugard Theatre, and another not arriving for his or her designated appearance. He also said that he had been approached by more than one Johannesburg publisher who had suggested to him that it would be very difficult to run a festival on the scale of Open Book in Johannesburg. This is surely debatable (see, for instance, the upcoming line-up of book review evenings at Joburg Theatre).

Nonetheless, there is a genuine possibility that the Open Book festival may grow, in forthcoming years, to rival the size and stature of India’s Jaipur Literature Festival or England’s Hay Festival. For this to happen, they will need to sustain and extend their existing sponsorship, and possibly settle on a permanent venue solution. They will also probably need to counter accusations of elitism and a reliance on celebrity authors, two charges Jaipur and Hay continually fend off. But for now, the Open Book team certainly seem to be doing a lot of things right. DM