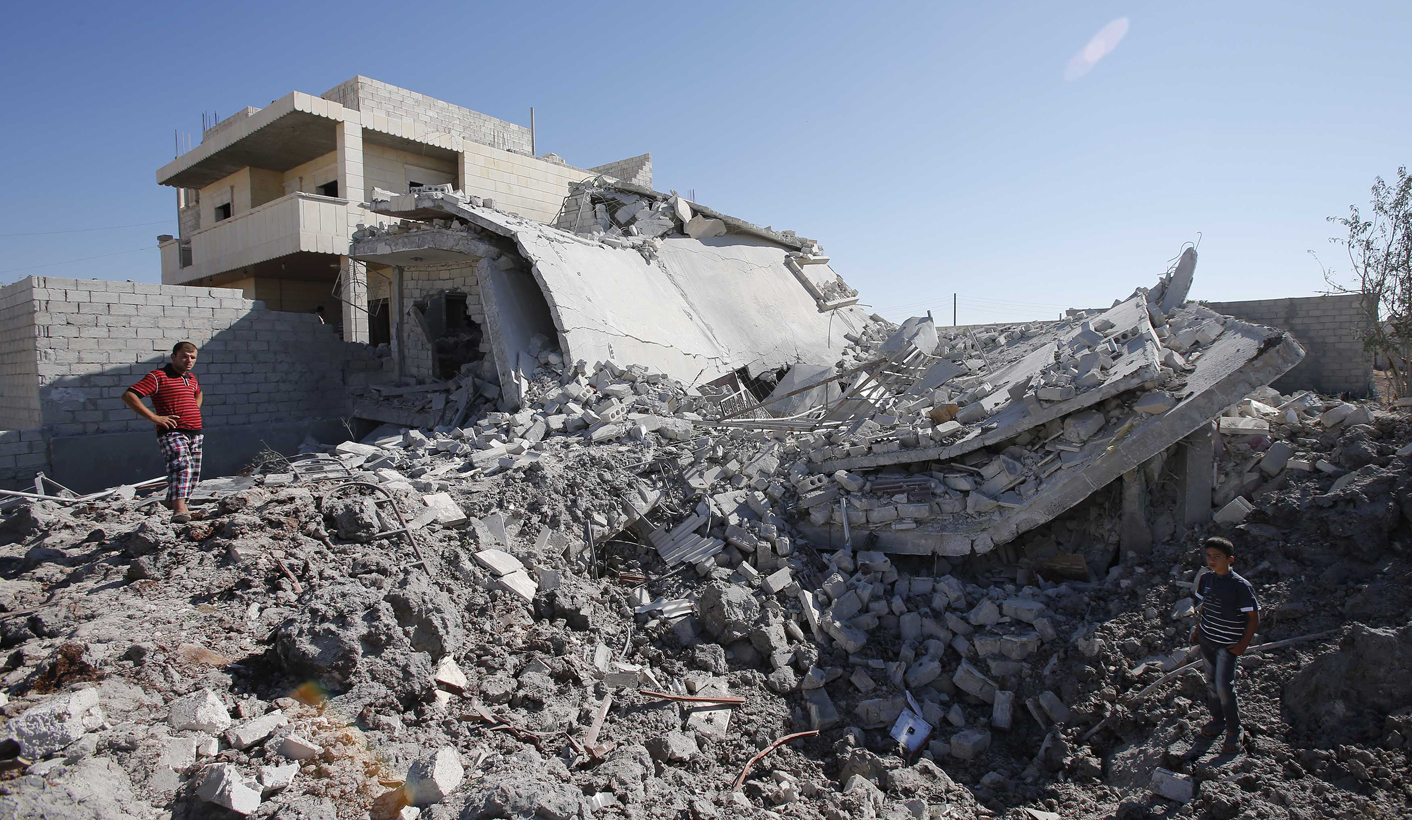 In northern Syria, 18 bodies were found in the rubble of a house bombed by a Syrian warplane in the rebel-held town of al-Bab and 13 more are missing, an opposition watchdog group said.

Bulldozers backed by combat troops demolished buildings in the poor Tawahin district, near the Damascus-Beirut highway, activists and residents said.

“They started three hours ago. The bulldozers are bringing down shops and houses. The inhabitants are in the streets,” said a woman who lives in a high-rise building overlooking the area.

Syrian authorities restrict independent media access, making it hard to verify accounts of the conflict from both sides.

“This is an unprovoked act of collective punishment. The rebels had left, there are no longer even demonstrations in the area,” said Mouaz al-Shami, a campaigner collecting video documentation of the demolitions.

“The regime can’t stop itself from repeating the brutality of the 1980s,” he said, alluding to mass killings and wholesale destruction in the city of Hama in 1982 under Assad’s father, the late Hafez al-Assad, who ruled Syria for 30 years.

Hama had been a centre of a Sunni Muslim revolt in the 80s. Sunnis have also been the backbone of the uprising Bashar al-Assad is now facing.

The Assad family and most members of the ruling elite belong to the minority Alawite sect, an offshoot of Shi’ite Islam.

“The regime has not changed. It will not,” Shami said.

Activists also reported the razing or burning of at least 200 houses and shops in the old part of the southern city of Deraa in the past few days. Army shelling had largely emptied the area, prompting 40,000 people to flee to Jordan.

Opposition campaigner Rami al-Sayyed said: “This the first time we see a systematic campaign to raze houses and shops using direct means like bulldozers that seems to be concentrating on Damascus and its environs.”

Bulldozers entered the Khashabeh area of the northern Damascus suburb of Harasta on Monday and began razing houses in the neighbourhood.

The latest wave of demolitions follows the destruction of dozens of buildings in an area next to Tawahin in Damascus on Sunday and in the Sunni district of Qaboun last month.

“I visited Qaboun yesterday. It is no longer a dense neighbourhood. I could see from one end of the neighbourhood to the other because so many buildings have been razed,” said another Damascus activist who gave her name only as Yasmine.

“This method is now being used to try and humiliate Damascenes.”

The army, which appears to have regained control of Damascus proper after an insurgent offensive that began in July, shelled outlying southern and eastern districts overnight to try to drive out rebels still operating there, opposition groups said.

At least two people were killed in the southern neighbourhood of Qadam, they added.

Video footage from the eastern suburb of Irbin showed the bodies of three young men shot in the face inside a house, their blood spattered on the walls and floor

“This is the latest massacre of Assad’s army in Irbin,” an activist speaking in front of the camera said.

The air raid in which at least 18 people were reported killed in the northern town of al-Bab, in Aleppo province, was another sign of the Syrian military’s increasing use of its planes and helicopters to attack rebel-held areas.

Five women and two children were among the dead, according to Rami Abdulrahman of the British-based Syrian Observatory for Human Rights. “People in al-Bab say there are 13 more people trapped under the building after one big attack,” he said.

He said five people had been killed and 27 wounded by a car bomb blast in the Damascus district of Jaramana.

Syria’s state news agency SANA said earlier that the wounded included women and children but did not give details on fatalities. No group has claimed responsibility for the attack.

A bomb killed 12 people in the same district a week ago in what state media called a “terrorist” attack. Opposition sources said the security forces were behind it.

More than 20,000 people have been killed in Syria since initially peaceful protests against Assad erupted in March 2011. DM

Photo: Civilians stand near a destroyed house after a Syrian Air Force fighter jet launched a bomb early this morning in the city of Azaz September 3, 2012. REUTERS/Youssef Boudlal