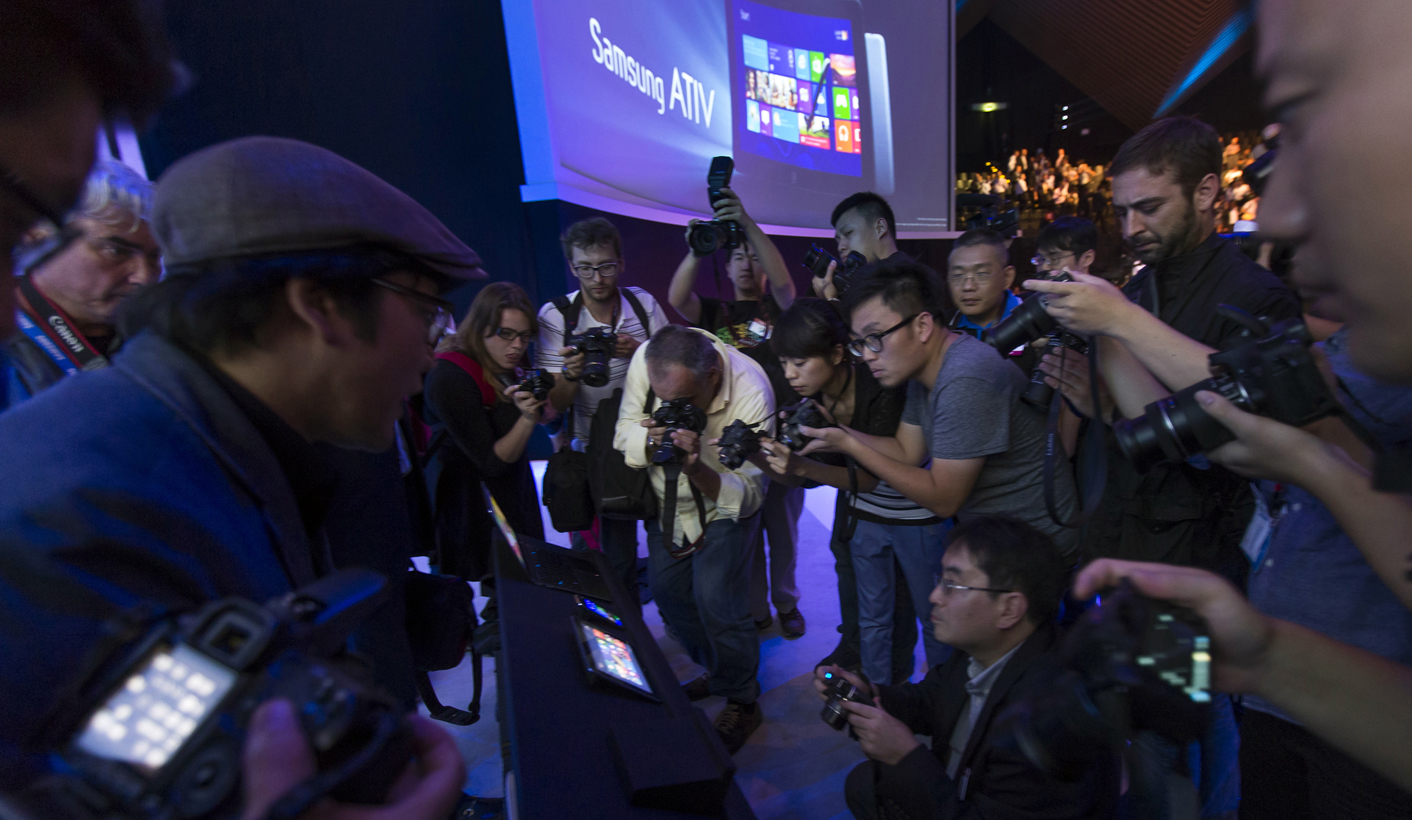 The brief announcement on Wednesday at a Berlin electronics show comes amid expectations that smartphone makers may turn increasingly to Windows devices after a U.S. jury decided many of Samsung’s Google Android-based phones infringed Apple Inc patents.

“It looks like a good phone, and seems like a pre-emptive announcement ahead of Nokia,” said Sid Parakh, an analyst at investment firm McAdams Wright Ragen, of the Samsung phone.

“Microsoft or Windows never got their best teams, never got their best designs, just because Android was doing so well. With the change in the legal environment, there’s a case to be made that Samsung will likely shift some of those resources to broaden out or diversify their own exposure.”

Nokia, the ailing Finnish mobile firm, once the world’s leading producer of phones but now struggling to reverse losses, is due to unveil its new Lumia line of smartphones using Windows Phone 8 in New York on Sept. 5.

Samsung’s new phone called ATIV S — tacked onto the end of a long news conference in Berlin that focused on other products — may elevate expectations for the Lumia. Samsung’s ATIV S Windows phone sports a high-end 4.8-inch display, Corning “Gorilla” glass, and an 8-megapixel rear camera and 1.9-megapixel front-facing camera, Microsoft posted on its official blog on Wednesday.

“Expectations for a 40 megapixel or possibly 20 megapixel camera model are running high. If Nokia does not unveil a monster camera handset next week, many will be disappointed,” said Tero Kuittinen, analyst at mobile analytics firm Alekstra.

But “this leaves Nokia plenty of room to draw a clear contrast with its upcoming announcement.”

Samsung’s Windows-based smartphone, introduced on Wednesday, marks the first in a “big lineup of new hardware” from the South Korean company based on Microsoft’s software, Microsoft executive Ben Rudolph said in a blog posting.

Analysts say the introduction of Samsung’s Windows phone may be designed to assuage concerns that Microsoft will favor Nokia, whose Chief Executive Stephen Elop — himself a former senior Microsoft executive — has staked its future on the Windows platform.

“The fact Samsung was allowed to be the first to announce is Microsoft’s backhanded way of letting other vendors know that Nokia is not getting special treatment,” Current Analysis analyst Avi Greengart said.

But Jack Gold, an independent mobile consultant who runs J. Gold Associates, argued Samsung had signalled its commitment to Windows for a while, but Nokia will remain the primary driver of the new breed of Microsoft-powered devices.

Microsoft gave a preview of its Windows Phone 8 software in June, and promised the first phones would be on the market by the autumn.

Windows Phone 8 looks similar to, and is built on the same core code as Microsoft’s upcoming Windows 8 operating system, but is not the same product. Windows 8, which will run on tablets and PCs, is scheduled to launch on Oct. 26.

Samsung said the ATIV phone would hit stores in the October-November period but did not give an exact start date.

On Wednesday, the Korean corporation also showed off a slew of tablets using Windows 8 software and the second generation of its popular Google Android-based Galaxy Note phone-cum-tablet “phablet” in downtown Berlin.

Samsung has sold some 10 million of its original Galaxy Note devices, creating a new product category which has smaller screen than tablets, but bigger than smartphones.

“I am pretty confident it will even outsell its predecessor,” said JK Shin, Samsung’s chief of mobile business.

Samsung hopes the new device will take the focus away from its loss of the court case. Apple is now seeking speedy bans on the sale of eight Samsung phones, moving swiftly to turn legal victory into tangible business gain.

Samsung hopes the phablet upgrade will lift any post-Apple gloom. The new version of the Note features a thinner and slightly bigger 5.5-inch screen, quad-core processor, the latest version of the Android operating system called Jellybean, and improved stylus function.

“There won’t be huge innovative changes in design, but the Note 2 will feature quite a few improvements and enable Samsung to carry on its strong sales momentum in the category,” said Lee Sun-tae, an analyst at NH Investment & Securities. “With the launch, Samsung will also be trying to turn around downbeat sentiment after the U.S. legal defeat.”

Apple did not include the Note and other newly unveiled Samsung products in its original lawsuit. But the company and its lawyers are expected by many legal experts to try and use last week’s legal victory to go after future gadgets, especially because the jury found infringing features in Samsung phones such as pinch-and-zoom and bounce-back — common in Android.

Shares of Microsoft finished up 2 cents at $30.65 on Wednesday. DM