Julian Assange and Joseph Heller: A match made in prison 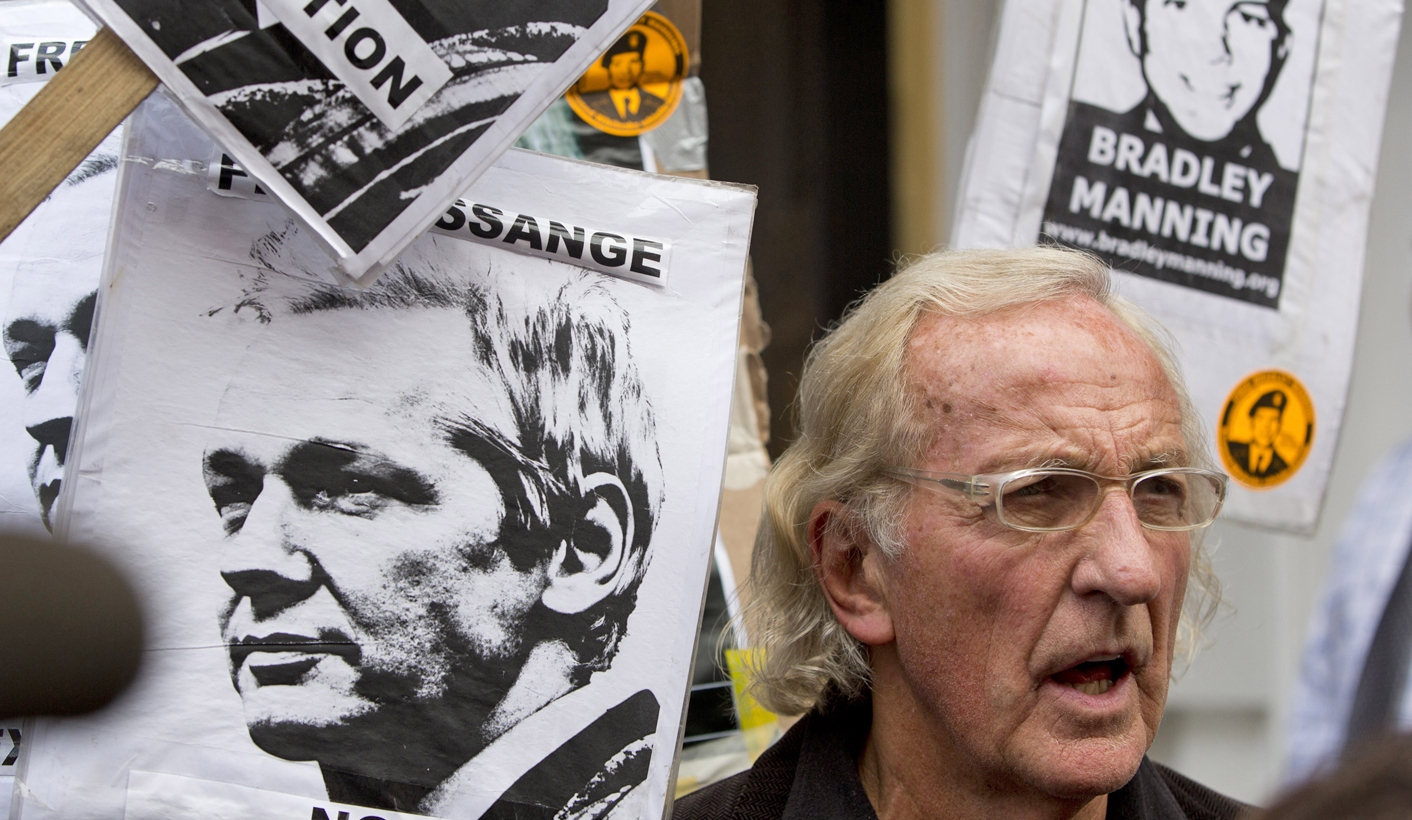 If, like the editors and producers at the world’s major media outlets, you’ve been closely following the most excellent adventures of Mr Julian Assange, you’ll probably be asking yourself a question: what does he do with all his free time in that gilded cage at London’s Ecuadorean embassy? So here’s your answer: he reads, watches movies, and talks on the phone to John Pilger. But is that enough to keep him from going insane? By KEVIN BLOOM.

Man, you couldn’t make this stuff up. It seems Julian Assange is whiling away the hours in his room in London’s Ecuadorean embassy with his nose deep in a copy of Joseph Heller’s Catch-22. In fact, scratch that. You could make this stuff up. Why would Assange be reading anything else? The misadventures of Captain John Yossarian, B-25 bombardier in the US Army Air Forces, is perfect reading material for a gentleman who’s damned if he does and damned if he doesn’t.

And so we are compelled, with more than a little delight, to quote the passage from chapter five, page 56, of that fine work: “There was only one catch and that was Catch-22, which specified that a concern for one’s safety in the face of dangers that were real and immediate was the process of a rational mind. Orr was crazy and could be grounded. All he had to do was ask; and as soon as he did, he would no longer be crazy and would have to fly more missions. Orr would be crazy to fly more missions and sane if he didn’t, but if he were sane he had to fly them. If he flew them he was crazy and didn’t have to; but if he didn’t want to he was sane and had to. Yossarian was moved very deeply by the absolute simplicity of this clause of Catch-22 and let out a respectful whistle.”

As a general critique of bureaucratic operation and reasoning, Heller’s masterpiece would no doubt appear to speak to Assange with a voice as authoritative and divine as the one Moses is purported to have heard on Mount Sinai. The double-binds, the knots of self-contradictory logic, extend in ever-widening circles from the intimate and internal world of Assange all the way to the uber-collective and external world of international diplomacy—and then back again, because the circles, after all, open and close with Assange himself.

It would take a Talmudist of the highest order to unpack all of this properly, but given that Maimonides is not readily to hand, a humble journalist will have to do. Starting with Assange, then—what’s his Catch-22? On the simplest level, it’s that, in trying to avoid prison, he’s put himself into one. He cannot leave the Ecuadorean embassy in the UK because the UK has an extradition agreement with Sweden and Sweden wants to try him for a crime he says he didn’t commit. Also, en route to Sweden, he doesn’t want to be double-extradited to the United States for a crime he probably knows he did commit: “espionage”, as per a secret and sealed indictment that’s been on the books for over a year, referring as it does to the global diplomatic crisis instigated by the leaked US cables in 2010.

Of course, then there’s the fact that the United States is not going to drop the charges of espionage just because Assange prefers a prison of his own making to a prison of theirs. They will push for his extradition wherever he happens to be in the world, and he can’t stay in the Ecuadorean embassy forever. Or can he?

To jump out of that closed loop and into the next one, there’s Ecuador and its hapless president Rafael Correa, who expressed “relief” at receiving assurances from London last Thursday that ruled out the possibility of British authorities forcibly entering his country’s embassy (question: when Assange heard the helicopters hovering above, did he think of Orr?) Correa granted diplomatic asylum to Assange to make a larger point about the hegemonic evils of the United States, but his stand pointed out to him his own Catch-22: the thing about hegemonies is that they’re hegemonic (as in, they get shirty when they lose control).

And the same Catch-22, although in reverse, would apply to the UK—if they invade the Ecuadorean embassy, they would be in contravention of the Vienna Convention, which would make them guilty in the eyes of the world of everything Assange says they’re guilty of (to wit, being a vassal of the evil hegemonic empire).

Which brings us back to Assange and another of his own Catch-22s. During his riveting performance from the balcony of the Ecuadorean embassy on Sunday, 19 August, he thanked the nation of Ecuador for taking a “stand for justice” in giving him political asylum, while warning that the United States risked shunting the world into an era of journalistic oppression. Err, Julian, mate, two words for you—Emilio Palacio. Remember? The Ecuadorean journalist who fled to the United States last August after he and a trio of his newspaper’s board members were sentenced to three years in prison in a dispute over coverage of President Rafael Correa?

Circles within circles. To avoid going insane, it’s necessary now to jump out of them completely, and to ask something about Assange which the bureaucratic authorities in Heller’s book will until hell freezes over (or until it is out of print, whatever comes first) be asking about Orr: might he be insane?

This question is not as instantly inadmissible as lovers of justice and truth—like, for instance, the Justice4Julian online activist group—might want it to be. The term “messiah complex” has been bandied about before (see quote below), and given that Assange’s supremely contradictory internal universe is mirrored (as suggested above) to an uncanny degree in the external universe of geopolitical diplomacy, it would appear that the conditions of (God forbid) paranoid schizophrenia are firmly in place. The allusions to Moses and the Talmud in the opening passages of this article are no accident.

Heather Brooke, a journalist who first met Assange when he was convinced a sniper was targeting him through the windows of a conference centre, recently told the Guardian this little anecdote: “I later heard from two other women who said Assange pulled the same ‘poor little lost boy’ trick on them in an attempt to finagle his way into their homes. I said that was not how I conducted interviews. He complained that I didn’t have a maternal instinct, adding in drama-queen fashion: ‘I have two wars to stop.’

“I replied: ‘Yeah, it’s a tough life being a messiah.’ His response left me speechless: ‘Will you be my Mary Magdalene, Heather? And bathe my feet at the cross.’”

Thankfully, John Pilger, himself a paragon of sanity and journalistic even-handedness, thinks Assange is just the bees’ knees, the most in-touch and rational human being on the planet. As he told the Guardian in that self-same expository piece on the man’s character (“Who is Julian Assange? By the people who know him best”, a must-read)

“The jealousy and envy [Assange] attracts often come from those aware of their own collusion with power and unforgiving of one who refuses to join their incestuous club. Personally, I find him the best of company: visiting him at the Ecuadorean embassy or in long phone conversations, often in the early hours of the morning, we share a similar black humour. The other night, we mined Joseph Heller’s Catch-22. I took him over the movie, along with Dr Strangelove and Borat. Given his restless energy, his spirits are remarkable in the circumstances; and he’s fortunate to have the support of a group of unflagging, thoroughly impressive people, not least his mother, Christine.”

Borat? Dr Strangeglove? His mother Christine? I’m changing my mind again and reinstating the first line of the first paragraph. You couldn’t make this stuff up. DM