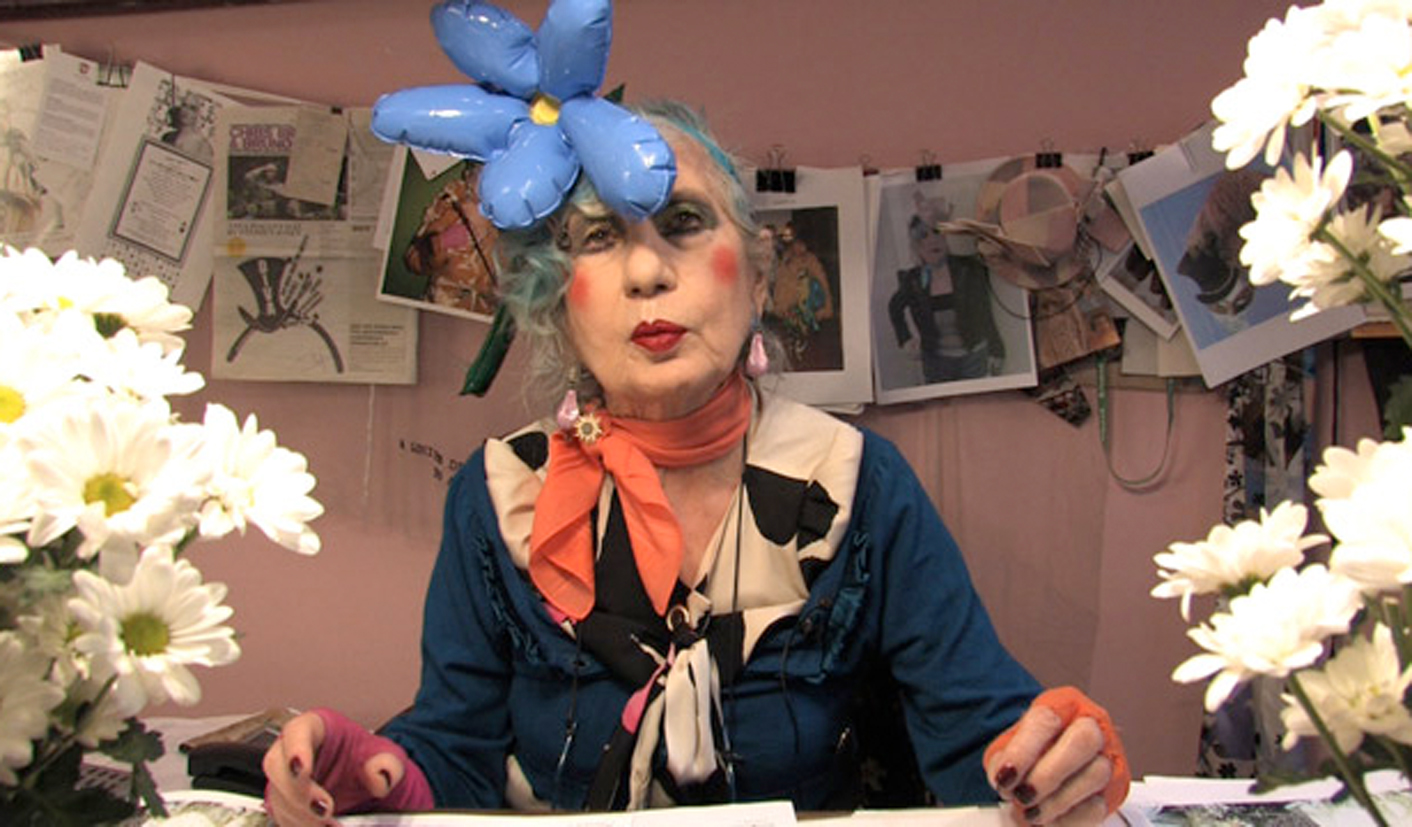 If style is one sense of expression through clothes, a je-ne-sais-quoi that makes someone unique, a lust for life of bright colours and embellishments, then Anna Piaggi, the statement herself, had it. By EMILIE GAMBADE.

Born in Milan in 1931, a time where fashion in Italy was ruled by the original Elsa Schiaparelli, (“the Italian artist”, as Coco Chanel once called her with contempt), Anna Piaggi was a priestess of eccentricity, a woman to look at; a style icon wrapped in colours and exaggerated makeup, her walking stick and peerless prose always on hand, an extreme hat toping her head, rewarding a face best described as a piece of cubist art. She was a muse and designers’ restless chaperon who would say confidently “I am a synthesizer”.

Together with Isabella Blow, Piaggi, the blue-haired woman whose hats only equalled her kaleidoscopic garments, was indeed a synthesizer. She would reinterpret contemporary trends, giving righteousness to old-fashioned vintage clothes, mixing haute couture garments in improbable ways; she could walk to a soirée wrapped in a Union Jack flag when minimalism was in fashion and total Chanel look deemed appropriate.

In the 1950s, Piaggi left her family to travel the world as an au pair; she later joins the publishing house Mondadori as a translator, applying her skills on nothing less than Socrates’ works. She also sharpened her passion for print and the media, awakening an intellectual mind that would soon translate essential fashion elements into mesmerising collages looked for by an entire profession.

She married photographer Alfa Castaldi in 1962; a post-war reporter in Milan, he was a sophisticated man with a flair for pictorial experiments. Two outsiders paired up for the better; they applied their talent and unique intelligence on fashion, producing distinctive stories until his death in 1995.

As a prolific fashion writer, Piaggi started her career as editor of Arianna, an Italian women’s magazine, signing stories for Panorama, Settimana Incom and the desirable Vanity Fair. In 1988, she joined what she called her “beloved” Vogue as a contributing writer and headed a wide-spread, colour-splashed theme-inspiring column for the fashion intelligentsia, the doppie pagines – double pages spread – in Vogue Italia; the DPs set the fashion pace for the next 23 years. In her sharp tone, she depicted trends, shaping tomorrow’s motion, bringing together bits and pieces of a moda she carried so dramatically. The doppie pagines captured trends and fashion fundamentals like butterflies and pinned them down into fascinating collages of ideas, words, images and pictures. In two pages, Piaggi created what Vogue Italia Editor-in-Chief Franca Sozzani called “the spinning variable” or “visual stimuli”, something exceptional that would surprise the reader in every issue.

Of Italian Vogue, Piaggi said it was “a special theorem. Both a filter and a document of fashion, which, on its pages, becomes truly unique and inimitable.” She was an attentive observer of her time, a fashion pioneer who through her columns gave short snapshots of what tomorrow would bring. One of her DPs, headlined “La Bõina”, read:

“The basque beret is called ‘boina’ in Spanish (with the accent on the ‘o’) and ‘traxpela’ in Basque. The ‘boina’ has a long style pedigree: it was Chanel’s favourite headgear at Biarritz, Hemingway’s at Pamplona, and the Duke of Windsor’s at San Sebastian. And for Christobal Balenciaga, born in Guetaria in the Basque region, it was the natural hat.”

And voilà, in few words, the beret was back. Her interpretation was personal, dazzling, effervescent; her style extraordinary, fun, and as Karl Lagerfeld said, ‘a fight against banality’. Piaggi was inevitable, like death or taxes; physically, verbally, pictorially, she was a presence in a world ruled by women wearing the latest trends like 3D copies of few reigning magazines. She chopped her hair off to welcome the original hats designed by her friend Stephen Jones because it helped her think and because “it (completed) the silhouette. In fashion as in photography, everything is a matter of contour.”

She was an original, a bright bird flying over the cuckoo’s nest.

Being an eccentric was not without faux-pas. Her Prussian navy blue coiffure happened thanks to an undesirable chemical reaction, a mistake she “happily and lightly” embraced. Women’s Wear Daily stated that Piaggi, who was a guest at Paloma Picasso’s wedding, had her hat set afire when she walked pass a candelabra. “She is not pretty,” said Lagerfeld, “she is worse.”

Piaggi was the lady who had a charming, almost magical way of turning garments into poetry, every day rewriting a new fashionable score of colourful notes. She didn’t dress to impress, she dressed with attention, because she liked it, no matter the place or the occasion and she paved the way for the avant-gardistes Tavi Gavinson, Anna Del Russo and maybe, the ultimate, meat-dress fashionista, Lady Gaga.

Yet, she considered herself a work in progress. Her eccentricities had no exuberance; she was audacious but considerate and once said in an interview to Madame Figaro, “I dress the way I write; I paint my own portrait like a collage, with a self-control fashion victims will never have… I am incapable of drawing or sewing…” print was the language she knew the best. Her work and personal style left an imprint on an industry overwhelmed with references. Fashion Algebra, a retrospective of the DPs published at the end of the 20th century, is considered as a fashion textbook. In 2006 the Victoria and Albert Museum of London showcased a flamboyant selection of Piaggi’s complete outfits, “Anna Piaggi: Fashion-ology”: 2,865 dresses, 265 pair of shoes, 932 hats, 24 aprons, 31 fur and feathers boas, marking her legacy of state-of-the-art fashion.

The muse of fashion designers like Vivienne Westwood, Manolo Blahnik, Stella McCartney and Lagerfeld, who sketched her outfits in his 1986 “Anna-chronique”, drawing the veteran editor and her blue streak wearing designs from Poiret, Galliano, Chloé, Chanel, Piaggi died 7 August at 81, leaving a blank spot on the pages of the Italian Vogue.

Bill Cunningham called her a “very fine poet” and Donatella Versace told American Vogue, “she was a visionary with a heart of gold. The world is a little less colourful without her.”

If you are what you wear, Piaggi was a rainbow, an encyclopedia of styles with a million pieces of fashion brought together in a patchwork, with freedom, sincerity and an irresistible sense of humour. An eccentric, maybe, but in bright colours and bold statements; something that made her truly unforgettable. DM