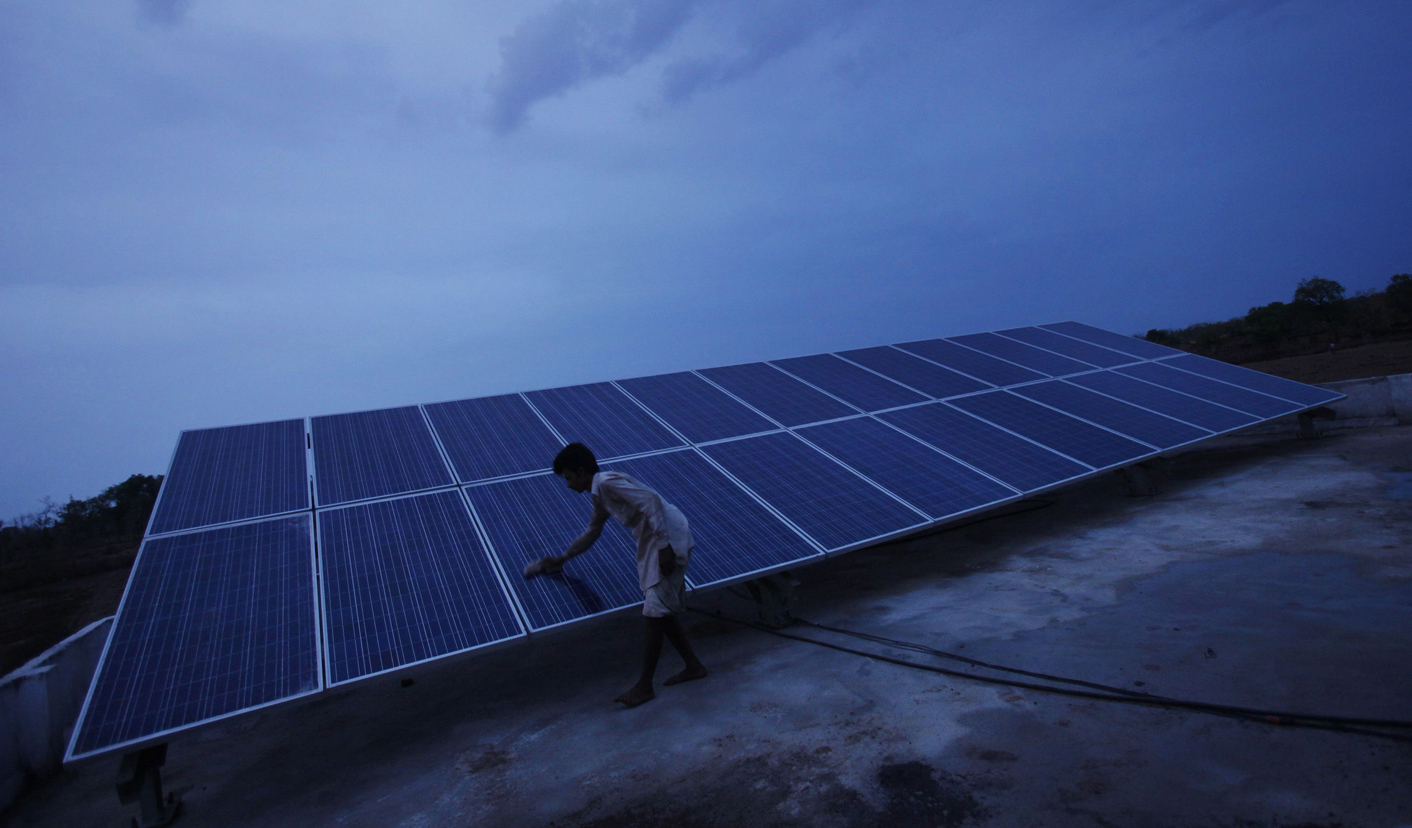 Life in the remote Indian village of Meerwada used to grind to a standstill as darkness descended. Workers downed tools, kids strained to see their schoolbooks under the faint glow of aged kerosene lamps and adults struggled to carry out the most basic of household chores. By Jo Winterbottom.

The arrival of solar power last year has changed all that. On a humid evening, fans whirr, children sit cross-legged to study their Hindi and mother-of-seven Sunderbai is delighted people can actually see what they are eating and drinking.

“When it was dark, we used to drink water with insects in, but now we can see insects, so we filter it and then drink,” said the 30-year-old, whose flame-orange sari and gold nose ring are small defiances in a life close to the poverty line.

Meerwada, on a dirt track rutted by rains and outside the reach of the national grid, struck lucky when U.S. solar firm SunEdison picked it to test out business models and covered the hefty initial expense of installing hi-tech solar panels in the heart of the village.

But rapidly falling costs and improved access to financing for would-be customers could encourage the spread of such systems down the line, while simpler solar schemes are already making profits in areas where the grid either does not extend or provides only patchy power.

And Asia’s third-largest economy, where just this week hundreds of millions were left without electricity in one of the world’s worst blackouts, needs all the help it can get in easing the strain on its overburdened power infrastructure.

The country’s Ministry of New and Renewable Energy (MNRE) hopes solar systems that bypass the national grid will account for just under one percent of total installed capacity by 2022. Still a mere flicker, but that 4,000-megawatt (MW) goal would be way up from 80 MW now when so-called off-grid solar systems are still out of reach for most of the country’s rural poor.

Large-scale solar facilities that directly feed the grid, such as those at an over 600 MW solar park recently launched with great fanfare in Gujarat, have been gaining traction for some time.

But potential growth in off-grid solar power offers a ray of hope to the around 40 percent of India’s 1.2 billion population that the renewable power ministry estimates lack access to energy. People like those in the village just 200 metres away from Meerwada, who rely on a hand pump for water and cook by torchlight as hungry goats creep up on them out of the gloom.

Covering initial investment on solar is key as, in a country with around 300 days of sunshine a year, subsequent costs are largely limited to maintenance and repairs.

“Although diesel is more expensive on a full-cost basis, you defer cash outlay for the fuel … the cash outlays are different and that’s one of the key challenges.”

Small-scale direct current (DC) systems from Karnataka in the south to Assam in the north-east have already cleared that hurdle, supplying simple lights and mobile phone chargers at 100-200 rupees ($1.80-$3.60) per month per light — prices that typically allow installers to cover their initial costs in time.

Private company Mera Gao Power fits roof-top solar panels and then transmission to other houses who pay about 40 rupees to connect, with costs thereafter about 25 rupees per week, said Nikhil Jaisinghani, one of the firm’s founders. That means it should currently take about 12 months to repay panel installation expenses of about $2,500 for 100 houses, though the cost is set to fall.

Initial expenses are far more onerous on more comprehensive mini-grids like the one in Meerwada, which includes a room full of batteries that can store enough electricity to provide round-the-clock supply to the village and which has recently started powering water pumps.

California-based SunEdison reckons it cost $100,000-$125,000 to build the 14 kilowatt (KW) plant in Meerwada, an expense that would have demanded fees way too high for the 400 or so villagers, whose per capita income is about $250 a year.

The firm expects initial capital costs to come down enough to make alternating current (AC) systems affordable in villages like Meerwada in a few years, with improving technology and fierce competition reducing hardware costs, while enhanced battery storage driven by the auto industry’s push on electric cars is also helping.

SunEdison, which sells solar power plants and services worldwide to commercial, government and utility customers, has over 50 MW of interconnected solar electricity in India, with projects ranging from small rooftop installations to part of the Gujarat solar park.

“Three years ago, the panel price was $2.60 per watt. Today it is 75 cents a watt. I don’t think it will halve in the next few years but I clearly see 50 cents a watt by 2014/15,” said Ahmad Chatila, president and chief executive of MEMC Electronic , SunEdison’s parent company.

In the meantime, the government is offering 30 percent of the project cost and in some cases low-interest loans for solar power systems under its Jawaharlal Nehru National Solar Mission policy launched in 2010.

But that still means systems are beyond the reach of many poor, rural customers, so some solar companies are putting up the 20 percent deposits on loans required by banks or acting as guarantors for customers who are outside the conventional banking system.

KEEP ON THE SUNNY SIDE

Back in Meerwada, which lies in central India’s Madhya Pradesh, the villagers have added an unexpected ingredient to the cost equation — frugality. Lights even now are turned on only when darkness falls and fans target the youngest children and the elderly, saving on power use.

Only the village leader, Sampat Bai, has been able to afford a television but it’s open to all and her bare-walled main room is crowded when the latest epic dramas come on screen and the children have finished their homework.

Manorbai, a 30-something mother who is now making more money by working at night to mend and sew on her vintage black-and-gold foot-pedal sewing machine, has a simple message on the future.

“Our village has power and other villages should too,” she said. DM