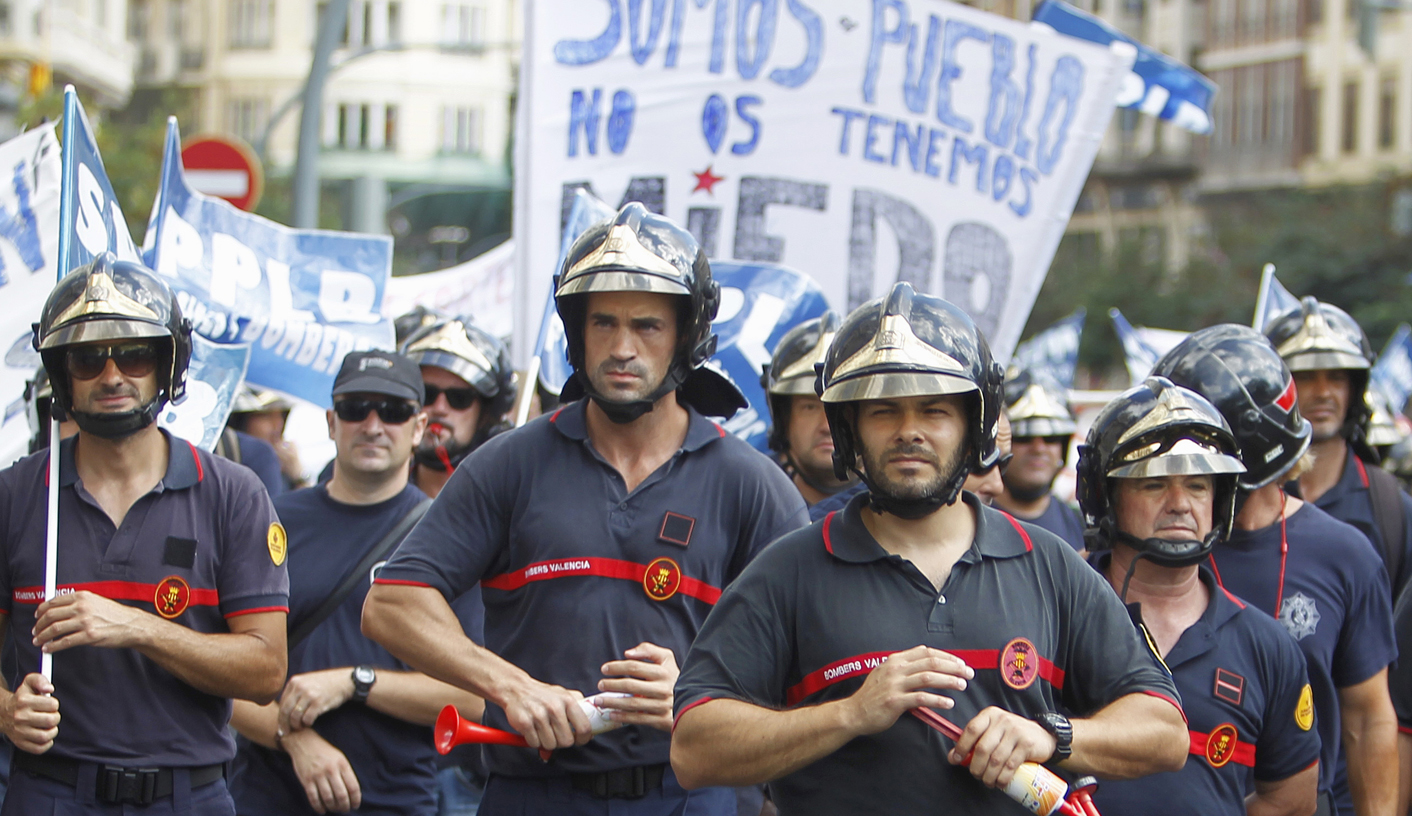 Bleak news on confidence and growth underlined the parlous state of Europe's economy on Monday, triggering a sharp fall in share prices and a spike in Spanish bond yields as investors fretted anew about the future of the euro. By Alan Wheatley, Global Economics Correspondent.

The single currency slid to a two-year low against the dollar and a near 12-year trough against the yen after surveys showed the troubles of the 17-nation currency bloc are making consumers even more wary than economists had expected.

Spain, in the eye of the debt and banking storm, sank deeper into recession in the second quarter as gross domestic product contracted by 0.4 percent after a 0.3 percent drop in the January-March period.

Adding to Madrid’s woes, media reports suggested another half a dozen of Spain’s 17 regional authorities, facing an undeclared funding crisis, were ready to follow Valencia in seeking aid from the central government.

Spain has already won the promise of 100 billion euros ($121 billion) from its euro zone partners to shore up its banks.

But investors are increasingly concerned that Europe’s fourth-largest economy, like Greece, Ireland and Portugal before it, will have to ask international lenders for a full rescue.

“What began as a Spanish banking bailout looks to be moving rather quickly towards a possible sovereign bailout,” said Jeremy Stretch, a currency strategist at CIBC.

The global economy is taking a sustained battering from fears that the United States could fall off a fiscal cliff, a softening growth trend in China and, above all, the debilitating euro zone crisis.

“The euro zone is particularly vulnerable, as it is unclear how it could put together a (Spanish) rescue package quickly,” said Christian Schulz, an economist with Berenberg Bank.

Investors stampeded out of Spanish bonds, whose yields soared to a euro-era high above 7.5 percent, while equities suffered sharp falls as confidence crumbled.

Financial markets are braced for more evidence of the damage to the euro zone economy on Tuesday. July’s advance surveys of purchasing managers are expected to produce readings well beneath the boom-bust mark of 50, signaling recession. At best, the reports will show both manufacturing and services are at least stabilising.

Two other important early glimpses of how the third quarter is shaping up, Germany’s IFO business climate and Belgium’s leading indicator, are scheduled for Wednesday and are forecast to show a modest deterioration.

“Risks to the economic outlook and to the euro zone sovereign situation are stacked on the downside, and we see a significant probability of a rate cut by the ECB within the next three months,” said Riccardo Barbieri, chief European economist at Mizuho in London.

The drag from Europe will help peg second-quarter U.S. gross domestic product growth back to a ho-hum 1.4 percent from 1.9 percent in the first three months of the year, economists believe. The data will be released on Friday. [ECI/US}

Britain, which has the euro zone as its main trading partner, is doing much worse. Figures on Wednesday are projected to show that the economy shrank by 0.2 percent in the April-June period. That would be the third straight quarter of contraction.

The International Monetary Fund, in cutting its forecasts last week for the global and euro zone economies, lambasted policymakers for dithering.

In unusually direct language, the fund demanded an “unequivocal commitment” to the euro from member governments and urged the European Central Bank to conduct “sizeable” purchases of sovereign bonds to tackle the region’s troubles.

Beijing, its economy growing at the slowest rate in three years, has also been pressing for decisive action. Europe is China’s biggest export market.

Tao Wang, an economist for UBS in Hong Kong, said a drop in external demand due to the euro’s malaise was one of the two main risks (the other is a further fall in the property market) to her forecast of an investment-led recovery in Chinese growth over the rest of 2012.

To that end, investors will be scrutinising the export orders component of HSBC’s flash survey of Chinese purchasing managers for July, due on Tuesday.

Poor figures from Europe would add fuel to the debate over whether governments should give themselves more time to reduce their swollen debts and deficits.

The euro zone, in fact, has already done just that for Spain, and the IMF last week advised Britain to scale back its fiscal tightening plans if growth does not pick up by early next year.

Richard Koo, chief economist of the Nomura Research Institute in Tokyo, said Britain, along with Germany, Japan and the United States, was benefiting from funds fleeing troubled euro zone counties.

With their bond yields at extremely low levels as a result, these countries should borrow and spend to support aggregate demand, Koo argued. The first three of the quartet, however, apparently have no interest in administering fiscal stimulus.

“The U.S. stands alone in this regard, although all we have for now is the president’s proposal to extend existing tax cuts. That will not be nearly enough to support the global economy,” he said.

But given the severity of the West’s debt crunch, perhaps there is simply no way to provide enough support and growth will remain sluggish for years while excessive borrowing is paid back?

After all, that would be the conclusion to be drawn from the landmark 2009 study of financial crises by U.S. economists Ken Rogoff and Carmen Reinhart.

Given the massive shock emanating from stresses in the sovereign debt markets, the relative performance of the euro zone will probably deteriorate from now on, Gros said.

Governments are nevertheless right to pursue austerity to pay down debt, even at the temporary cost of lost jobs and output, because without retrenchment public debt ratios would become unsustainable, Gros said in an article for VoxEU.org.

“The fact that austerity has costs does not imply it should never be undertaken,” he wrote. DM

Photo: Firefighters march during a protest by firefighters and police officers against government austerity measures in Valencia July 23, 2012. Placard reads, “We are the people, we are not afraid of you”. REUTERS/Heino Kalis

Vincent Lali for GroundUp • 35 mins ago