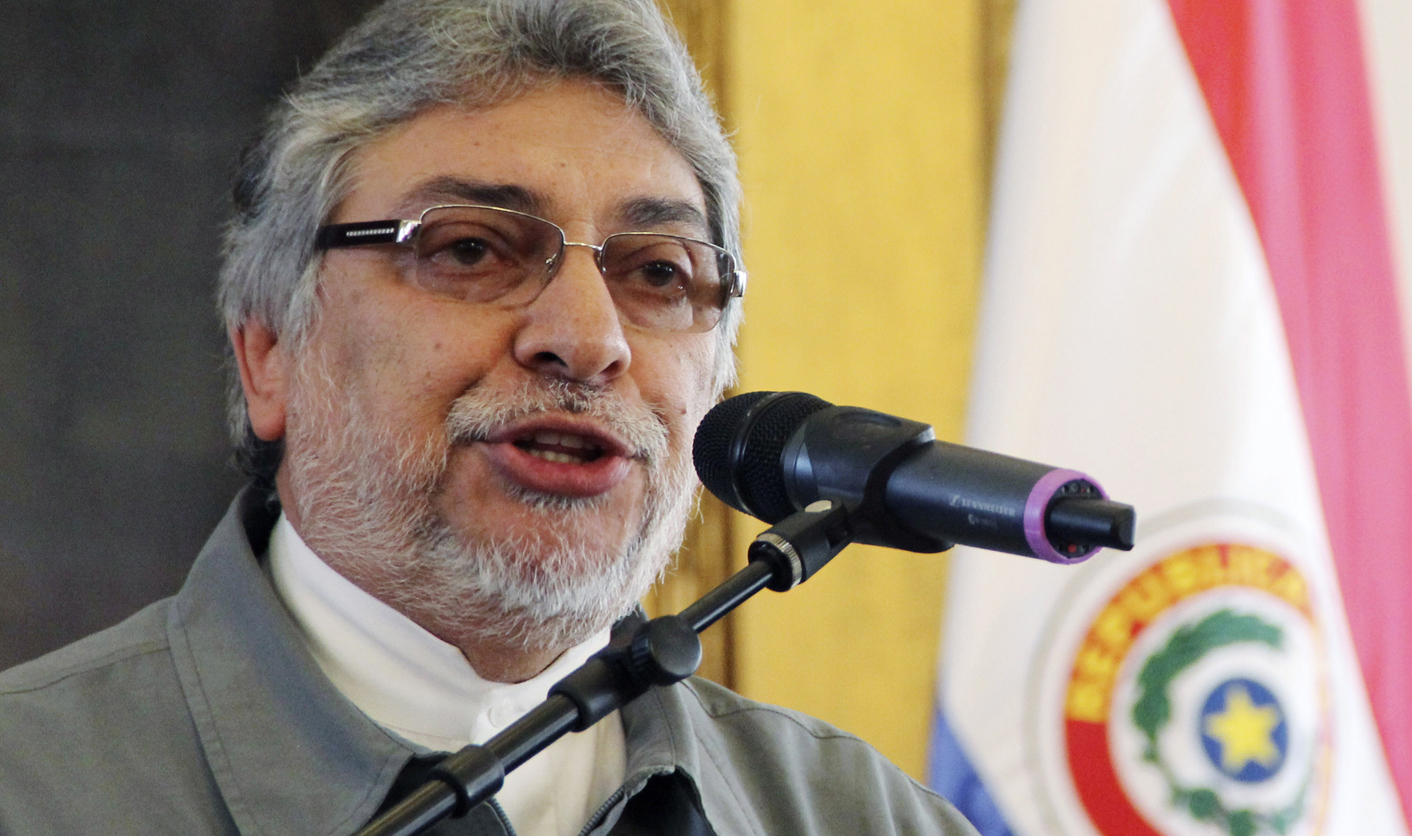 Ousted Paraguayan President Fernando Lugo branded the country's new government illegitimate on Sunday and called for democracy to be restored as neighboring countries intensified criticism of his sudden impeachment. By Daniela Desantis and Guido Nejamkis

Lugo, a leftist former Roman Catholic bishop, said his removal from office was “a parliamentary coup against the will of the people” and said he would back any peaceful effort to restore democracy in the soy-exporting South American nation.

Congress voted overwhelmingly on Friday to remove Lugo from office, saying he had failed in his duty to maintain social order following a bloody land eviction.

Under the Paraguayan constitution, the impeached president was replaced by Vice President Federico Franco, a vocal critic of Lugo for much of his presidency.

Franco’s newly appointed foreign minister urged Lugo to help quell the regional tensions, saying it was his “duty as a Paraguayan citizen and former president.”

But Lugo refused to help his successor.

“We support any kind of peaceful effort aimed at restoring institutional order that was interrupted by Parliament,” he told reporters.

“This is a fake government. You can’t collaborate with a government that doesn’t have legitimacy,” he said, adding that he would attend a summit of the regional trade bloc Mercosur later this week to explain the situation.

Argentina, which currently holds Mercosur’s rotating presidency, said Franco’s government would not be allowed to attend the meeting.

In a region scarred by military coups and political upheaval in the 1970s and 1980s, the rapid nature of Lugo’s impeachment by an opposition-controlled Congress has drawn strong criticism – especially from fellow leftists.

A senior Brazilian official said Paraguay would likely be suspended from the regional UNASUR grouping and from Mercosur, which also includes Argentina, Brazil and Uruguay.

“The point is to make this new government a pariah,” the official said, speaking on condition of anonymity.

Regional powerhouse Brazil has recalled its top diplomat for consultations and the ambassador is unlikely to return while Franco remains in the presidency, the official added.

“We don’t recognize this government. I’ve ordered the ambassador in Asuncion to pack his things and leave,” Chavez said in a speech. “We’re going to stop sending oil too.”

Venezuela’s state oil company PDVSA supplies about a quarter of Paraguay’s oil needs under a deal that lets countries buy crude on soft financing terms and even pay in farm goods.

Paraguay’s state oil firm said supplies were not at risk, however, due to ample stocks and alternative providers.

Nations including Canada, Spain and Germany recognized the new government after Lugo said on Friday he would accept the congressional vote to remove him. Others, including Chile and Colombia on Sunday, have summoned ambassadors for a briefing.

Despite the chorus of international criticism, Paraguay’s low-key riverside capital was calm on Sunday. Fewer police were patrolling the streets than in recent days and restaurants and businesses were open as usual.

“Lugo was useless but what happened in Congress was a joke – it was like pigs talking about hygiene,” said Benjamin Aguayo, 18, in downtown Asuncion.

A small group of Lugo supporters gathered outside the state TV studios to demonstrate in favor of his return to office.

Lugo’s impeachment was sparked by clashes that killed six police and 11 peasant farmers during a recent land eviction. He was one year away from completing his five-year term.

Paraguay is one of the poorest countries in South America and Lugo, 61, vowed to improve the quality of life of low-income families when his election ended six decades of rule by the conservative Colorado party.

But he struggled to push reforms, including land redistribution to poor peasant farmers, through Congress. A cancer scare and several paternity scandals dating back to his time as a bishop added to his difficulties.

When his allies from the Liberal Party withdrew support for him on Thursday, they cleared the way for the impeachment trial.

In contrast to Lugo, Franco has solid backing among ranchers and farmers in the world’s No. 4 soybean exporter.

“The agricultural industry is going to be a priority, no question about it, because it’s vital for Paraguay” said Liberal lawmaker Gustavo Cardozo. DM