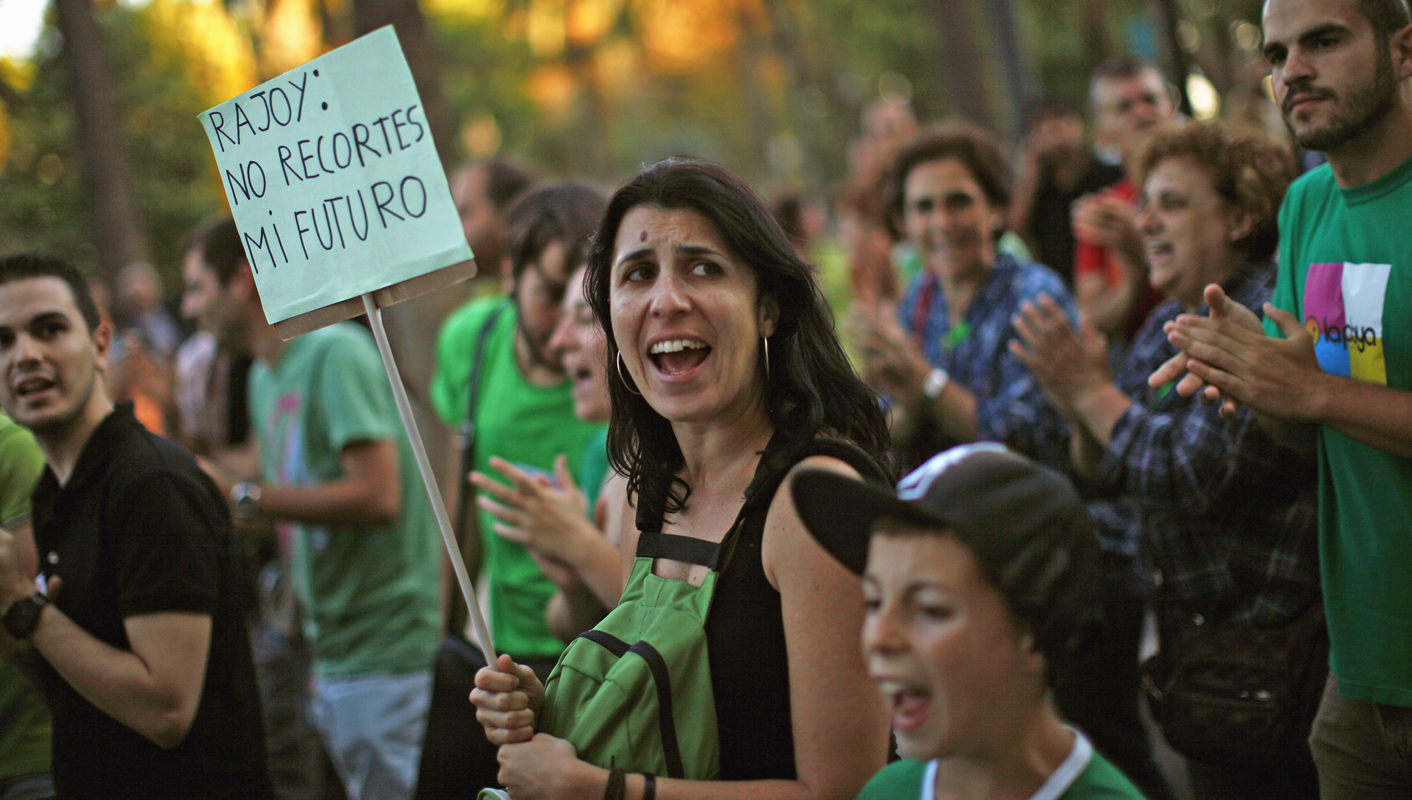 Spanish 10-year borrowing costs neared the 7 percent danger level and Bankia shares hit record lows on Monday after the government, struggling to sort out its finances, proposed putting sovereign debt into the struggling lender. By Julien Toyer and Sarah White

Prime Minister Mariano Rajoy pinned the blame for the rising borrowing costs – the spread over Germany reached the highest since the euro’s launch – on concern about the future of the single currency. He again ruled out seeking outside aid to revive a banking sector laid low by a property boom that has long since bust.

“There are major doubts over the euro zone and that makes the risk premium for some countries very high. That’s why it would be a very good idea to deliver a clear message there’s no going back for the euro,” Rajoy told a news conference.

“There will not be any (European) rescue for the Spanish banking system.”

He gave no details of bank recapitalisation plans but backed calls for the euro zone bailout fund, which will be in place from July, to be able to lend to banks direct.

Government sources told Reuters Spain may shore up Bankia with sovereign bonds in return for shares in the bank and could use this method to prop up other troubled lenders – moves which would push the country’s debts above the 79.8 percent of economic output which had been expected this year.

“This method has been used by Germany and by Ireland in the past, it is perfectly valid,” a government source told Reuters.

The source said the ECB had not been specifically informed of the plans to inject state bonds into Bankia. A final decision had not yet been made on which option to take.

Bankia’s parent company BFA has asked for 19 billion euros ($23.8 billion) in government help, in addition to 4.5 billion the state has already pumped in to cover possible losses on repossessed property, loans and investments.

Investors increasingly believe weak banks, undermined by the collapse four years ago of a decade-long property boom, coupled with heavily indebted regions, could force Spain to seek an international bailout which the euro zone can barely afford.

The premium investors require to hold Spanish government bonds over German counterparts hit a euro-era high at 505 basis points, denoting a lack of confidence in Madrid’s efforts to stabilise its finances and ailing banks.

Having dropped to around 4.7 percent earlier this year, helped by the ECB’s creation of a glut of three-year money, 10-year borrowing costs are now approaching 6.5 percent and closing in on the 7 percent level widely seen as unsustainable.

Ireland and Portugal were frozen out of capital markets and forced to seek international bailouts soon after their yields topped 7 percent.

“If it goes on for much longer, it just adds to the burden of fiscal consolidation,” said Elisabeth Afseth, analyst at Investec in London. “If a large part of that is spent on paying a premium to borrow, it just makes it so much harder.”

Spain’s trump card is that it has issued well over half the debt it needs to this year, in the first five months.

But that advantage is being eroded.

A plan to recapitalise Bankia with Spanish government bonds, which the bank could then use as collateral to get cash from the ECB, could add to the government’s refinancing problems.

Spain’s Treasury insisted it would repay debt maturing without problems.

“We are in a very strong position (to meet debt maturing shortly),” said Ignacio Fernandez Palomero, deputy director of public debt at the Treasury, pointing to redemptions in July and October, when Spain has big amounts due.

Spain’s central government and regions need to refinance 117.5 billion euros of debt by the end of the year, while funding a deficit worth 52 billion euros.

It has already shifted more than 55 percent of its debt issuance for the year but about half of the remaining debt maturing in 2012 will have to be repaid in the last three months of the year, making it imperative borrowing costs have been brought down by then.

THUMBS DOWN FROM MARKETS

“The figures are much higher than any other release from any other bank,” a financial source with direct knowledge of the bank’s situation told Reuters.

Despite the 23.5 billion euros rescue cued up for Bankia, its shares tumbled by about 13 percent, pressuring some weaker peers. Its drastic hike in provisions to cover potential losses from repossessed property and souring consumer debt has raised the prospects that other banks may need to do the same.

A wider audit of Spain’s banking system should reveal by June what capital gap other banks will need to fill.

“The events at Bankia will reinforce the view that the upcoming external review should identify a significant recapitalisation need for the Spanish banking system,” analysts at Nomura said in a note, putting a recapitalisation of the whole sector at between 50 and 60 billion euros, with the main listed banks requiring an additional 16 billion euros.

Nomura said only BBVA, Santander and Sabadell would not need to strengthen their capital, while the government would need to clean up smaller lenders it has already propped up, such as Banco de Valencia, Novacaixagalicia and Catalunya Caixa.

“Given the current economic and political uncertainties facing the euro zone, this could see additional pressure on Spain to consider using external funds for the bank recapitalisation,” Nomura said. DM

Photo: People march during a general students and teachers’ strike against educational cuts imposed by the Spanish government, in downtown Malaga, southern Spain May 22, 2012. Spanish teachers went on strike on Tuesday to protest against cuts in education spending that labour unions say will put 100,000 substitute teachers out of work but that the government says are needed to tackle the euro zone debt crisis. The placard reads, “Rajoy: do not cut my future”. REUTERS/Jon Nazca