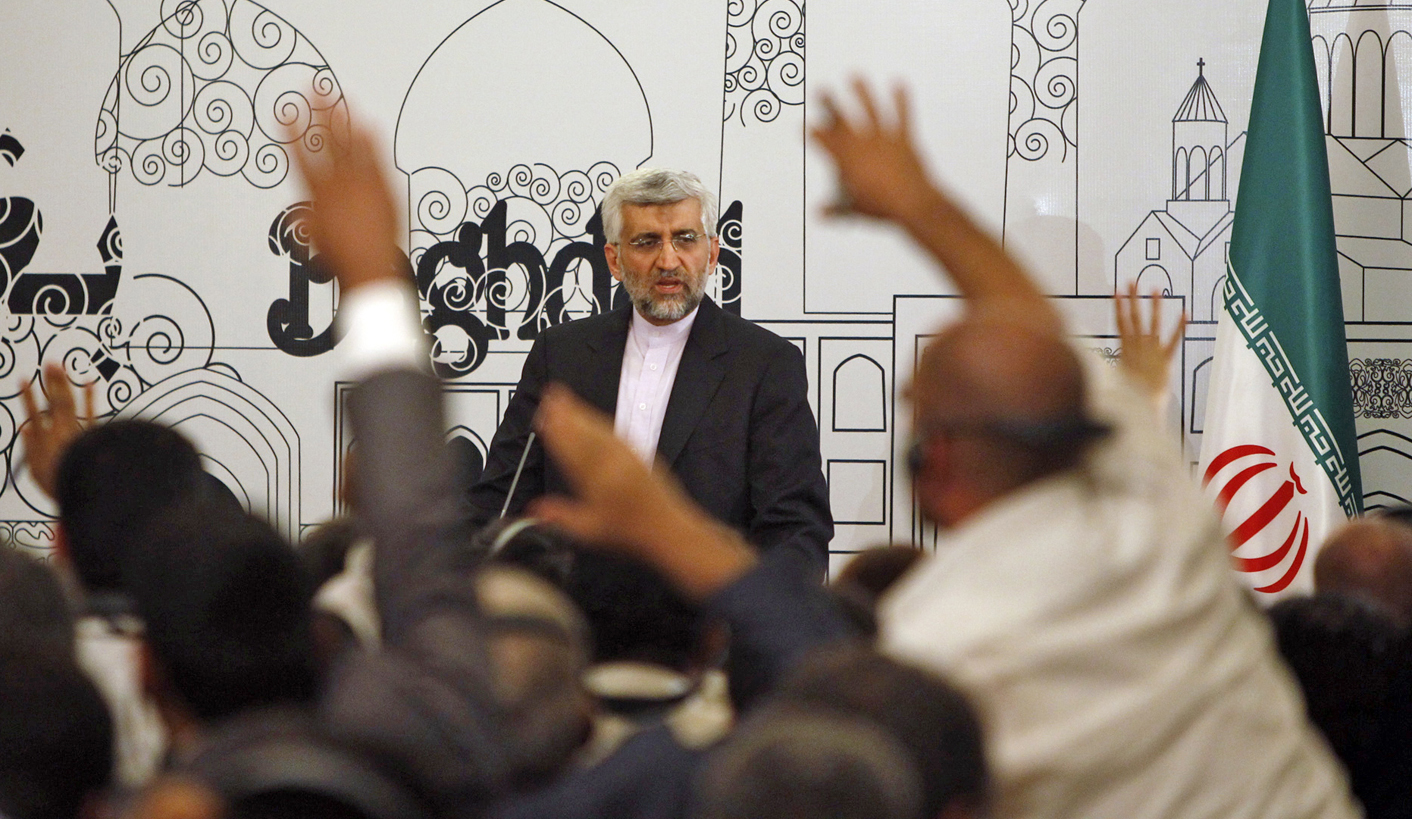 Iran and world powers agreed to meet again in Moscow next month for more talks to try to end the long-running dispute over Tehran's nuclear programme, but there was scant progress to resolve the main sticking points between the two sides. By Andrew Quinn and Justyna Pawlak

At the heart of the dispute is Iran’s insistence that it has the right to enrich uranium and that economic sanctions should be lifted before it stops activities that could lead to its achieving the capability to make nuclear weapons.

Western powers insist Tehran must first shut down enrichment activities before sanctions can be eased.

But both sides have powerful reasons not to abandon diplomacy. The powers want to avert the danger of a new Middle East war raised by Israeli threats to bomb Iran, while Tehran also wants to avoid a looming Western ban on its oil exports.

After discussions in Baghdad extended late into an unscheduled second day on Thursday between envoys from Iran and the six powers, European Union foreign policy chief Catherine Ashton said it was clear both sides wanted progress and had some common ground, but significant differences remained.

“We will maintain intensive contacts with our Iranian counterparts to prepare a further meeting in Moscow,” she told a news conference in Baghdad.

The next meeting, the third in the latest round of talks that began in Istanbul last month, will be held in Moscow on June 18-19.

Ashton leads the negotiations for the six-country group made up of the five permanent members of the U.N. Security Council – Britain, China, France, Russia and the United States – which together with Germany is known as the P5+1.

“Talks were intensive and long,” said Iranian chief negotiator Saeed Jalili. “They were detailed, but are left unfinished.”

While there was little if any concrete progress, the fact that the two sides agreed to continue talks was a sign of progress in itself, after more than a year of not meeting at all before the latest round of negotiations began in April.

“The two sides’ commitment to diplomacy in the absence of any clear agreement is a positive sign,” said Ali Vaez, Iran expert at the International Crisis Group think-tank.

“Both sides entered negotiations with their maximalist positions, and neither budged,” he said. “Looking ahead, now the hard work begins.”

The six powers want practical steps from Iran to address their concerns over its nuclear work.

Chief among such concerns is Iran’s ability to enrich uranium to a fissile purity of 20 percent. That is the nuclear advance most worrying to the West since it opens the way to reaching 90 percent, or bomb-grade, enrichment.

“Iran declared its readiness to address the issue of 20 percent enrichment and came with its own five point plan, including their assertion that we recognise their right to enrichment,” Ashton said.

IRAN INSISTS ON ITS RIGHTS

Iran says it will not exceed 20 percent and the material will be made into fuel for a research reactor.

Iran has hinted at flexibility on higher-grade enrichment but Iranian media said it would not give away its most potent bargaining chip without significant concessions on sanctions.

“We never expected to get that agreement (on 20 percent) here in Baghdad,” said a senior U.S. administration official who declined to be identified due to the sensitivity of the subject.

But, he said “there is agreement to address all aspects of 20 percent as we put it on the table”.

A significant difference between the two sides is Iran’s insistence on what Jalili called “an undeniable right of the Iranian nation” to enrich uranium.

“Obviously (that) was not something we were prepared to do,” the official said, echoing the U.S. view that Iran does not automatically have this right under international law because, it argues, Iran is in violation of its obligations under counter-proliferation safeguards.

The United States and its allies suspect Tehran is trying to develop a nuclear weapons capability and have imposed tough sanctions on Iran’s energy and financial sectors to try to force it to compromise and open up its activities to scrutiny.

EU states are set to introduce a total embargo of Iranian crude oil purchases in July. Diplomats say that potentially persuasive measure will not be cancelled unless Tehran takes substantial steps to curb its nuclear activities.

U.S. Secretary of State Hillary Clinton said there would be no let up in sanctions against Iran, even as talks continue.

“As we lay the groundwork for these talks, we will keep up the pressure as part of our dual-track approach,” she told reporters in Washington hours after the talks ended in Baghdad. “All of our sanctions will remain in place and continue to move forward during this period.”

The senior U.S. official said the six powers were going to try to advance the talks “as fast as we can”. But it was too early to talk about technical level or expert meetings because the political issues still needed to be clarified.

The official said sanctions coming into effect in coming weeks would increase leverage on Iran in the negotiations.

“Maximum pressure is not yet being felt by Iran,” the official said, adding there were many other potential sanctions that remained to be employed.

The powers want Iran to send its more highly refined uranium abroad and close an underground plant devoted to 20 percent enrichment which is largely invulnerable to air strikes.

In return, the United States, Russia, China, France, Britain and Germany have offered fuel to keep Iran’s medical isotope reactor running, assistance in nuclear safety and an end to an embargo on spare parts for Iran’s ageing civilian aircraft.

Rising tension over the past year has pushed global oil prices upwards as the West has broadened sanctions to bar Iran’s crude exports and the spectre of Middle East war has increased with the threat of possible Israeli strikes on Iran’s nuclear installations.

Israel is believed to be the only Middle East country with nuclear weapons but regards Iran’s nuclear aspirations as a mortal threat given its calls for the demise of the Jewish state.

Iran, the world’s No. 5 oil exporter, says it is enriching uranium only in order to generate electricity to serve the needs of a burgeoning population, and for a medical research reactor.

The Islamic Republic has repeatedly ruled out suspending all enrichment as called for by several U.N. Security Council resolutions, saying nuclear energy is a matter of national sovereignty and pride in technological progress.

Photo: Iran’s chief negotiator Saeed Jalili addresses a news conference after a meeting in Baghdad, May 24, 2012. Iran and world powers agreed to meet again in Moscow next month for more talks to try to end the long-running dispute over Tehran’s nuclear programme, but there was scant progress to resolve the main sticking points between the two sides. REUTERS/Thaier al-Sudani