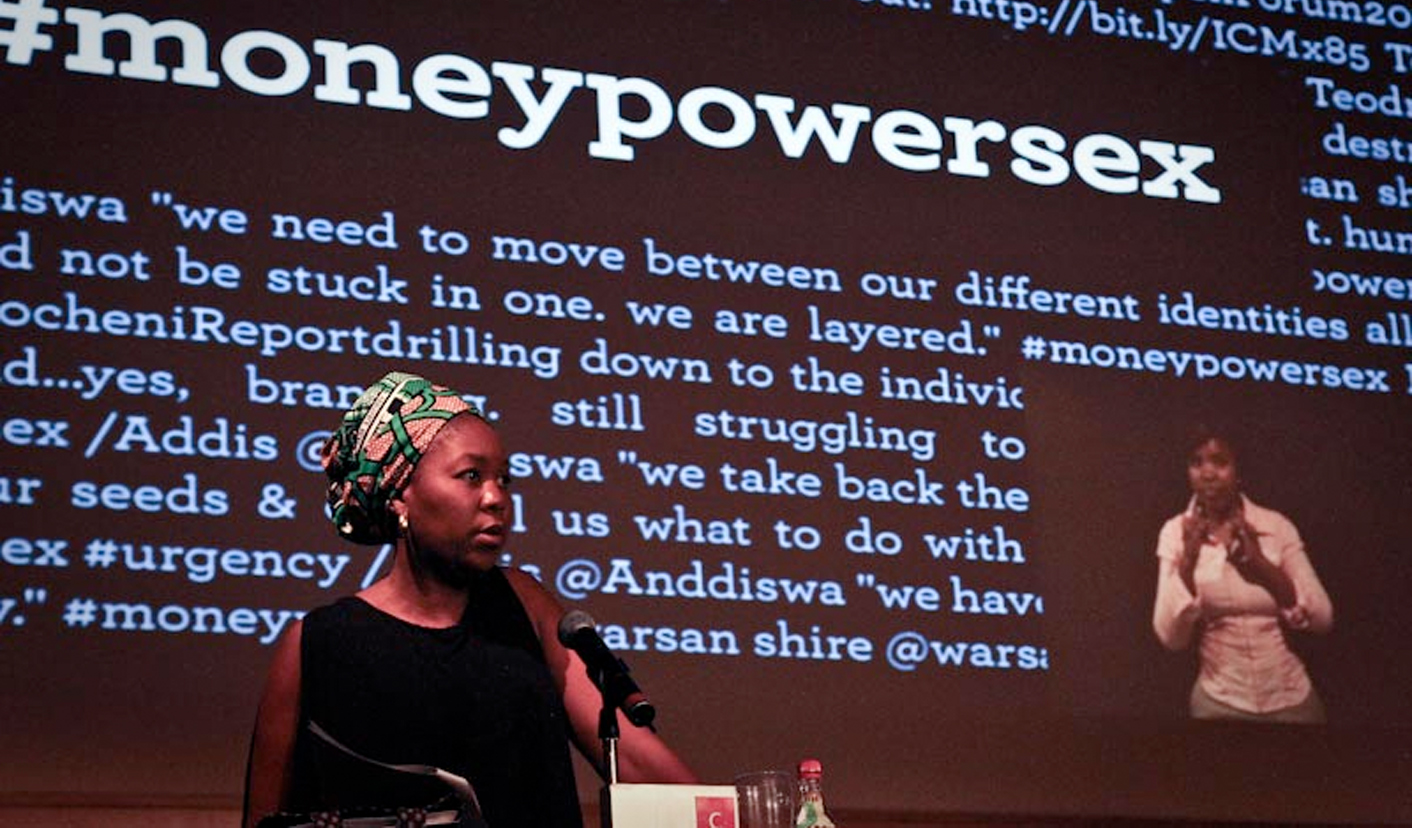 Is there anything that African artists agree on? At a sometimes fractious panel discussion convened as part of the Open Society’s 'Money, Power & Sex' conference on Wednesday, it was hard to discern any common ground shared by some of the continent’s prominent cultural figures.

When you get six of Africa’s most outspoken artists and activists around a table for a discussion, you can be sure of entertaining results. This certainly proved true at Wednesday’s Open Forum session, titled “A New Generation of African Artists and Activists Talk Politics”, even if it also revealed fairly deep fractures within ideas relating to African languages and identity.

Kenya’s Wainaina is a well-known iconoclast, famed for a satirical 2005 essay in Granta entitled How to Write About Africa, which tore into the stereotyped Western tropes of the continent: “Never have a picture of a well-adjusted African on the cover of your book, or in it, unless that African has won the Nobel Prize. An AK-47, prominent ribs, naked breasts: use these.”

In 2007 he declined the award of Young Global Leader from the World Economic Forum, explaining that, though he assumed that “most, like me, are tempted to go anyway because we will get to be ‘validated’ and glow with the kind of self-congratulation that can only be bestowed by very globally visible and significant people”, he valued his independence more highly.

Zimbabwe’s Petina Gappah, on the other hand, is the darling of the establishment. Her first book, An Elegy for Easterly (2009), won the Guardian First Book Award and was shortlisted for other prestigious accolades. The Guardian has described her as “in control of what promises to be a significant literary career”.

On the music side, Nigeria’s Femi Kuti, once termed “the most popular African musician of his generation” – though he has never quite achieved the iconic status of his father, Fela – shared the stage with South Africa’s Simphiwe Dana. Aside from her soulful music in her own language, Xhosa, Dana’s high-profile Twitter spats with Helen Zille have been news recently. But she has also become something of a language-rights advocate, having made a submission to Parliament on the importance of pupils receiving education in their home languages.

Throw in the fiery Bibi Bakare-Yusuf, publisher of Nigeria’s Cassava Republic Press, and you have all the ingredients for animated discussion. Bakare-Yusuf pulled no punches, kicking things off by quoting an anonymous African writer’s condemnation of contemporary African fiction as being boring, safe, and “waiting for approval from the headmistress”, in the form of literary prizes. The author? Binyavanga Wainaina, in a Facebook rant. Bakare-Yusuf’s question to the artists was straightforward: “Do you think you’re boring?”

Wainaina stuck to his guns in his view that mainstream fiction emanating from the continent these days is playing it too safe. “Late capitalism gives us well-behaved stories, but they lack a certain urgency.” Petina Gappah clearly suspected some of his criticism was directed at her, and pre-empted it by saying: “I’ve won a prize, so maybe I should give it back”. It was Gappah who climbed straight into one of the primary divides of the panel, however, by referencing the interview she gave to the Guardian in 2009 in which she said that she rejected the term “African writer”.

In the 2009 interview, she explained that her publisher had originally touted her as being “the voice of Zimbabwe”, before she insisted that this claim be excised from publicity material. She told the Guardian: “It’s very troubling to me because writing of a place is not the same as writing for a place… I get irritated by the term ‘African writer’ because it doesn’t mean anything to me. Africa is so big. There are some people who are happy to be African writers. They are pan-Africanists. I’m not a pan-Africanist. I think African countries have a lot in common. But we are also very different.”

It was predictable that this view might be unpopular at Open Forum, given the distinctly pan-African ideology that has characterised proceedings thus far. But Gappah wasn’t backing down: “I am tired of that conversation,” she told the panel. “Yes, I am proud to be African, but I want to be treated as an individual.”

Dana and Kuti were adamant that this perspective was a cop-out. “Until this continent is back on its feet, we have to do things for the continent. Our individual identities aren’t as important until Africa is free,” Dana said, to loud applause from the audience. Kuti advanced similar sentiments. “We owe a duty to our people, the continent, the crisis…We are at the forefront of explaining this bitter story to the average mind,” he said.

Kuti also said he wanted to see greater trans-continental mobility, like in the USA: “I need to be able to drive my car from Lagos to Johannesburg.”

Gappah conceded this point, saying that if the continent was to be truly pan-African, border crossings needed to be more efficient, an idea unlikely to find much traction in South Africa. She also called for a more streamlined continent-wide bureaucracy when it came to visiting other African countries, citing the absurdity of the fact that a Zimbabwean seeking to visit Senegal has to apply to the French embassy for a visa.

Where arguments about African identity flourish, the issue of language can’t be far behind – and so it proved. Wainaina opened this can of worms, saying that he wrote in English, because “English just so happened, for all the reasons we all know. I am keen to domesticate it.”

But indigenous languages are not going away, he said, and “we will not be free to produce or create until we live full lives in our own languages.” He pointed to the irony of the fact that it is the African elites – “we who have won scholarships” – who have continued to impose English on the continent, and “it hasn’t worked”.

Gappah took a pragmatic view: without English, she said, the panel would not be able to communicate. “I, as a Zimbabwean, am only able to talk to a Nigerian because we have this language in common.” This set the panel in uproar, with Kuti demanding to know how she thought Africans communicated before the arrival of English, and Dana turning away to mutter “I can’t believe we are having this conversation”.

“We are having this conversation in English, whether we like it or not,” Gappah insisted. But Kuti was equally adamant that “we must not accept anything colonial”, saying that the colonial influence on Africa had been wholly negative.

Dana steered the conversation back to language, saying she was less concerned with preserving local languages and more concerned with preserving her identity. “I’m not so hung up on language for language’s sake, but how language is a repository for identity.” Dana said that to preserve all languages was impossible, which is why a continental language was necessary. If English is that language, she said, “We have to admit defeat. It’s over. Then they have won. Because culture and identity are maintained in our languages.”

This preoccupation with an “authentic” African identity had an interesting counterpoint from a speaker at another session earlier in the day, the UN Development Programmes’s Brian Kagoro, who gave a barnstorming presentation on a panel that included ex-Mozambican president Joaquin Chicano and Dr Mamphela Ramphele.

“This suit is not African,” said Kagoro. “This microphone is not African. This room is not African. Nothing is African other than what we imagine.” It’s hard to see how that perspective would mesh smoothly with some rather essentialist views advanced by the artists’ panel.

Ultimately, the question of what constituted an “African identity” went unanswered. “To be African is to inhabit a set of contradictions,” said Gappah at one point. But as one social media commentator had it, isn’t that what it means to be human? DM