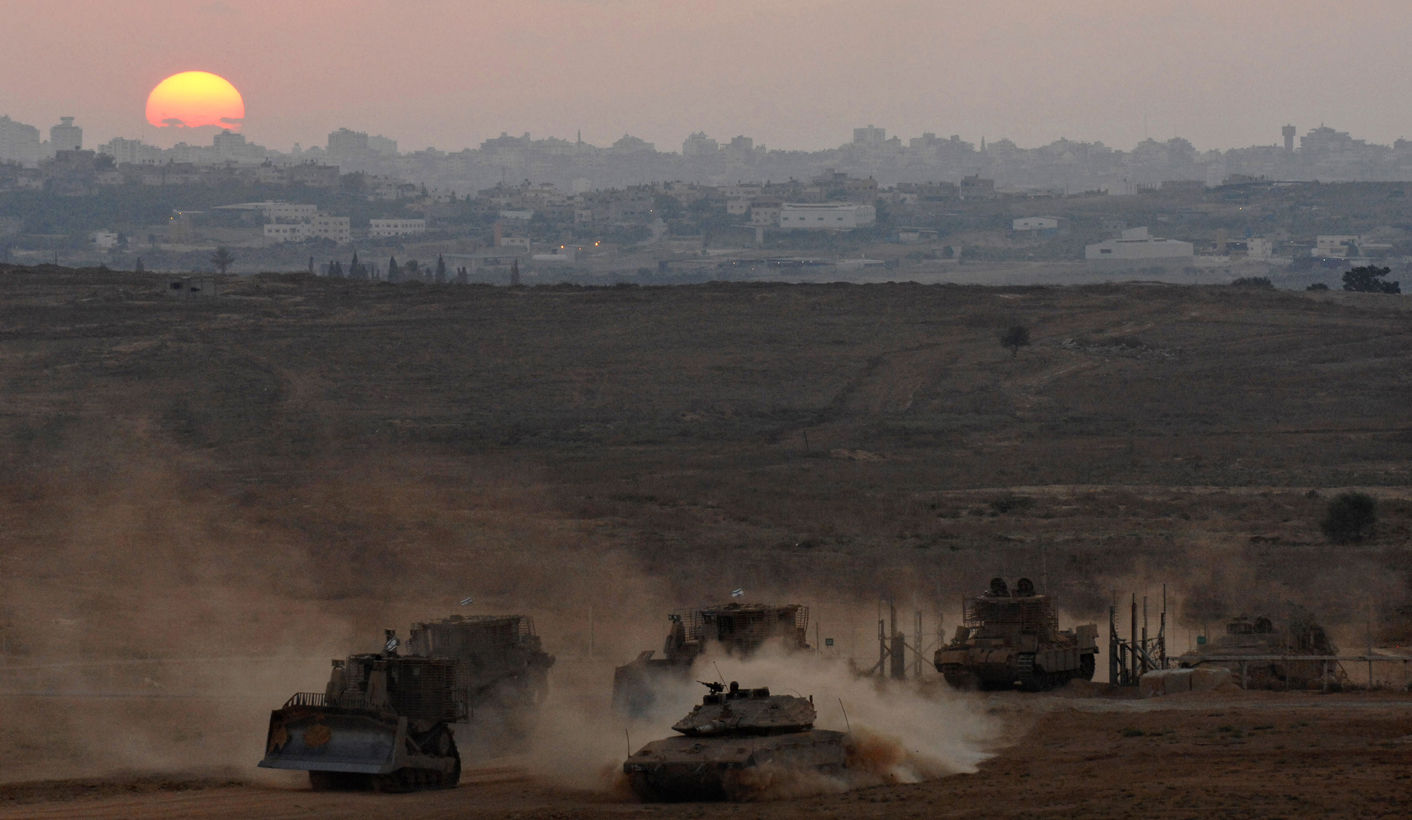 South Africa’s ambassador to Israel, Ismail Coovadia, is set to face the wrath of the Israeli government this week after the department of trade and industry announced that certain goods originating from Israel would have to be re-labelled to indicate they actually came from Occupied Palestinian Territories.

Salespeople peddling cosmetics have become a common sight in the passageways of shopping malls around Johannesburg. As pervasive as they are persistent, they stand ready to accost unassuming shoppers of a good few hundred rands for wondrous potions you never knew you needed.

On one such trip to Rosebank’s shrine to consumerism with a group of friends, the friendliest of my friends paused to listen to one salesman exuberantly extol the virtues of a hand lotion. As we stood by listening attentively, one friend reached for a box of lotion stacked on the makeshift counter, surveyed the small print and announced, “Made in Israel!”

It proved to be the opening salvo in a heated debate on what exactly a boycott of Israeli goods seeks to achieve. My friend, undaunted by the bulk of the salesman who had just completed a mandatory stint in the Israeli Defence Force, argued in favour of justice for Palestinians. The salesman rebutted with Israel’s right to do business as it pleased. After a good five minutes of the tit-for-tat politics exchanged in the alleyway of the mall, we prised our friend away. We had places to go and the salesman was immovable. We finally left him to persuade other shoppers to take home the bottled wonders of the Dead Sea.

Yet, the very labelling that so spectacularly raised the heckles of my friend also captured the attention of the South African government.

Last week, minister of trade and industry Rob Davies issued a notice in terms of Section 26 of the Consumer Protection Act to force traders of certain Israeli goods to re-label them. Instead of reading “Made in Israel” – or “Product of Israel” – the labels will now have to indicate their origin in the Occupied Palestinian Territory.

In terms of the Consumer Protection Act, the burden of proving where the products originate will lie with traders.

Davies’ notice actually specifies cosmetics from Ahava Dead Sea Laboratories as a product line that would need new labels if it is to continue being sold in South Africa. The Open Shuhada street.org (Open Shuhada), a lobbying group cited by Davies, has alleged that Ahava products, as well as Dead Sea cosmetics are being distributed in South Africa as products that originate in Israel when in fact they originate from the occupied territory.

The government of South Africa recognises the State of Israel only within the borders demarcated by the United Nations in 1948. Such demarcated borders of Israel by the UN do not include Palestinian Territories occupied after 1967. Ahava cosmetics are manufactured in Mitzpe Shalem, an illegal Israeli settlement located in the West Bank near the Dead Sea.

South Africa, however, is not unique in forcing its hand on products purported to originate from Israel. Since 2010, the European Union has required products made outside Israel’s 1967 borders to be marked as such. In 2008, the United Kingdom separately ordered labels on settlement products. And while the British ruling was a “recommendation” and not legally binding, it indicated companies that continue to use fraudulent labels could be criminally charged.

In South Africa, it is as yet unclear what fate may await traders who defy the department of trade and industry ruling. In the meantime, the Israeli government has been incensed.

Responding to Davies’ announcement, Israel’s foreign ministry has levelled accusations of racism against South Africa. “The singling out of one side of one conflict out of all the conflicts in the world is verging on racism,” an Israeli foreign ministry spokesperson said, adding that “this is sad, coming from South Africa, which should know better.”

Davies’ Israeli counterpart, minister of industry, trade and labour Shalom Simhon, meanwhile, has expressed concerns that South Africa’s efforts to enforce re-labelling of Israeli products may trigger a chain reaction. Speaking to the Globes website he said, “Exports of goods produced by Israeli enterprises beyond the Green Line are a negligible proportion of total Israeli exports.

However, I am deeply concerned of a chain reaction that will cause other countries to follow the South African initiative. At the moment, I believe that this is a single initiative.”

Israel’s deputy foreign minister, Danny Ayalon, also announced that his government would summon the South African ambassador to Israel, Ismail Coovadia, to protest the proposal. Department of international relations and co-operation spokesman Clayson Monyela confirmed that Coovadia had indeed been summoned by the Israeli government, adding: “The ambassador will attend the meeting, listen and discuss.”

The re-labelling action is part of a broader campaign from Palestinian solidarity activists around the world, calling for the boycotts, sanctions and divestments of Israel. Significantly, the BDS movement, as it is known, takes heart from the success of the boycott and sanctions levelled against apartheid South Africa to force pressure on the Israeli government.

Muhammad Desai, a representative of the BDS movement in South Africa, believes the requirement to re-label products purported to originate from Israel is only the beginning of achieving an effective economic boycott against Israeli goods.

“This must be seen together with the successes of the cultural and academic boycotts of Israel, which has already advanced quite a bit in South Africa,” he said.

Asked to define the aims of the BDS movement, Desai says: “It is a worldwide, non-violent movement aimed to pressure the Israeli state to enter into just negotiations with Palestinians. The movement began in 2005 – answering the call of Palestinians who had exhausted all other options to further their cause. They took great strength from the success of the boycott of the South African government in the apartheid era.”

Last year, arts and culture minister Paul Mashatile announced that South Africa would consider enforcing an official cultural boycott of Israel. President Jacob Zuma, when quizzed about government’s readiness to enforce a boycott of Israel during his foreign policy address at the University of Pretoria last year, stressed that the South African government would only take such a step in response to Palestinian requests for such measures, adding that ANC members in the struggle were particularly vociferous in calling for boycotts and sanctions.

The BDS movement has, however, not been without controversy even within the Palestinian solidarity circles. Academics Noam Chomsky and Norman Finkelstein have been two notable dissidents of the movement, and Finkelstein recently ruffled many feathers in stating his views against the campaign.

When I interviewed Finkelstein in 2009 during his speaking tour in South Africa, he stated he was cynical of the aims of an all-encompassing boycott against Israel but, particularly significant to South Africa’s recent moves, saw the benefit of boycotting goods originating in the settlements or indeed occupied Palestinian territories.

“But let’s say you want to make a campaign against a South African co-operation, which has investments in an Israeli co-operation and has no investment in the settlements… Well, under international law, Israel is a state – it is a legitimate state. I don’t think those kinds of sanctions can work. You have to stick with what the law says because then your arguments become much stronger with the public.

“I think Gandhi was very insightful – the object of politics is not to change public opinion, the object of politics is to get people to act on what they already know is wrong. That’s very different and Gandhi always focused on those targets on which he already knew concerns existed. If, as he put it, his aim was to quicken the conscience of people and get them to act on what they knew and then in our times the ‘conscience’ is international law, human rights and so forth.

Back in South Africa, while it may still be a while before we’re able to buy goods labelled as Palestinian, one thing is certain: the Israel-Palestine conflict will continue being the region’s best export. DM

Photo: An Israeli army convoy rolls into Israel from the Gaza Strip on the border with north Gaza near Kibutz Nir-Am after an army operation on September 15, 2007. REUTERS/Amir Cohen.