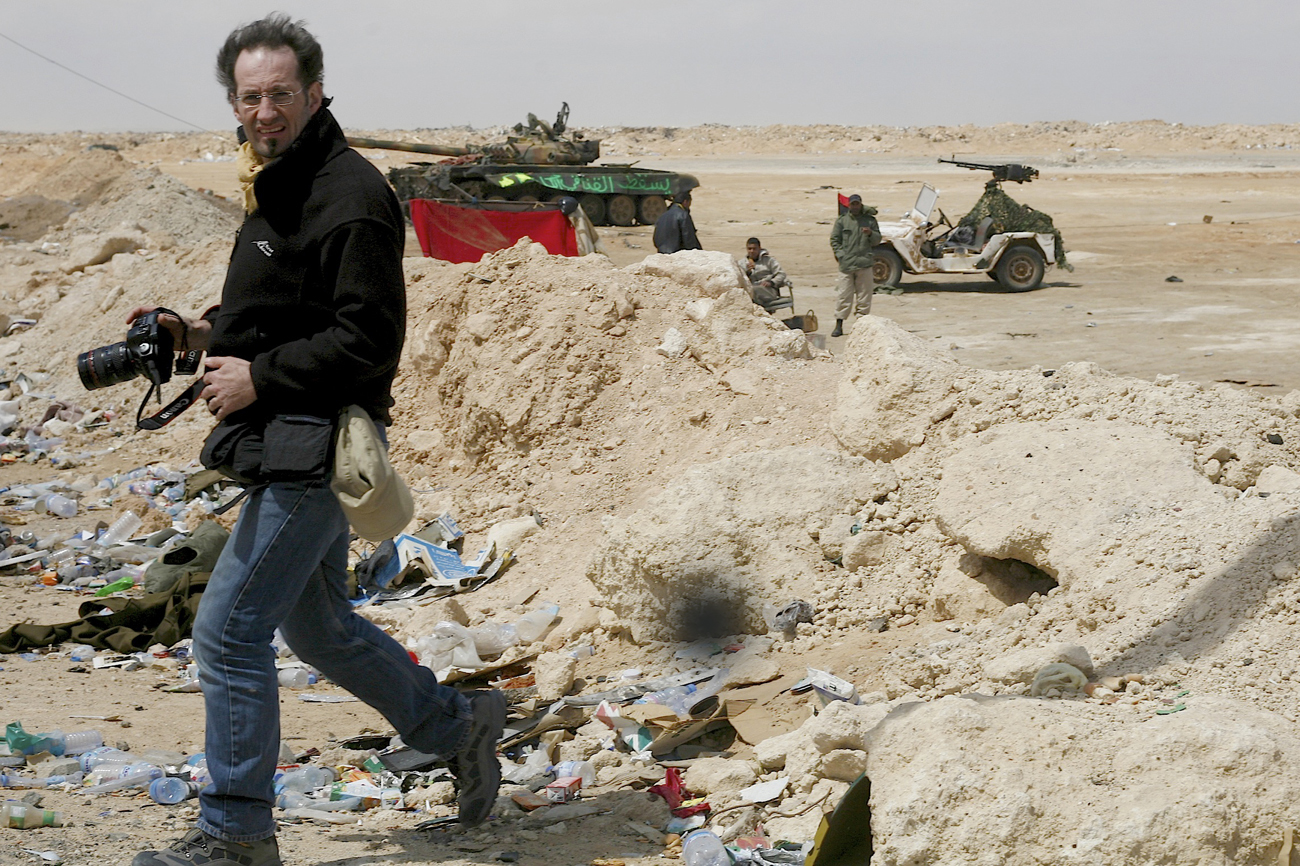 When South African photojournalist Anton Hammerl was killed in Libya last year, he left behind a wife and three small children. Some of the biggest names in photography came together last week to ensure his family would a future.

All journalism in combat zones carries risks. But few people would argue that being a freelance journalist in war situations is particularly precarious, because you lack the safety-net of a big media outlet. Journalist Claire Gillis, who was captured with Anton Hammerl by Gaddafi loyalists last year, said: “The vast majority of frontline news does come from freelancers, because no-one is telling us what to do. No-one is telling us when to stop. You can make a decent amount of money, but you have to balance that against having no insurance, having no accountability on the part of your news organisation.”

Gillis and Hammerl, with journalists James Foley and Manu Brabo, had travelled together to a remote corner of the Libyan desert, near the oil port of Brega, on 5 April last year. They wanted to document a night spent in a camp of anti-Gaddafi rebels. Leaving their car upon arrival, they witnessed the rebels with whom they had been travelling suddenly whipping around and retreating ahead of two armoured trucks carrying pro-Gaddafi troops at full speed, firing AK 47s.

James Foley explained afterwards the journalists had initially assumed they were caught in the crossfire. Then they realised they were the targets. All four journalists dropped and rolled, with Hammerl closest to the shooters. Hammerl began to cry out for help. Foley shouted asking if he was okay. The response came back: “No.”

Foley jumped up and pleaded with the troops not to shoot, yelling they were journalists. He, Brabo and Gillis were punched and kicked, before being tied up and thrown into a nearby truck. Hammerl may already have been dead by then. The others saw his body lying in the sand, his abdominal wound too severe to survive.

Foley, Brabo and Gillis were taken to a series of detention centres in Tripoli during the next six weeks. Throughout their captivity, the three agonised over how they would tell Hammerl’s family he was dead. The Libyan government had assured Hammerl’s family and the South African government that Hammerl was alive.

“We knew collectively that if we spoke about Hammerl’s death while we were detained, we would be in greater danger ourselves,” Foley said after their release. “But now that we’re free, it’s our moral imperative to tell the story of this great journalist and father.”

For Hammerl’s family, the revelation that he was dead was worsened by the realisation that the Gaddafi regime had lied to them. “Words are simply not enough to describe the unbelievable trauma. From the moment Anton disappeared in Libya we have lived in hope as the Libyan officials assured us they had Anton. It is intolerably cruel that Gaddafi loyalists have known Anton’s fate all along and chose to cover it up.”

In April this year it was reported that the remains of a white male had been found in a mass grave in eastern Libya, buried along with a camera lens. Hammerl’s widow, Penny Sukhraj, told AP they hoped the identification would be positive. “We can only hope that the uncertainty will end soon, for while it does not change our grief, it may help bring a level of closure to us.”

Sukrhaj lives in London, where she and Hammerl had been based since 2006. They had three children, Aurora, 11, Neo, 8, and Hiro, who was only six weeks old when Hammerl was killed. In a moving tribute to Hammerl posted by Sukrhaj on Facebook in July last year, she explained: “After nearly five years of shooting mostly business-related portraiture, he was finally able to leave home for a two-week spell to document the events unfolding in Libya, confident that the family was financially comfortable, albeit at a vulnerable stage given the arrival of our youngest, Hiro.”

Because Hammerl died in Libya while working in a freelance capacity, there was no employer ready to step in and take care of his family. For this reason, on the anniversary of his death this year, Gillis and Foley announced a fundraising auction of contemporary photojournalism prints would be held at Christie’s in New York on 15 May, with the proceeds to benefit Hammerl’s children.

The auction was originally the idea of Human Rights Watch’s emergencies director Peter Bouckaert, who had closely followed the Hammerl case. Bouckaert posted on Facebook: “Anton’s death… leaves behind two young children. I am wondering if we can’t organize a common print auction where various photographers donate a favourite print.” Gillis and Foley took the idea and ran with “Friends of Anton”.

“Besides raising funds for [Hammerl’s children], the evening aims to highlight the sacrifices made by photographers – particularly freelancers – who assume great risks to bring back images.”

The photographic community rallied in response and 75 extraordinary prints were produced for auction, notably, Robert Capo’s iconic picture of American soldiers landing on Omaha Beach on D-Day in 1944. Among those who donated work was “Bang Bang Club” photographer Joao Silva, who lost his legs while covering Afghanistan in 2010. The families of Tim Hetherington and Chris Hondros, journalists also killed in Libya last year, donated work as well.

The event was hosted by CNN’s Christiane Amanpour, who paid tribute to Hammerl’s “solid and strong group of friends”. She described photojournalists as “the real royalty in this profession” because they “go to the frontest of the frontlines, and they often pay the most heavy price”.

At the auction, however, the only heavy prices being paid were for the photography on offer, with only six prints going unsold. In total, more than $135,000 (about R1,128,000) was raised through the auction, online ticket sales and donations on the night. Friends of Anton reported Penny Sukrhaj was “over the moon” and that Hammerl’s mother was “gobsmacked”. The auction’s success represents one piece of good news in an otherwise terribly bleak story. DM