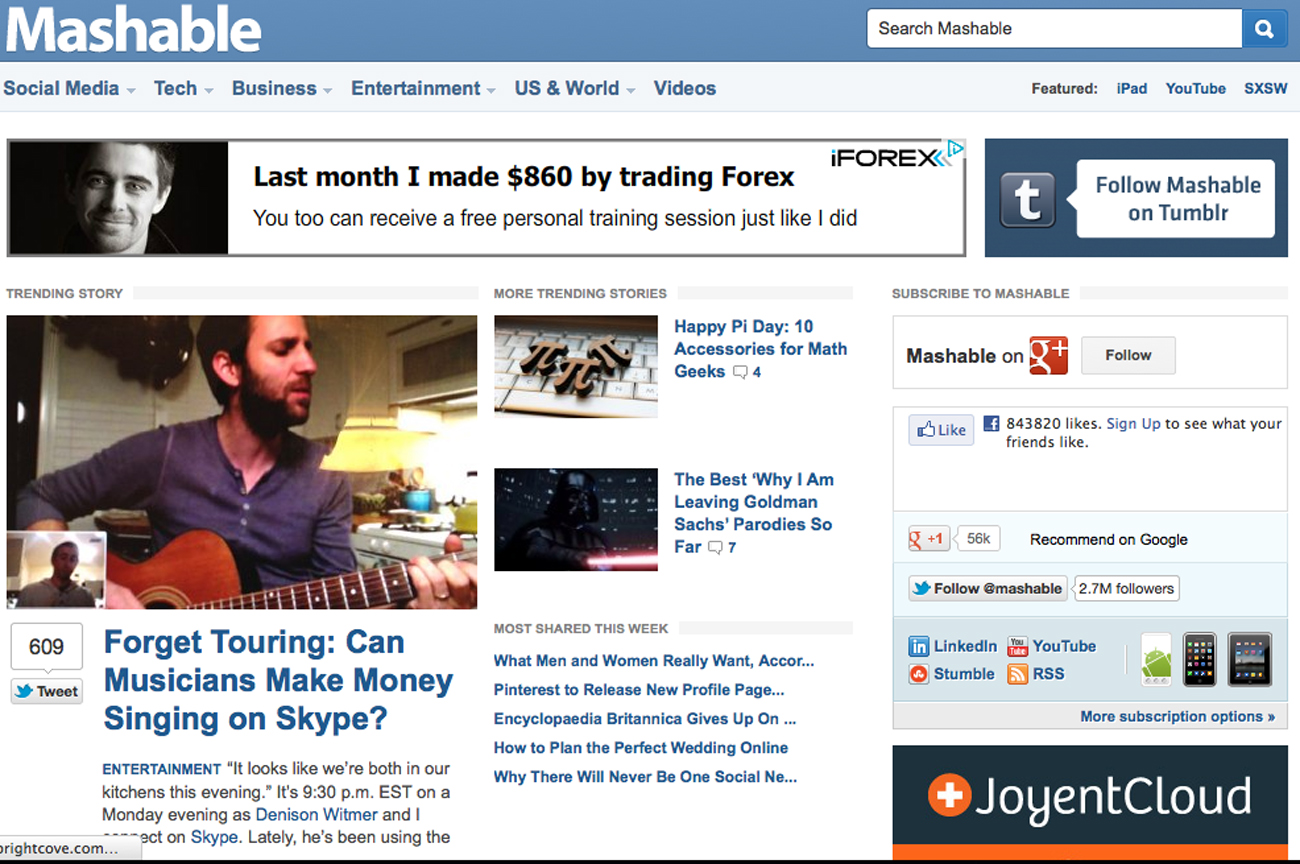 The Internet is often touted as an egalitarian space, but not all websites are created equal. REBECCA DAVIS looks at four sites, which have the power to ensure the viral spread of information.

If you haven’t watched the Kony 2012 documentary yet, it’s just you and a few herdsmen in Mongolia. This is an exaggeration, of course, but the 30-minute short film has become the most viral video in Internet history since its release last Monday. Interestingly, this does not make it the most viewed video in Internet history: that distinction goes to the Justin Bieber music video for Baby, the first clip to earn over half a billion views. What distinguishes Kony 2012 is the speed with which it spread: it took Baby 56 days to reach 100-million views, a feat accomplished by Kony 2012 in just over a week.

Predicting whether or not a video may go viral is an uncertain science, to say the least. But what is clear is that there are a crop of websites which have the influence to make Internet material go viral quicker and more effectively than any others. The website on the lips of Internet addicts this week is Mashable, the site for “digital, social media and technology news and information”. CNN is reportedly in talks with Mashable to buy the site for $200-million – pretty sweet for a site started by a 19-year-old. In the ever-changing, labyrinthine landscape of the Internet, it can be hard to keep track of what’s hot and what’s not. Here’s a look at four websites – neither traditional news outlets nor social networking sites – which are consistent big-hitters in terms of influence and views.

Content: Mashable used to focus almost exclusively on news relating to social media. Social media is still its bag, but it also does more general technology news, with a smattering of business.

Political leanings: Tough one, because it’s so tech-focused. But it seems even-handed: while it’ll run a blog advising President Barack Obama how to get re-elected using digital media, this week it also posted an article in defence of the controversial fact that tech conference SXSW had turned homeless people into mobile wi-fi hotspots by giving them 4G routers to wear.

Claim to fame: The website itself asserts that: “Numerous studies and leading publications have declared Mashable the most influential online news outlet”. Gawker calls its founder, Pete Cashmore, “the planet’s sexiest geek”.

Content: Your one-stop time-wasting shop for viral content on the web. The site is a repository for currently-circulating memes of any kind: stories, videos, photos and lists.

Most likely to: Post hyperbolic photo lists of The 50 Worst Tattoos Ever, or The 30 Most Adorable Baby Animals You’ve Ever Seen.

Least likely to: Deliver any kind of content which is not focused on identifying that which is cute, weird, related to celebrities or focused on personal relationships.

Political leanings: BuzzFeed is a slave to vox populi, so it’s fair to say it’d post pretty much anything as long as it was currently causing a stir on the web.

Claim to fame: The website not only publishes viral content, it also experiments with creating viral content through its “top secret R&D lab”. The results are mainly Jackass-type experiments: testing whether it is possible to cook bacon and eggs on the pavement on a really hot day, for instance, and then filming the results.

Content: The self-proclaimed “most important site on The Whole Internet”. Gawker originally focused on New York-centric gossip, following up anonymous tips. Recently it cast its net wider, incorporating political news and commentary and breaking significant stories. At the time of writing, its lead item was a scoop about the FBI having placed animal rights and environmental activists under secret surveillance for three years. These quite serious stories sit incongruously next to features like its notorious “Blind Items”, where Gawker invites commenters to guess which celebrity has been carrying out which shenanigan, based on an unnamed description.

Least likely to: Run with any story which reads as objective. Its tone is strident, bitchy and judgemental.

Claim to fame: In February 2011, Gawker published an email exchange between married Republican congressman Chris Lee and a woman he had met through a Craigslist personals ad, where he was pretending to be a divorced lobbyist. Lee resigned three hours later.

Content: The widest-ranging ambit of any of the four, and the most international view. “HuffPo”, as it’s known, covers everything from politics to business to celebrity gossip to science, though its main focus remains politics. The juxtaposition of fairly “high-brow” analysis with cute animal content makes for a head-spinningly busy homepage, where thousands of bloggers jostle for space with viral videos. In 2011 the Huffington Post was ranked the third most-read news website online, after traditional outlets The New York Times and the Mail Online.

Most likely to: Ensure diversity of representation: it has sections reserved for women’s interest news and “Black Voices”, “Gay Voices” and “Latino Voices”.

Least likely to: Miss anything remotely newsworthy happening anywhere in the world.

Political leanings: Left. Republicans have repeatedly moaned that they believe the website to be hostile to them. Huffington Post has been labelled an “advocacy newspaper”.

Claim to fame: HuffPo’s founder, Arianna Huffington, is a fearsomely impressive figure in online media, consistently placing highly in annual lists of the Most Influential Women in Media. In her personal capacity she has three times been accused of plagiarism, for books she authored in the 80s and 90s on Maria Callas, Pablo Picasso and Greek gods. In April last year she was likened to a “slave owner” in a lawsuit which sought $105-million in damages for over 9,000 uncompensated HuffPo bloggers. DM