Reality of the sordid underbelly of “the most beautiful Cape” 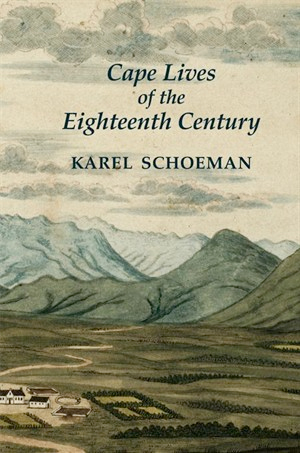 Karel Schoeman’s sumptuously-produced Cape Lives takes the pulse of colonial society at the Cape of Good Hope in the concluding decades of the Dutch period. A hefty 676 pages, it is a rich pudding from which to pull out savoury plums.

This volume also immediately brings to mind two other completely contrasting books. One is Nigel Penn’s Rogues, Rebels and Runaways (1999), an elegantly-crafted collection of portraits of Dutch Cape characters, which is a reminder that these waters have been fished before. The other is Paul Langford’s volume on the eighteenth century in the Oxford History of England, A Polite and Commercial People (1989).That witty title would require merely the slightest adaptation to A Coarse and Commercial People to reflect the more venal, ruffianly and demonically lascivious of the Dutch who people the pages of Schoeman’s biographical explorations.

Oenophiles of Muratie Wine Estate’s eponymously-named Ansela van der Caab red blend will encounter this hazy female figure in Schoeman’s account. A locally-born Stellenbosch woman, “possibly a former slave” or “most likely to have been coloured”, she shared a bed and more besides with a German immigrant. His sprawling family, the Camphers, make up one of the threads of this patchwork of varied individuals, men and women already familiar to the author through earlier historical excavations. Cornelis Campher and his “Ansiela” or “Anselaar” join a dozen other individuals, several couples and a brace of families to constitute this historical tableau, a motley group the author considers to have been “reasonably representative of the eighteenth-century Cape”.

The main characters we follow are mostly male, although women, such as the wily, adulterous and murdering Maria Mouton, get accorded as much as can be given due to the paucity of the record. Some of the eighteenth century lives depicted here are Cape-born, while others are Dutch, German, Bengali Indian and French-speaking. The collection pulls together an impressive colonial cast that includes an upstart South Asian slave, frontier farmers, housewives, a Cape governor, a Xhosa chief, a Moravian missionary and an assortment of minor Dutch East India Company (VOC) employees. Most would have been considered white, and the rest non-white according to the conventions, assumptions and prejudices of the time. The looseness of those standards supplies some of the juiciness of Cape Lives. Ancestry, including that of German-Khoi, could be a fast-and-loose affair, and some of Schoeman’s chosen individuals lived along a fairly porous colour line.

Here, with seeming effortlessness, he captures mood and character, time and place. Thus, the volume opens in 1684 with a minor VOC functionary, JG de Grevenbroek, who arrived in Table Bay after a four-month voyage from Batavia. “What”, the author asks, “would Grevenbroek have seen from the deck of the East Indiaman” as it neared the shore? Starting with the routine roll-call of Cape peninsula mountain names blurted out by a look-out in the crow’s nest, we, too, share his unfolding vista, picking out the VOC Castle, its gardens, the austere slave lodge, and sniff at a skinny colonial settlement. De Grevenbroek is, in effect, a peephole into a rickety warehouse from which ‘freemen and slaves, Christians and non Christians, Company employees’ and a fringe of ‘detribalised Khoikhoi’ scratched out a living, a pocket of sharp opportunists of whom many were born for the bargain.”

This thumbnail sketch provides most of the bearings readers will need to know where they will be going, as Schoeman’s dramatic character portrayals carry a large and diffuse account of galloping development and major change in Cape colonial life, both rural and urban. It ends, appropriately enough, where it started in Table Bay, with the murky death in 1795 of the book’s last figure during the twilight of the VOC’s administration of the Cape. He was buried close to the shoreline, in ground over which JG de Grevenbroek himself might have walked more than a century earlier. That last Cape life to be charted is that of the prominent Dutch-Scottish military officer, adventurous traveller, explorer and artist, R J Gordon. Always as much an orange burgher as a tartan Rob Roy, the inquisitive and troublesome Colonel Robert Gordon’s imposing travel writings and fondness for entertaining his visitors with a mixed repertoire of Khoi and Gaelic songs tell their own little picaresque story of identity and colourful cultural sensibilities in the early Cape.
Any biographical studies of historically distant subjects — not least ones as distant as Chief Rharhabe or the Prinsloos — require delving into all manner of circumstantial human contingencies and speculation about psychological, social and political motivations, alongside tentative fabrications of the hopes, anxieties and governing rationale of inner worlds. The author’s touch at this level is admirably light, rarely pressing things too far and rightly leaving factual mysteries or uncertain actions to be mulled over by readers. So, while it is a reasonable assumption that in the early 1700s Maria Mouton would have gone about her Paarl valley farm as barefooted as its slaves and would have had no knowledge of a handkerchief, Schoeman scrupulously avoids any guessing games as historical detective. In the rumour-riddled case of an unhappy Robert Gordon, as the available evidence is slippery on whether he had committed suicide or had been shot by a mysterious assailant, “it seems not only charitable but sensible to leave the verdict open”.

In so weighty a work of documentation and reconstruction it is almost inevitable that some of the vast amount of material the author has amassed gets recycled or repeated in differing material contexts or in slightly different words. There is, after all, only so much that is fresh to be said about gardens, estates, marriage, divorce, slave ownership, foodstuffs, “servanthood”, Khoi mistresses, social climbing, clothing, warfare, hunting and a myriad other fascinating topics and themes.

Equally, this really is no more than a minor quibble about a book that so unflinchingly lays bare so much of the Cape’s past it has to command the highest scholarly respect. While giving intrigue, gossip and fancy living its due, Schoeman’s Lives are not those of a cosy Dutch Cape life, romanticised by more popular writers who have traded grubbiness for gentility. As the author notes of the knowledgeable and diary-keeping Johanna Duminy, while she and her well-upholstered family “may indeed have been representative of their own well-to-do class”, in “examining their life style and recreating it for the benefit of the modern tourist industry it is well to bear in mind the parallel existence” of poorer members of the white settler community. One of those represented here was “Machtelt Smit with her origins in the Slave Lodge and the Liesbeeck Valley, her marriages to working men, and the crushing series of deaths which marked her married life”.

The world of another more lowly woman, the promiscuous Maria Mouton who chose badly when straying from marriage, reveals just how deadly and terrifying a place the Cape was. A white woman sentenced to death by strangulation and burning for adultery with a “heathen” slave, Mouton’s blighted life provides circumstances for more than just an astute observation on sexual codes and gender inequality. What it serves up is a gory catalogue of the judicial punishments meted out to those who fell afoul of the VOC order of things – branding, scourging, mutilation, amputation, impalement, roasting, drowning, strangulation, breaking on a cross and shredding with red-hot pincers. These horrors appear to have been carried out with a casualness – and even a sense of relish – by executioners and their assistants. Anyone who follows the optimistic argument of the psychologist Steven Pinker’s The Decline of Violence in History and its Causes (2011) that the cruelty and violence of human beings has been in steep decline since early history may find Cape Lives a perversely comforting confirmation of how much less atrocious Table Bay, Piketberg or Camdeboo have become.

This book’s informativeness about the Dutch Cape’s punitive violence is matched by the knowledge of every other aspect of the social universe inhabited by the lives its author has caught and digested. This shows everywhere, including in the index. Instead of being packed to the gunwales as one might have expected, this is a remarkably compact collection of jewels. Under “e” you will find “edifying literature” alongside “elephants”, while “s” will get you “slave orchestras” along with “Sea Point”. As attractively fluent in English as in Afrikaans, in his meticulously-crafted set of essays Karel Schoeman lets you have it, the lot. DM

Photo: The original cover of Cape Lives of the Eighteenth Century by Karel Schoeman, (Protea, 2011).