Will law changes put disabled whites out in the cold?

Will law changes put disabled whites out in the cold? 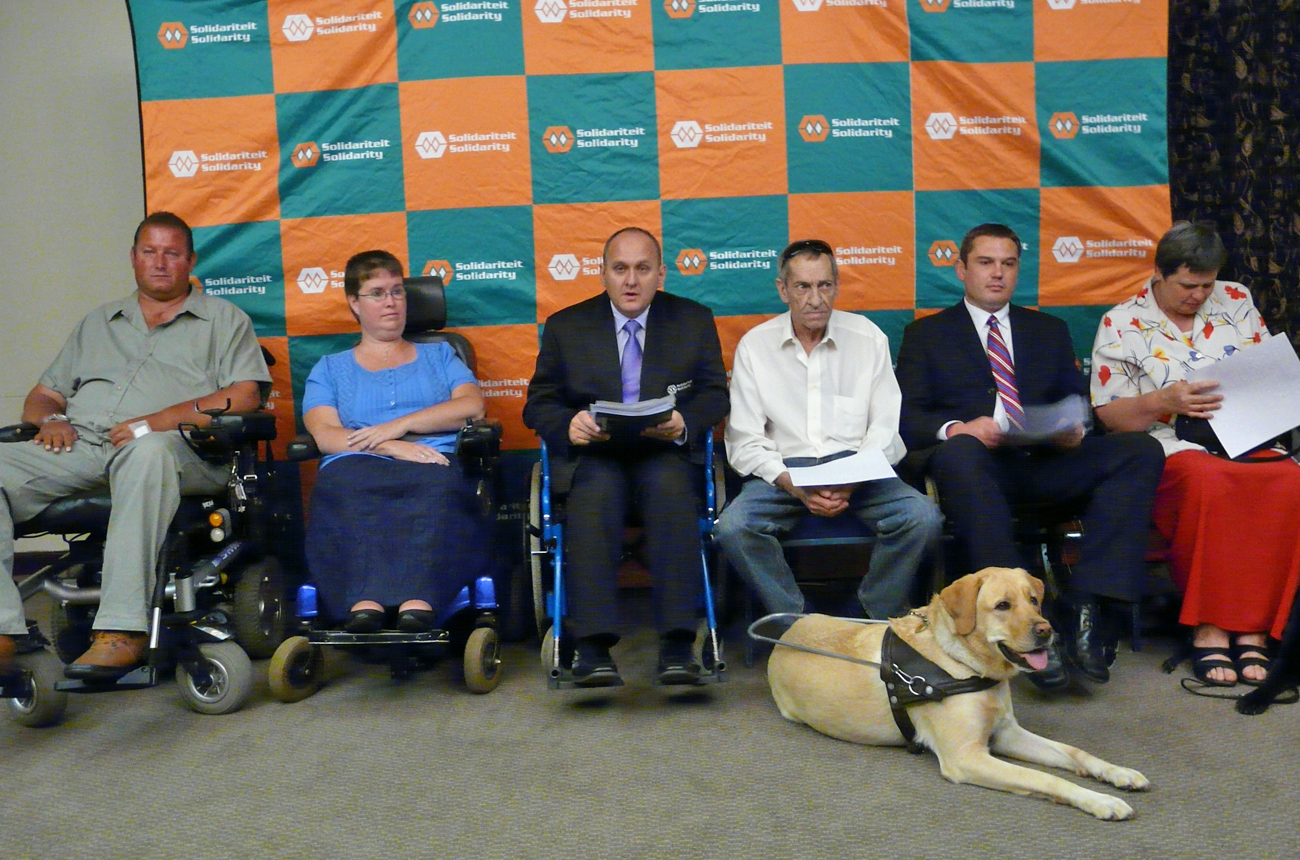 Trade union Solidarity says the proposed amendments to the BBBEE Act will result in disabled white people being unfairly discriminated against on the basis of race by excluding them from the definition of designated groups in the Employment Equity Act. But this depends on a reading of the BBBEE Act, which is probably wrong. By SIPHO HLONGWANE.

On Tuesday, Solidarity hosted an evocative press conference in Pretoria. It argued that proposed changes to the Broad-Based Black Economic Empowerment Act of 2003 would eventually result in disabled white people being unfairly discriminated against.

Journalists at the press conference were required to move around in wheelchairs, while the press release was initially handed out in Braille. The idea was to demonstrate that disability knows no colour and burdens all people equally.

The Employment Equity Act of 1998 provides that the beneficiaries of the legislation are Africans, coloureds, Indians, women and people with disabilities. The BBBEE Act excludes whites as beneficiaries. Instead it focuses exclusively on Africans, coloureds, Indians, including women, workers, youth, people with disabilities and people from these groups who live in rural areas.
In the Amendment Bill, Section 23(1) will read: “If any conflict relating to the matters dealt with in this Act arises between this Act and the provisions of any other law save the Constitution and/or any Act expressly amending this Act, the provisions of this Act will prevail.”

Solidarity says a conflict will arise between the EE Act and the amended BBBEE Act because both share a common purpose or objective.

“The EEA and the BBBEE Act of 2003 share the purpose/objective of achieving equitable representation in all categories of the workforce. The recognition of this nexus is critical for the understanding of Solidarity’s critique of the Amendment Bill,” Solidarity said in a statement.

The EE Act defines its purpose as: “Implementing affirmative action measures to redress the disadvantages in employment experienced by designated groups in order to ensure their equitable representation in all occupational categories and levels in the workforce.”

The BBBEE Act says broad-based black economic empowerment means, among other things, achieving equitable representation in all occupational categories and levels in the workplace (of the designated groups).

According to Solidarity deputy secretary general Dirk Hermann, companies that have to adhere to the provisions of the EE Act and the BBBEE Act when employing personnel will adhere to those of the latter, because of the overriding powers it grants itself. And because of that exact clause, disabled white people who are unfairly discriminated against will have no recourse before the Labour Court, as the BBBEE Act’s definition of designated groups (which excludes white males for now) will prevail.

The deadline for comment on the amendments to the BBBEE Act was 7 February 2012.

“The paradox here is that white people with disabilities were removed from the definition of the designated groups on the basis of race and not their disabilities,” Hermann said. “Black people with disabilities are still included in the definition of the designated group, however, and special provision is made for them on the grounds of their disability… The exclusion of white people from empowerment is turning South Africa’s empowerment process into a purely racial process instead of a bona fide anti-discrimination process.”

Hermann indicated that a possible Constitutional challenge against the proposed amendment may lie ahead, based on the founding principles of the Constitution as well as Section 9.2.

“We’ve asked senior counsel to prepare papers. But we’re still going through the political process first. We will petition the minister [of trade and industry Rob Davies] first, and the Act has also to be passed by Parliament.”

Remember that Solidarity’s complaint hinges on it interpreting the purposes of both Acts as being essentially the same, thus putting its two definitions for designated groups on a collision course.

According to Michelle Naidoo, a labour and employment lawyer and director at Norton Rose, the amendment to the BBBEE Act will have no impact on the right of white people with disabilities to pursue claims for unfair discrimination within the employment context.

“It is important to note that both Acts are distinguishable in many respects including, but not limited to, the objectives and scope of application and the beneficiaries,” Naidoo said. “BBBEE has no direct effect on the employment relationship or to any potential claim that may be made by any employee against an employer for unfair discrimination. BBBEE overlaps with EE only to the extent that one component of the scorecard is assessed based on prescribed employment equity criteria that establishes targets for the employment of black people and black people with disabilities at certain levels. The primary objective of BBBEE is to promote economic transformation to enable meaningful participation of black people in the economy.

“EEA on the other hand applies within the context of an employment relationship. White people with disabilities and white women remain part of the designated group and are beneficiaries of affirmative action.

One of the main distinctions between the two Acts – one which Solidarity failed to make at the press conference – is that a claim for unfair discrimination in the employment context arises out of the provisions of the EE Act, which specifically points out that it is not unfair discrimination to take affirmative action measures consistent with the purposes of the Act. Section 15 of the Act is written to ensure that suitably qualified people from designated groups (which includes whites with disabilities) have equal employment opportunities and are equitably represented in all occupational categories and levels in the workforce.

The real purpose of the amendments to the BBBEE Act are the same as similar tweaks made to other laws: the people who are really at the receiving end of the modifications are foreigners.
To convince the Constitutional Court that whites with disabilities also fall foul of the proposed provisions, they’ll have to prove that the two laws cover exactly the same ground, and for the same purpose. Which they do not. DM