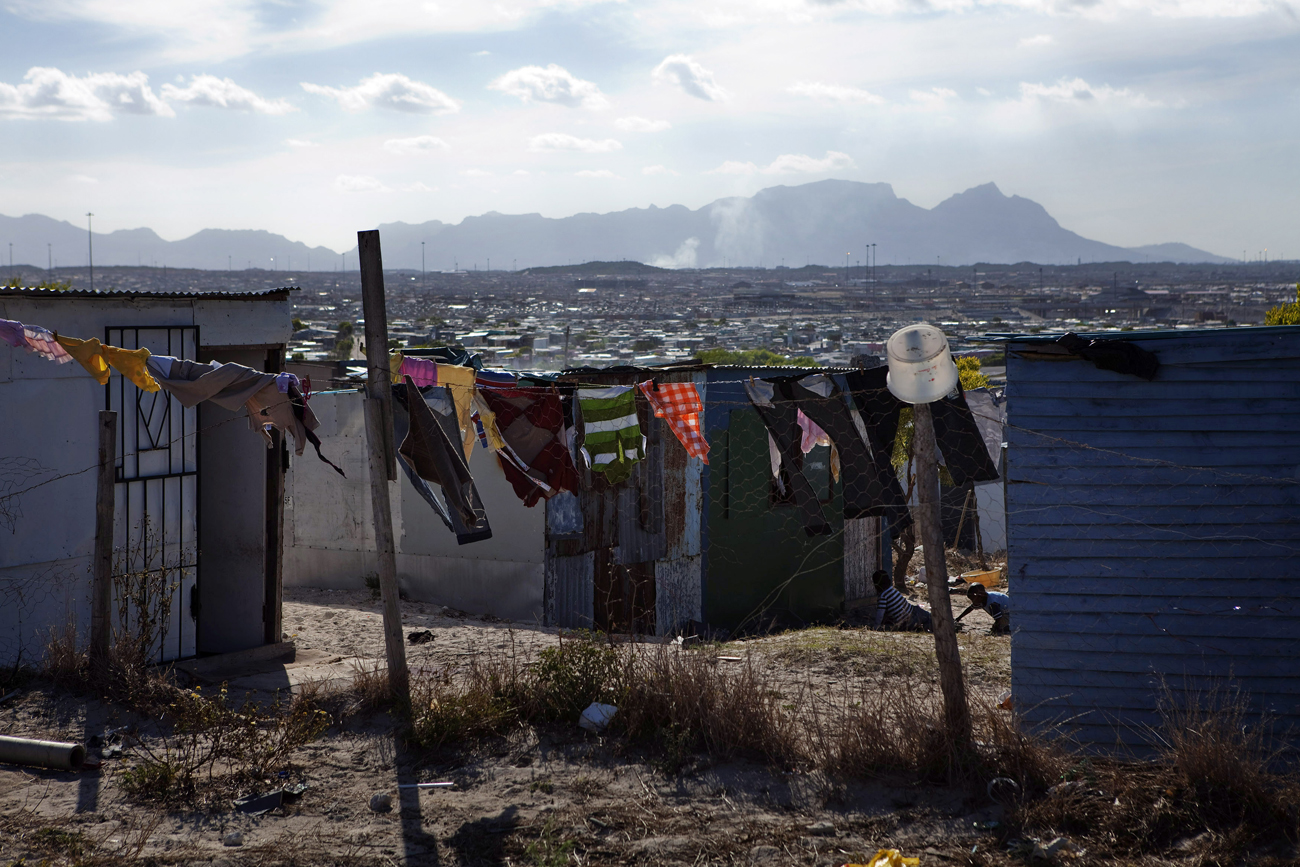 Justice has come slowly for Zoliswa Nkonyana, the 19-year-old woman murdered in Khayelitsha for being a lesbian. Sentencing is set for 19 December in a trail plagued by justice system flaws and failures. But this is the norm in a South Africa where brutalising or killing someone because of their sexual orientation is no hate crime, where rape’s under reported and most offenders get away scot-free. By MANDY DE WAAL.

Her name’s Zoliswa Nkonyana. If you follow the news closely or care enough about issues of gender and violence, you may have heard this name. Of late it is being used as a rallying call in protests against that crime they call “corrective rape”. This is when women who are lesbians are sexually assaulted, often stabbed and at times murdered, because they are not “real” or straight women.

In a country where gender rights are legislated, the first African state to legalise same sex marriages, attitudes towards lesbians reflect the dark reality of the patriarchal (and at times misogynist) society we live in. Cape Town is readily recognised as a city that “embraces” lesbian, gay, bisexual and transgendered people. More so it is celebrated globally for its apparent liberal attitudes to gays and lesbians. But take a 15-minute drive out of the city to Khayelitsha and declaring your sexual orientation can become a painful, if not dangerous, decision.

Nineteen-year-old Nkonyana lived an openly gay life in Khayelitsha. On the 4th of February in 2006 she went to Phela’s Tavern with some of her friends. Together they bought six beers, and by the early evening had consumed three.

An argument broke out between Nkonyana and a female patron at the tavern who was with a party of nine men. Eric Ntabazalila of the National Prosecuting Authority in Cape Town says the argument centred on the lesbians’ use of the ladies’ toilets.

“The argument was about Zoliswa and her friends wanting to use the ladies toilet while pretending to be ‘tom boys’. As the confrontation grew, one of the ladies informed their male friends who were at the tavern about their confrontation with Zoliswa,” says Ntabazalila, who has been working on this case for some time.

Three women were with the nine youths who were accused of murdering Nkonyana. One of the women turned state witness, and during the trial entered a private courtroom almost three years to the day after the soccer-loving lesbian was murdered. There, away from the public eye, she would tell the court officials how she begged two of the accused not to throw a rock on Nkonyana’s head.

In earlier testimony, this state witness said she had berated Nkonyana for using the ladies’ toilets. She admonished the lesbians, and said they should have gone to the male toilets because they were acting like men. This unnamed woman would later go to the nine men she was with, and tell them that Nkonyana made unwanted sexual advances towards her.

Upon hearing this, the men ran outside and started assaulting Nkonyana who tried to run away. “They caught her next to a school,” said the state witness, who told the court the men “started ‘klapping’ her (Nkonyana)”.

“Although I was far, I could see from a distance that they were beating her, making up and down movements. As we were running towards where Zoliswa was beaten, seven of the accused ran away and two of them were left behind. They were trying to pick up a big rock from a yard nearby.”

The brutal details of the case are easily accessible to anyone with Internet access. What’s illusive is who Nkonyana was.

It has taken close on six years for Nkonyana’s murder trial to come to an end. The litany of blunders and failures by the justice system offers its own insight into how brutal hate crimes against lesbians are viewed by our government and those who execute its mandate.

A civic alliance consisting of The Social Justice Coalition, Treatment Action Campaign, Free Gender, Triangle Project and Sonke Gender Justice have lobbied, protested and tried to realise justice for Nkonyana and her family. But it’s been a terrible struggle. The alliance says there have been 40 postponements during the trial. The main state witness was attacked after a photograph of her appeared in the press. She fled from the Western Cape in fear of her life. This witness was abandoned by the criminal justice system, which offered her no protection or support.

The initial investigations in the Nkonyana case were slow, and the civic alliance accuses the state of negligence. In 2008 the state failed to ensure witnesses were present and was found to have committed gross negligence. Defence attorneys routinely missed court appearances without repercussion. In 2010 four of the accused escaped from their holding cells. A police sergeant was arrested for aiding the escape and defeating the ends of justice. There were nine accused young men in the Nkonyana case. They were all charged with murder and two charges of attempted murder. All were under age when they were arrested.

In October of this year Lubabalo Ntlabathi, Sicelo Mase, Luyanda Lonzi and Mbulelo Dama were found guilty on the charge of murder. Sabelo Yekiso, Themba Dlephu and Mfundo Kulani were acquitted because the state could not prove their involvement in the murder beyond reasonable doubt.

The sentencing of the four guilty men has been postponed twice. It is now expected to take place on 19 December, but given the history of postponements there is no guarantee this will still take place this year.

And so the story of this young lesbian woman from Khayelitsha, whose image is emblazoned on placards and T-shirts in protest of a system that largely abandons victims of township hate crimes, ends as it began.

In February 2006 Zoliswa Nkonyana was murdered. About two weeks later, a small story of the death was carried inside a Sunday newspaper, which used a photograph of the key state witness without her permission, forcing her to flee. The Triangle Project then called journalist Marianne Thamm to ask her if she would cover the story, which she did for Mail & Guardian.

“What was interesting at the time and indicative of the disjuncture between the lives of people in townships (lesbians and gay men included) is that the news took so long to get out,” says Thamm, who adds that one news editor’s response about this issue was: “Nobody told us.”

“At the time I think there had been one other murder of Eudy Simelane in Gauteng. Zoliswa’s murder and the subsequent first ever Gay Pride march by some 600 people had also been totally ignored. I wondered how editors might have responded to the story had it been a white lesbian clubbed to death with golf clubs on the promenade in Sea Point?” Thamm asks.

“At the time I spoke to Zoliswa’s mother, who was wonderful and said that she had always supported her daughter. I contacted the detective (and now this was three weeks later) who was investigating the case to find out whether he had taken a statement from sole witness and he told me he hadn’t managed ‘to get around to it yet’. He could not explain why,” says Thamm adding: “The lack of concern from the start, from the police especially, to me was a metaphor for the bigger picture.”

Gender equality remains embarrassingly absent from the media’s corridors of power with feminists accusing the local press of still practicing gender apartheid. A survey by Print Media SA shows only 4.4% of board members and senior managers in the sector are women. It comes as no surprise to discover that violence against women remains under reported, and rape is rarely the subject of analysis or editorials.

If, as Thamm says, a white lesbian was stabbed, assaulted, had her head bashed in with a rock and was left dead, with her blood trailing down some street in Sea Point, there’d be a massive press frenzy. South African’s would know the very minutiae of that woman’s life because of the wide media interest it would provoke.

Nkonyana is relegated to an effigy, a file photograph pulled by a press that now covers the story because it conveniently illustrates how our criminal justice system is going to the dogs. To people outside of her family, friends or Khayelitsha’s gender movement, Zoliswa Nkonyana is a name and face devoid of all the narrative that would make her human.

South Africa is a country with a liberal, gay-friendly Constitution, but lesbians continue to be “fixed” with rape and brutally murdered. Yet our government refuses to acknowledge this as a hate crime and doesn’t even keep statistics on corrective rape. The police are slow to investigate and often display the same patriarchal or misogynist attitudes as the perpetrators of these crimes. Most rapes go unreported.

Sipho Mthathi, the director of the Human Rights Watch in SA explains why: “Almost every lesbian woman or transgendered man we spoke to… the sentiment was we’re not going to go to the police, we’re not going to go to government institutions because the burden of proof is on you.” Human Rights Watch recently released a report on violence and discrimination against black lesbians and transgender men in South Africa called “We’ll Show You You’re a Woman”.

In an interview with CNN, Mthathi says: “Sexism is still very deeply embedded here, there is still a strong sense among men that they have power over women, over women’s and their bodies. There is also a sense that there is not going to be consequences because most often there are no consequences.” DM