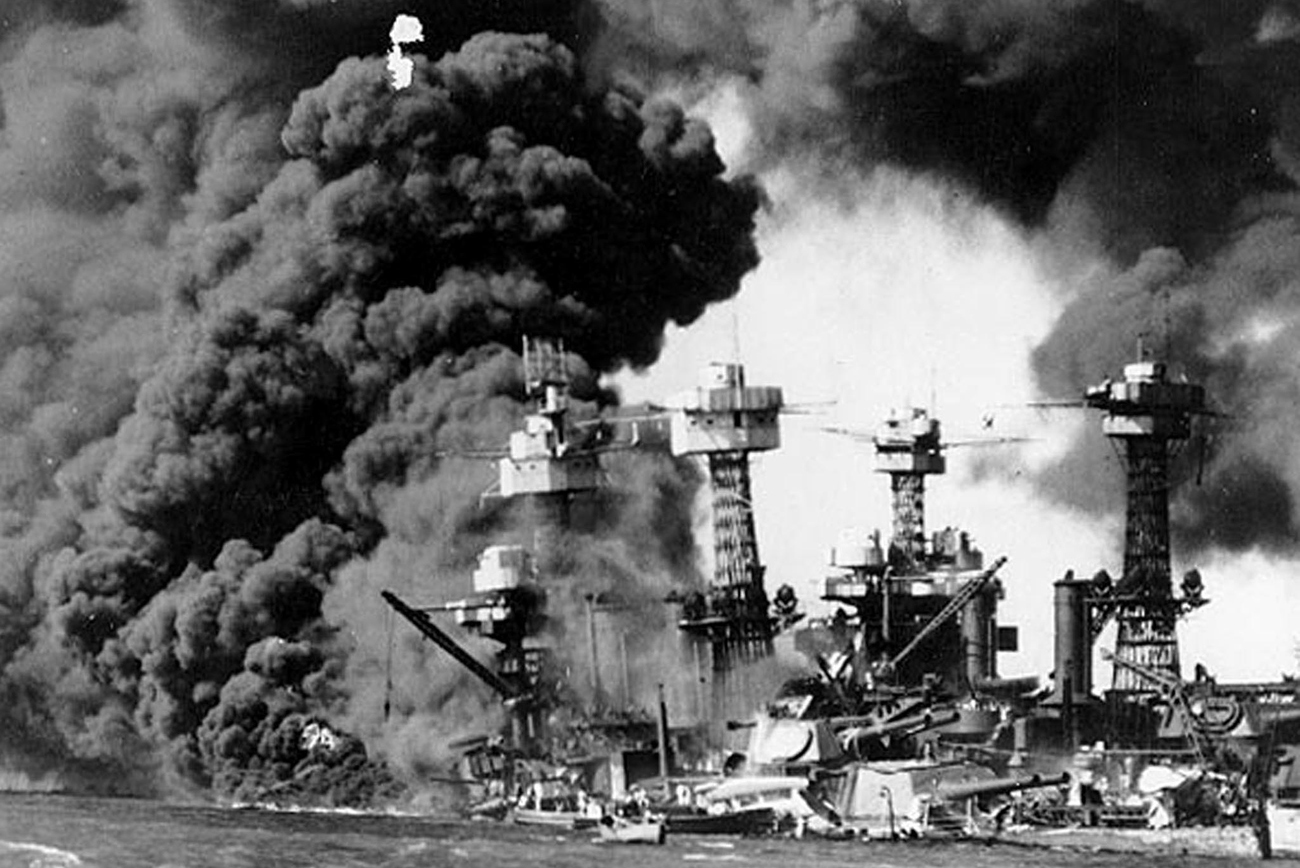 The idea that the administration of Franklin D. Roosevelt had advanced knowledge of the Pearl Harbour attack, on 7 December 1941, has long been a favourite trope of conspiracy theorists. But, as history shows, a far more dangerous and authentic conspiracy was being hatched by US Republicans and men like Charles Lindbergh. By KEVIN BLOOM.

It would be easier to commemorate the 70th anniversary if it weren’t so, but the fact is that plugging Pearl Harbour into Google returns a 90 percent response with the word “conspiracy”. The central one, from which most of the others is derived, is called the Pearl Harbour Advance-Knowledge Conspiracy Theory, and contends in summary the following: a number of high-ranking officials in the British and US governments knew of Japan’s plans to attack the Hawaiian naval base in advance, and allowed it to happen in order to force America into the war. You’ve heard the argument before, no doubt, and, being of sound mind, you’ve dismissed it. And yet even today, seven decades later, evidence is coming to light that suggests there might be something to the hypothesis.

For instance, a newly declassified 26-page memo from the US Office of Naval Intelligence, dated 4 December 1941, which states: “”In anticipation of possible open conflict with this country, Japan is vigorously utilising every available agency to secure military, naval and commercial information, paying particular attention to the West Coast, the Panama Canal and the Territory of Hawaii.”

The memo, according to an article published in the Telegraph on 4 December 2011, goes on to note details of “possible subversives” in Hawaii – where, in 1941, nearly 40 per cent of inhabitants were of Japanese origin – and of how Japanese consulates on America’s west coast had been gathering information on American naval and air forces. Japan’s Naval Inspector’s Office, the memo added, was “primarily interested in obtaining detailed technical information which could be used to advantage by the Japanese Navy.”

Three days after this communiqué was delivered to the White House, just before 8am in the morning, 353 Japanese fighters, bombers and torpedo planes, launched from six aircraft carriers in the Pacific, attacked in two waves.  The barrage, which lasted only two hours, was devastating – the Japanese managed to destroy nearly 20 American naval vessels, including all eight battleships of the Pacific Fleet, and almost 200 airplanes. More than 2,000 Americans soldiers and sailors lost their lives in the attack, and another 1,000 were wounded. A day later, on 8 December, President Franklin D. Roosevelt successfully asked Congress to declare war on Japan. Three days later, Japanese allies Germany and Italy declared war on the United States, and once more Congress reciprocated.

Again, did Roosevelt – aided and abetted by senior officers in the War Department – willingly make the above sacrifices in order to turn the tide of American opinion, which up until then had been against the country’s entry into a perceived “European” conflict? Was Pearl Harbour the predetermined mechanism that allowed the US President to act upon his long-held (albeit not official) support for the Allied forces?

The historian Craig Shirley, who revealed the contents of the 26-page memo in a new book entitled December 1941: 31 Days that Changed America and Saved the World, thinks not. “Based on all my research, I believe that neither Roosevelt nor anybody in his government, the Navy or the War Department knew that the Japanese were going to attack Pearl Harbour,” he told the Telegraph. “There was no conspiracy… This memo is further evidence that they believed the Japanese were contemplating a military action of some sort, but they were kind of in denial because they didn’t think anybody would be as audacious to move an army thousands of miles across the Pacific, stop to refuel, then move on to Hawaii to make a strike like this.”

As with the 9/11 terrorist attacks, Shirley continued, the US leadership was guilty of a “failure of imagination” in its inability to translate warning signs into a specific prediction. And given a little-known documentary about the carelessness of American preparations for a Japanese attack – a documentary that had in fact been hidden by the United States military apparatus for decades – it seems the historian has the balance of probabilities on his side.

This last story has as its central character the acclaimed film director John Ford, of How Green Was My Valley fame, who during World War II served as head of the photographic unit for the Office of Strategic Services (a precursor to the CIA), while also making documentaries for the US Navy Department. With the cinematographer Gregg Toland (Citizen Kane, Grapes of Wrath), Ford directed a 32-minute propaganda film entitled December 7th, a piece that won him the Oscar for best short in 1943, but that was in fact originally intended to run at an 82-minute feature length. It was the film’s portrayal of the American Navy’s tardiness, told via history and analysis, that caused the original cut to be banned by the US government for nearly 50 years.

Interestingly, in recent years, both the short and the long versions of the film have been assumed by various media outlets to contain live footage of the Pearl Harbour attack – and even the biggest have succumbed to the fallacy. Almost a decade ago, over Memorial Day Weekend, CNN ran a story about Disney’s Pearl Harbour blockbuster (the one starring Ben Affleck that bombed at the box office and sank studio boss Peter Schneider’s career), interspersing it with “actual footage” from the Japanese attack in 1941. Problem was, to a few observant viewers, the shots looked too perfect to have been taken during the crisis. And these viewers’ instincts were spot on: the scenes that CNN deemed authentic were outtakes from Ford’s 1943 documentary, most of which had been shot in a Hollywood studio thousands of miles from the field of battle.

But while less than a minute of real footage exists from the December 1941 attack – it was reportedly shot by a doctor trying out a new movie camera, who caught the USS Arizona being blown up – the eyewitness accounts in print remain plentiful. Symbolic of the thousands of commemorative pieces that are being run all over the world today, the San Jose Mercury News has published the account of Gordon van Hauser, who was a young Marine stationed in Hawaii at the time. “Van Hauser was about to go on duty the next day, Dec. 7, when low-flying Japanese torpedo bombers – headed for Battleship Row and the Arizona – appeared out of a clear Hawaiian sky, rattling the Marines’ rooftops and strafing the parade ground. ‘I took my rifle, which was a 1903 model Springfield, and we were firing .30-caliber ammunition… as the Japanese torpedo bombers came in,’ Van Hauser said… Firing single-shot, bolt-action rifles scarcely better than muskets, he and about 800 other Marines brought down two or three Japanese zeroes, Van Hauser recalled, and watched them burst into flames.”

Of course, given that the survivors are now mostly in their 90s, it’s become imperative that their stories are recorded for posterity. As the New York Times reported yesterday, 6 December, the 70th anniversary will be the last that the Pearl Harbour Survivors Association officially commemorates: “The fact that this moment was inevitable has made this no less a difficult year for the survivors, some of whom are concerned that the event that defined their lives will soon be just another chapter in a history book, with no one left to go to schools and Rotary Club luncheons to offer a firsthand testimony of that day.”

How much 7 December 1941 defined the survivors’ lives is demonstrated by the last wishes of a number of sailors, who’ve asked that their ashes be returned to their ships after death. The majority of the ships that were sank that day have been removed from the harbour floor, their hulls salvaged for scrap – only the Utah and the USS Arizona survive relatively intact, and it’s only sailors from these two vessels who may have urns containing their remains placed in portholes by Navy divers.

Beyond the life-changing experiences of the men and women who were there, however, what messages does Pearl Harbour now hold for the US and the world in general? An intriguing answer is provided by author Nigel Hamilton, who argued in a recent piece for Huffington Post (“Pearl Harbor – and Our Moral Identity as a Nation”) that Republicans have never had much to crow about in terms of muscular foreign policy. “Republican isolationists had certainly tied the hands of every US president, year after year,” noted Hamilton, “berating Franklin Roosevelt in particular and his attempts to ready the nation for inevitable attack. Even Roosevelt’s plea that Congress extend the military training draft, in the summer of 1941, had only passed by a single vote. It was an uphill struggle – with men like Charles Lindbergh leading the defeatist charge against the president on behalf of ‘America First,’ arguing that it was already too late: that Nazi Germany was too strong to be resisted.”

It’s a chilling thought: what if Lindbergh had prevailed? One thing’s for sure, the prospect of that is far worse than the prospect (mostly discredited) that Roosevelt had prior knowledge of the attack, and allowed it to happen in service of a greater good. DM