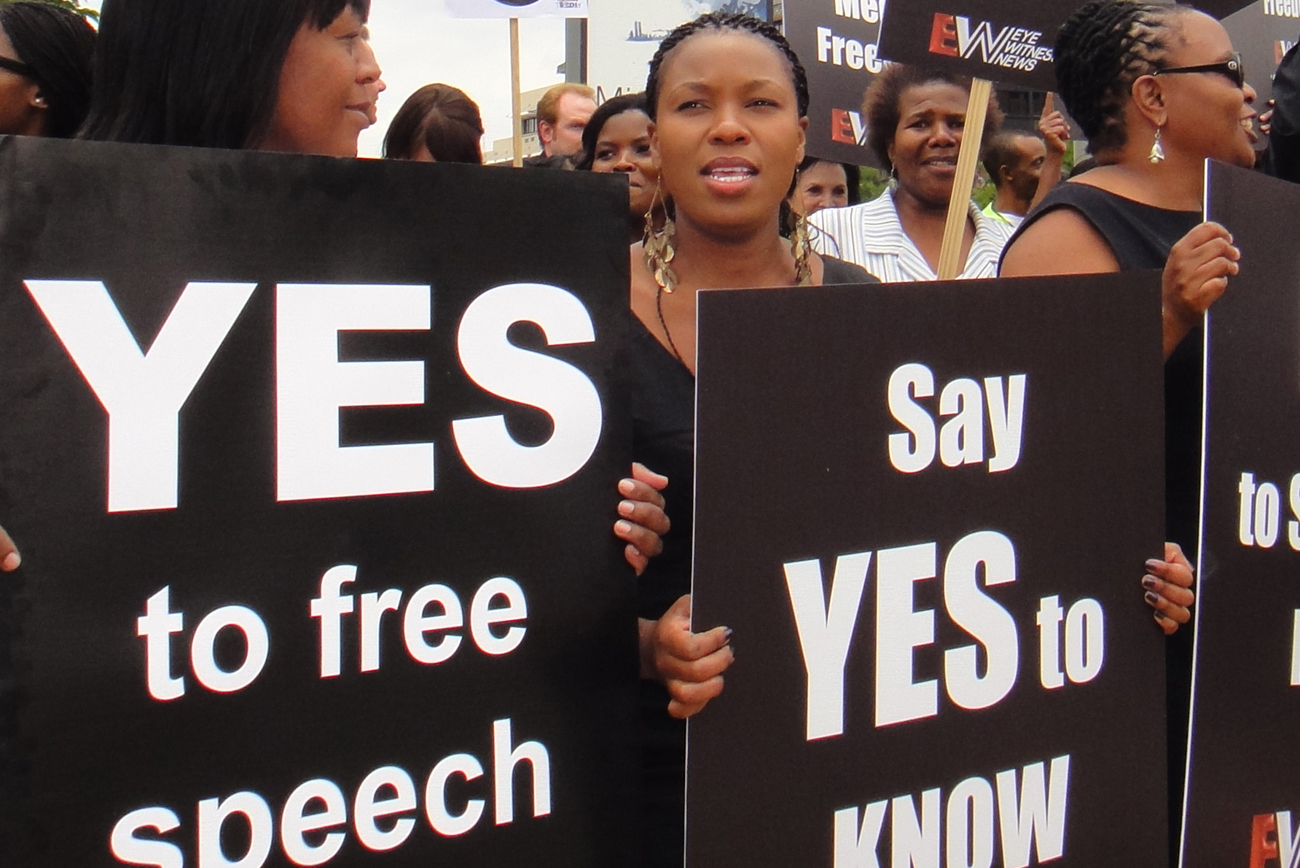 The National Press Club continued its Black Tuesday anti-Secrecy Bill campaign with a noon protest outside Primedia’s offices in Sandton. The gathering of about 60 journalists remained firm in its resolve to keep on speaking out against the Protection of State Information Bill, while continuing to engage with government on the issue. By THERESA MALLINSON.

“Today is Black Tuesday and if the government chooses not to give into the demands of the people, we’ll have Black Monday, Black Tuesday, Black Wednesday, Black Thursday, Black Friday, Black Saturday, and Black Friday. We’ll be here every day of the week to protest,” said Yusuf Abramjee, the head of the National Press Club and head of news and current affairs at Primedia Broadcasting. Abramjee, who reiterated the words he spoke outside Parliament exactly a week ago, was addressing the second Black Tuesday protest, held at noon outside the Primedia Offices in Sandton, on the corner of Gwen and Fredman Drive.

The first Black Tuesday protest, an initiative of the National Press Club, was held last week – the day the Protection of State Information Bill, better known as  the Secrecy Bill, was passed thanks to the ruling ANC’s majority in the national assembly in Cape Town.

As well as the National Press Club, other industry associations, including the Association for Communication and Advertising, the South African National Editors Forum, the Professional Journalists Association of South Africa, and the Cape Town Press Club, have all supported the call to make Black Tuesday an ongoing campaign to protest the Secrecy Bill.

And the Anglican Archbishop of Cape Town, Thabo Makgoba, has written an open letter to President Jacob Zuma to send the bill back to cabinet, before giving it his assent. “(A)cross the journalistic world, among members of civil society and trade unions, and in community-based and faith-based organisations, there are widespread concerns at both the severe sentences, and the wideranging provisions for classification of material by any organ of state. These have the potential to create an atmosphere similar to repressive apartheid censorship, and thereby gag the truth, hide corruption, conceal maladministration, incompetence and unjust practices and stunt our open society at every level from the national and international to the most local,” wrote Makgoba. “Therefore, I respectfully appeal to you, sir, to consider sending the bill back to cabinet before signing it into law. We know that, if signed as it stands, it will be challenged in the Constitutional Court.”

Abramjee told Daily Maverick many South African journalists covering COP17 in Durban were also wearing black in solidarity. “We have thousands of people throughout South Africa today wearing black,” he added. “This is only the beginning.” Radio 702’s Aki Anistasiou kept the protesters’ spirits up by running up and down barking slogans into a megaphone. As usual at such demonstrations, passing cars hooted their support. Journalists and civil-society activists, including Danny Kay, representing Shout South Africa, Jeremy Mansfield, Jessica Pitchford from Carte Blanche; Katy Katopodis, editor-in-chief at EyeWitnessNews; and Abramjee himself all took their turn to say a few words.

Abramjee stressed that opposition to the Secrecy Bill was not about being opposed to the ruling party. “It’s not about being anti-ANC, or pro-opposition,” he said. “It’s about standing up and fighting for our rights and freedoms.” Abramjee also said Sanef will continue to engage with government and other bodies around the bill. On Wednesday the editors’ body is set to meet Cosatu secretary general Zwelinzima Vavi, and the Right2Know Campaign to discuss the bill. Both Cosatu and Right2Know firmly oppose the bill as it stands, and have indicated their willingness to take it to the Constitutional Court, should it be signed into law. On Friday, Sanef will meet with Public Protector Thuli Madonsela, whose office is currently investigating the bill. On Tuesday Sanef will meet with ANC chief whip Mathole Motshekga, as well as two representatives from Parliament’s ad hoc committee on the Protection Of State Information Bill – most likely ANC MPs Luwellyn Landers and Cecil Burgess.

The Black Tuesday initiative has been criticised as focusing only on the implications the Secrecy Bill has for the media, particularly investigative journalists, while ignoring the effect it will have on ordinary citizens, but Abramjee dismissed such criticism. “The media came up with the initiative,” he said. “(But we’re) sending a very clear message that this is not only about the media, but the rights of every citizen.” He added that any “struggle people” know there will be those opposed to their activities, but opponents of the bill will “take it on the chin”.

Abramjee ended off his address to the crowd by reminding them that there are still several process the bill must go through before it is finally passed. “We hope that the National Council of Provinces will continue to allow for ongoing consultation,” Abramjee said. “Even if it approves this bill we say to Zuma not to sign this bill into law – do the right thing.” However, he had stern words about what would happen if the bill did become law. “The day we win this battle in the Constitutional Court we want them (the ANC) to wear black as a sign of what they have done,” he said. DM