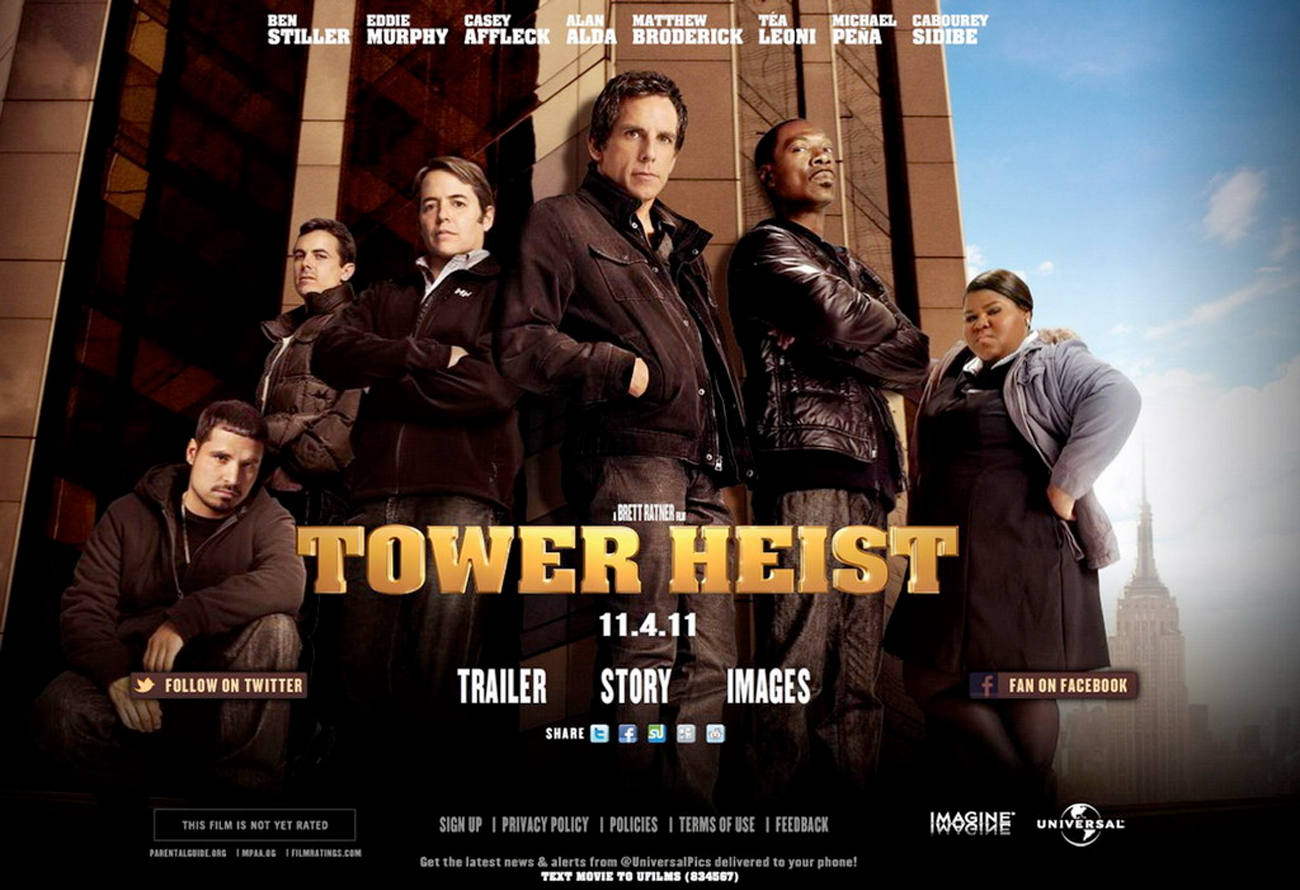 In what should theoretically be a heist film for our times, Tower Heist is broadly modelled on a Bernie Madoff-esque Ponzi scheme set in a mid-financial crisis New York, with the 99% bent on getting back what is theirs. By CARIEN ELS.

Josh Kovacs (Ben Stiller) is the building manager at The Tower, a luxury apartment complex in Manhattan, and home to investment kingpin Arthur Shaw (Alan Alda). When Shaw is charged with investments fraud, Kovacs, a long-time, dedicated employee is shocked to hear that his entire staff’s pension fund has disappeared along with all the rest of Shaw’s investments. Josh Kovacs is the one who asked Shaw to invest the money. And now he’s going to get it back.

Kovacs assembles an unlikely gang to try to steal the money he’s sure Shaw has hidden somewhere in The Tower. His crew? A few Tower employees, an insolvent banker and a crook: a cast that includes Casey Affleck, Matthew Broderick, Gabourey Sidibe, Michael Pena and Eddie Murphy.

Basically a remade modern high-rise Robin Hood, the little man takes on the big man in what should be a film that makes the little man (that’s most of us) feel good about ourselves. Like we outsmarted those greedy bastards on screen and we can bloody well do it in real life too.

Instead you walk out feeling like you do when you watch that rom-com where the guy rushes to the girl’s apartment after breaking her heart to find her gone (gasp!) and then high-tails it to the airport where he catches her just before she boards the plane, tears are cried, he promises to quit his pot-and-prostitute addiction, all is forgiven, and they live happily ever after.  It only happens in the movies.

Tower Heist has the same effect. Sure the good guys win on screen, but we all know that in the real world hedge fund managers are still spending $1,000 on a new dustbin, and the little guys are selling their furniture to pay their bonds. And the complete lack of logic or sense in Tower Heist doesn’t even allow you that tiny illusion of hope.

Unlike the original Italian Job, or Ocean’s 11 where, though improbable or incredible, the sequence and structure of the heist is still so rational and clever that you cannot help but sit in awe, this is not the case with Tower Heist.

Some of the greatest heist films of our time have that “aha!” moment when you figure out the great feint that allows the lovable villains to get away with a seemingly impossible grand-scale theft. Not Tower Heist. Two days later I am still trying to figure out how the undisclosed bounty managed to land up in the undisclosed location (no spoilers here) without anyone noticing.

One of the biggest calling cards for this movie is the return of Eddie Murphy to grown-up films (with the notable exception of his role in Dreamgirls). Murphy joins the gang of newly recruited vigilantes as Slide, the only actual criminal in the group. Though he succeeds in eliciting a few laughs, and very notably, manages to play a funny-ish criminal without diminishing him into a caricature, Murphy lacks the energy and spark of his earlier films.

By far the most enjoyable character to watch is Precious star, Gabourey Sidibe, who plays a Jamaican maid and also, unbelievably, a safe-cracker. She is funny and endearing simultaneously, and it’s also great to see a completely different side to this young actress.

On the note of showcasing versatility, Ben Stiller fails to persuade. I can’t help feeling that he is always the same, whether he’s a neurotic perfectionistic actuary or a rabbi in love with his childhood friend, or a building manager trying to relieve his boss of $20 million.

Wall Street financier Arthur Shaw (Alan Alda) is one of the more convincing characters. The multi-billionaire owner of the penthouse apartment at The Tower seems down to earth and kind, friendly to the staff instead of being condescending or rude as one would expect from a stereotypical villain. It is only once we see him cornered, with his assets at stake that his predatory streak emerges. Suddenly faced with this cruel and petty man, for a rare moment in the film, you are truly drawn to Stiller and his team’s cause.

Tower Heist is not as profound as it could have been, nor as funny as it should have been, but you’ll have a chuckle and a rare moment or two to absorb the immense impact the financial crisis has had on the normal working-class people out there, and how little their lives mean to those who have destroyed them. At the same time, if it’s unashamed escapism and fun you’re after, Tower Heist will suffice as long as you don’t look too hard at the plot or its gaping holes. DM