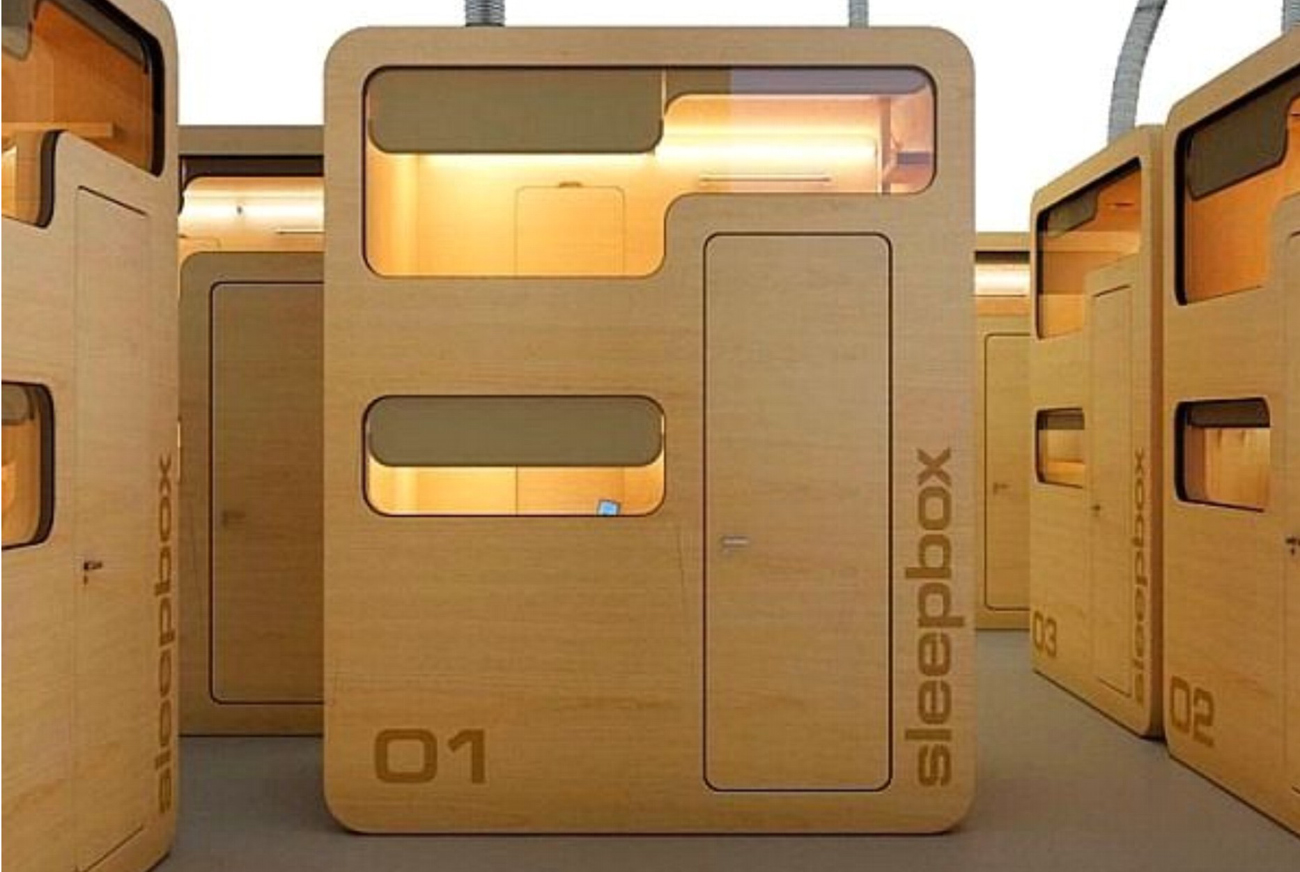 Endless hours of waiting in airport departure lounges can be hell for weary travellers, which is why two Russian architects have come up with a novel snooze pod that can be rented by the hour. Pretty cool stuff, actually. By MANDY DE WAAL.

If you’ve ever had a connecting flight delayed at Heathrow, you’ve experienced the horror of having to wait, heavy eyed, in the airport departure lounge for hour after mind-numbing hour. Unsurprisingly there are many economy class travellers, without the luxury of corporate credit cards, who’d readily state that airport departure lounges are the seventh circle of Hades.

Moscow natives Alexey Goryainov and Mikhail Krymov were feeling the pain of a global recession that had cut into their architectural practice, when they decided to travel and experience that particular purgatory that is the airport wait.

But instead of shifting restlessly on hard plastic chairs the duo decided to put their down time to good use and came up with a simple yet revolutionary idea begs the question: “Hell. Now why didn’t I think of that?”

It’s called Sleepbox, a sci-fi type pod-cum-walk-in-bunk that can be rented by the hour. “A couple of years ago when the financial crisis broke we didn’t have that much commercial work, and were travelling a lot and spending time in airports,” says Krymov, speaking to Daily Maverick from Moscow.

“The worst time to travel is the Christmas season when there are major delays and this made us think about what we could come up with to solve this problem. We developed a concept for discussion, and after showing it we got orders that were much more intense (voluminous) than we expected. Basically what we were showing the world was how to make cheap hotels from boxes,” says Krymov.

When the duo got back to Moscow they started building their prototype, which has now been installed at the Sheremetyevo International Airport, one of the biggest and busiest airports in Russia. Krymov says the demand for the Sleepbox is growing by the day, and currently the innovators are set to manufacture some 100 pods a month.

The boon about the Sleepbox is that you can have an hour, or two, or more shut-eye for about $10 an hour without having to worry about whether your luggage is safe or not. A relatively small, square facility the snooze pod measures 2m by 1.4m, and about 2.3m tall, with just enough space to fit two or three bunk beds and space to store luggage. Each pod is ventilated, has power and Internet connections so there’s the option of relaxing or working in privacy. The unit is automated so when people leave bed linen is automatically changed and the pod is ready and waiting for the next customer.

“We’re hoping that more airports will appear (become our clients) in the new year, and the main interest is from Europe and Asia,” says Krymov, who adds that the Sleepbox will be found in Spain and the UK next year.

“The smallest units are for hotels or airports, but we are taking orders for hostels. Generally the Sleepbox takes one person in a booth, but we can make the Sleepbox for two or three persons. The unit is normally placed indoors, but we can also make a Sleepbox for the outdoors if the climate is not too cold,” he says.

“We suggest customers create a reception which can be manned or act like an auto-sale that takes plastic cards and gives out keys. The units are not that big so they can easily be placed in different corners of airport terminals.”

Krymov says the Sleepbox is not just for airports, but very useful at train stations, and even hotels are interested. Krymov adds that the Sleepbox could also be used in-company for people who work long hours and need to nap, or need to overnight of shifts. “The basic model has ventilation, beds, mattresses, windows and a light for reading. There are computer and telephone connections so you have everything you need to sleep, work and to recharge your phone and computer. The booth is all made of soundproof material, and the windows become opaque at the touch of a button for privacy,” he says.

Obviously each unit can be locked, and the architects aren’t just stopping at an economy model. They have their eye on more upmarket models for more demanding travellers.

“We are looking at putting different quality Sleepboxes at different venues. If you want to start a cheap hostel, you don’t need a television or an intercom, but obviously booths at airports will need intercoms and a level of security and comfort. It is like cars, there is a basic model and option and then it becomes more and more luxurious, but costs more,” says Krymov.

The pair, still in their twenties, haven’t quit their day jobs as architects just yet, but have received investment and the backing to take their Sleepbox business global. These snooze pods aren’t a first, as the Japanese have long cracked the concept of capsule-type hotels. But Krymov says if he has his way, they’ll be the first rest pods to fly for people-on-the-go who need a quick half-an-hour or a full eight hours sleep. DM