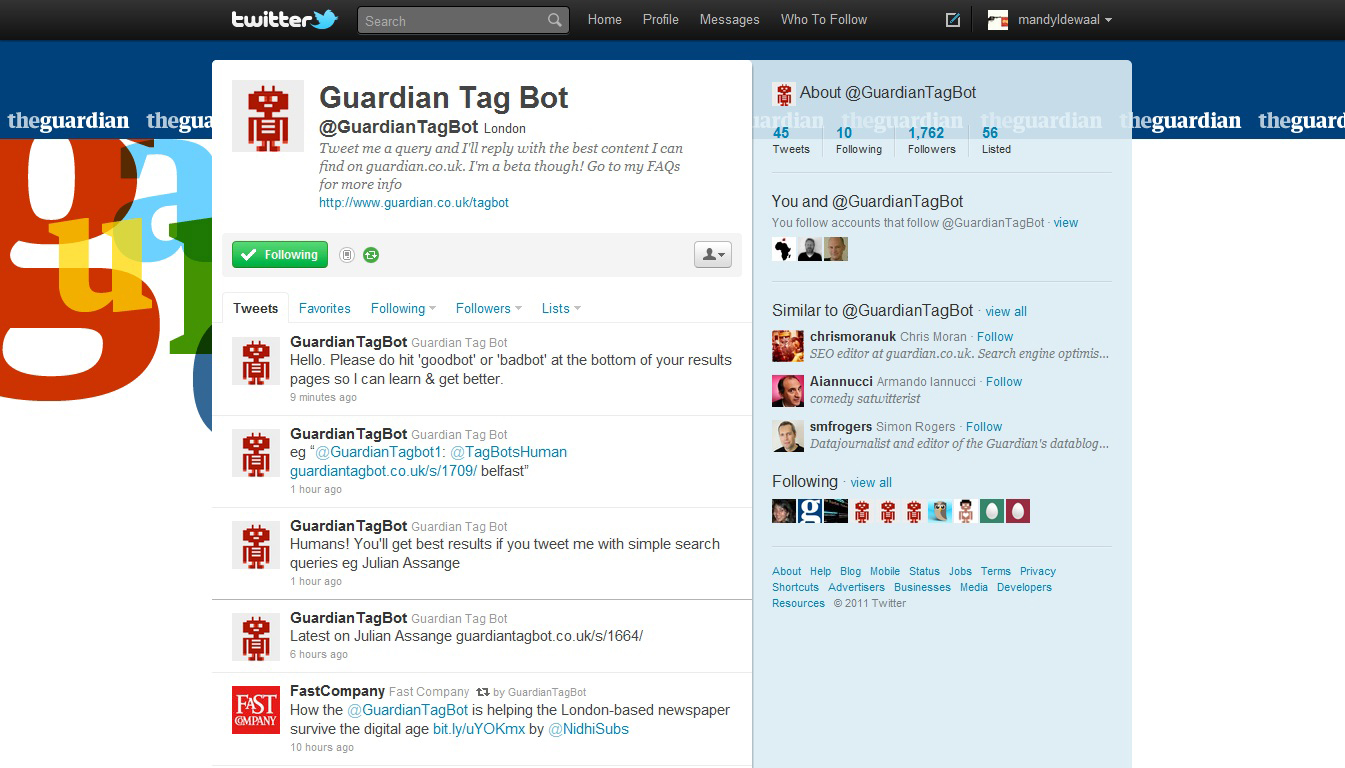 Readers of guardian.co.uk, one of the most popular English news sites in the world, can now tell a twitter bot to go and “fetch” content. As the Guardian continues to eschew paywalls in favour of an open, digital-first approach, innovative social media tools are crucial to buoying readership and hopefully driving revenues. By MANDY DE WAAL.

Britain’s favourite online newspaper, The Guardian, strides deeper into being a “digital-first” news organisation with the launch of @GuardianTagBot, which is like a Twitter-based Labrador that plays “go fetch” with the guardian.co.uk’s content.

Still in beta format and dead easy to use, if you’re a journalist, researcher, avid reader or just curious and want to find content at The Guardian, all that needs doing is firing a phrase with key words in Twitter using the @GuardianTagBot tag.

Daily Maverick’s query for the keywords “daily ipad newspaper tablet” got a rapid response detailing stories on Rupert Murdoch’s The Daily which now has 80,000 subscribers. About a second after asking the bot to go fetch content on “Jacob Zuma” and “Julius Malema”, it was evident that at The Guardian, Zuma held court with more content than the ANCYL leader.

“@GuardianTagBot is a Twitter account set up for our content API robot, TagBot. If you tweet it with a search term on your phone or online, it will then send you a link to our latest coverage that best matches what you were looking for,” says Nina Lovelace, content development manager at The Guardian. “It’s rather like playing fetch with our articles, videos, galleries and audio,” she writes in the Inside The Guardian Blog introducing the new service.

There’s no limit to how many searches can be done, but this bot does have a bit of an attitude. “TagBot’s batteries are only so powerful, so after responding to around 3,000 queries a day it will fall asleep,” Lovelace writes. “The best way to know when this is happened is to follow @GuardianTagBot which will tweet status updates and let you know when it is dozing, as well as any news on new tags, and any interesting tag-related content it thinks everyone should know about.” Lovelace came up with the idea for the bot, which was developed in conjunction with boutique London social media agency Smesh, which builds cool tools that help brands “rule” the interwebs. Tom Quick who calls himself “Herr Kapitän” (aka the founder of Smesh) says the tagbot is really a Twitter-based gateway into the Guardian’s application programming interface API.

“The tagbot is a handy shortcut into the Guardian’s rich content ecosystem,” Quick writes in the Smesh blog. “It also helps the Guardian investigate new content services for users, as well as a new way to show potential commercial clients just what its API can do.” The service had no sooner launched than it crashed, or rather went to “sleep”, because of the surge of queries which elicited a tough response from Twitter, ever vigilant against automated spam services.

Guardian’s digital focus appears to be paying off in reader numbers. Year-on-year growth for the network (including MediaGuardian.co.uk) shows that Guardian.co.uk is up 44.78%. From a revenue perspective, Guardian’s digital operation now contributes some 15 to 18% or more of the media company’s revenues, which like all newspaper businesses invested in print, has taken a knock from declining press profits.

In August, Guardian Media Group (owners of Guardian News Media) reported revenues of £255.1 million for the year ending 2011, down from £280 million in 2010 and £310.9 million in 2009. Unlike press in Murdoch’s News Corp which have opted for paywalls to drive revenues, Guardian has championed an open journalism approach.

“The Guardian’s digital expansion and journalistic success has been underpinned by its open approach to publishing on the web,” the news company’s CEO of operations said in the announcement of Guardian’s recent financial results. “While GNM (Guardian News Media) continues to have an open mind about the principle of charging for editorial content on the fixed internet, there is no evidence to date of a paywall model that would be either commercially or editorially attractive to the Guardian.”

The loss-making organisation, which lost £33 million this past financial year, has made open journalism the core of its strategy, with Miller predicting that revenues for digital will bring in £100 million by 2016. However digital revenues have yet to cover print costs. “Digital revenues, while growing steadily, do not fully offset declining print revenues,” said Miller, declaring that the operation could run out of money in about five years if it wasn’t able to produce better digital revenues or save more money.

Guardian has achieved growing readership in the US, and media companies will be eagerly watching to see how it enters this market this year, without major cash reserves, and whether the group’s open and digital-first approach will yield increasing revenues from that market. DM