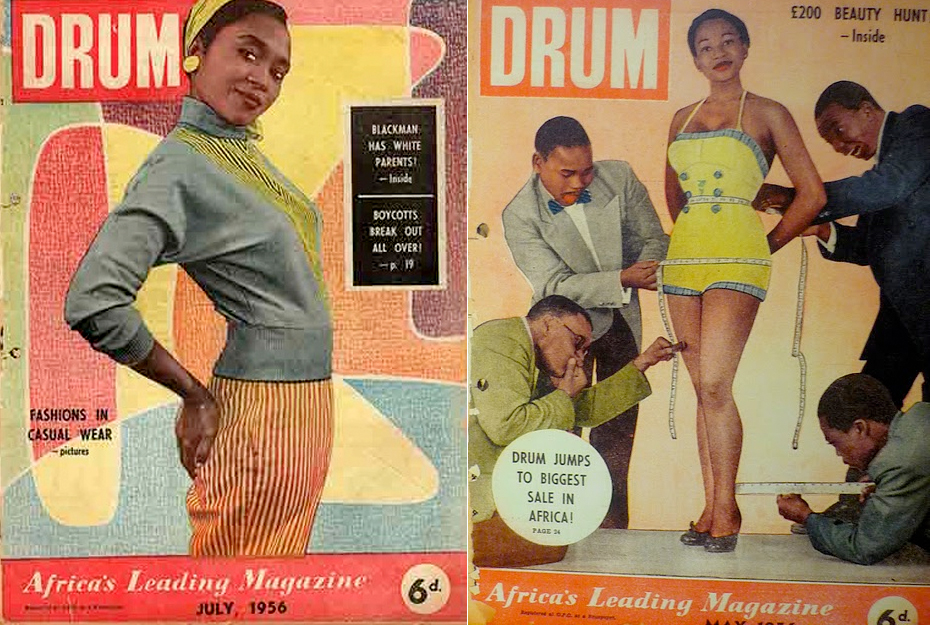 These days, Drum is a different beast from its 1950s heyday under Jim Bailey – the magazine enters its 60s as a sister publication to Huisgenoot and You. While current owners Media24 are planning a big birthday later this month, and a commemorative edition will be released in November, the real story of Drum magazine is the one that happened in 1950s. J BROOKS SPECTOR looks back on the magazine's glory days.

In its heyday in the 1950s, Drum magazine was unique. It was both arbiter and mirror of the evolving tastes – of the urban, polyglot society taking hold in post-war Johannesburg. It was also a vehicle for crusading journalistic exposés, an exultation of an emerging celebrity culture, a space for black literature to reach a large continental audience, and some reasonably modest “cheese cake”. And it conveyed all of this with a right-in-your-face English that owed much to the dialogue of cinema noir detective stories.

Drum was fun to read and audiences in South Africa – and later throughout the continent – responded by turning it into a must-have. Time magazine could write in 1952: “In the teeming Negro and coloured shantytowns of Johannesburg, where newspapers and magazines are a rarity, a truck piled high with magazines rumbled through the unpaved streets last week. Wherever it stopped, hundreds of people swarmed about it, buying the magazine…”

Founded by broadcaster and test cricketer Bob Crisp, it was then purchased by World War II pilot hero and scion of a Randlord family, Jim Bailey, who thought the magazine could strike it rich by telling the longed-for tales of the Africa of villages and homesteads in far-off rural homelands to homesick urban dwellers. But that was not what Bailey’s would-be readers wanted to know about. As an editor, Crisp was quickly replaced by the young British journalist, Anthony Sampson, who wrote of his experiences at “Drum”: “Most of the new Johannesburgers I encountered had embraced the big city with gusto, to become more eagerly urbanised than most Afrikaners. The tens of thousands who had arrived during and after the Second World War had to live on their wits or go under, and they faced constant battles – to travel to town, to survive in the streets, to earn extra money or to outwit the police.”

Particularly emblematic of this “Drum” culture was the texture of life in Sophiatown. One famous example of the type was the photographic short story, “Baby Come Duze”, written by Can Themba and illustrated by photographer Gopal Naransamy, using the evocative tsotsi taal/fly taal/isicamto patois so much a part of Sophiatown. “Baby Come Duze” has a streetwise snappy dresser trying his luck with an attractive young woman – ending with the following exchange:

Or, in breathless English for the rest of us…

Ellen: If it’s a boy, he’ll cause trouble among the little girls just like his father. And he’ll grumble that her mother stares him off whilst he’s still making love.

Contemporary witnesses often spoke of the crowding and degradation that was Sophiatown, but there was also an energy and optimism due to the unusual legal circumstances that Sophiatown’s residents could buy freehold ownership of its housing stands. Accordingly, its inhabitants had the “luxury” to believe in the possibilities of a freer, more just, urban future. Sophiatown’s cosmopolitan nature also meant that political meetings and initiatives could transcend the apartheid political universe. Indian, Coloured, African – and white – political activists often appeared at the same rallies, or competed for the same followers. And Drum covered it all. Drum fit this aesthetic perfectly, according to its enthusiastic readers. Its investigative reporting of prisoner abuse or farm workers outside Bethal; its township photographic cheesecake; and its Runyonesque fiction were all harbingers of a journalism that would come to the fore in the future. In fact, the story of Drum itself eventually became the background for the famous 1980s theatre piece, “Sophiatown”, that described a chaste cross-racial romance between a white woman and one of Drum’s star writers, as well as a Hollywood film and numerous documentaries.

Drum brought together – or perhaps attracted them like moths to a flame – a whole group of young writers and photographers, and would-be writers and photographers, who became the exemplars of their crafts for generations to follow. Photography was an especially important component of Drum’s success, especially because it was an easily accessible means to document protest action, even as it appealed to a lightly literate readership. Over time, extraordinary photographers like German immigrant Jurgen Schadeberg, Bob Gosani, Peter Magubane, Ernest Cole, Alf Khumalo and others joined the staff. Sometimes, Drum photographers had to come up with artful ruses to get their stories without also receiving the wrath of white officials and the confiscation of their equipment. In one famous example, Gosani and Arthur Maimane posed as white secretary Deborah Duncan’s helpers to get the photographs that convincingly illustrated Henry Nxumalo’s (nicknamed by the public as Mr Drum) first-hand account of prison conditions.

Of the iconic photographs that illustrate this era – the young Nelson Mandela in a smart suit and determination on a still-smiling face, Dolly Rathebe in a two-piece swim suit on what seems to be a beachside dune (although is actually a mine dump), Miriam Makeba in a skin-tight dress designed by Eduan Naude – all were famously in Drum before becoming fashion statements in today’s Stoned Cherrie clothing range.

Besides Nxumalo, Nat Nakasa, Casey Motsisi, Themba and Maimane; writers in the Drum stable included Peter Abrahams, Alex la Guma, Es’kia Mphahlele, Lewis Nkosi, Todd Matshikiza, and Richard Rive. All wrote stories that drew upon satire and irony in their depictions of Black South African life and they went on to further international recognition after their Drum moments.

Besides being the composer who created the musical “King Kong”, Todd Matshikiza became Drum’s music reviewer. Nakasa established the literary magazine, “The Classic”, and won a Nieman Fellowship to study journalism in the US, but had to leave South Africa on a one-way exit permit. Unable to return home, he eventually took his own life in desperate sadness. Works like Themba’s “The Suit”, and Mphahlele’s “The Suitcase” have become contemporary standards, also generating award-winning plays, dance works and musicals that glance back to Drum from today’s very different society.

At Drum, aspiring journalists and photographers received the kind of hands-on experience that became known as the “Drum school” from its editors Anthony Sampson and Sylvester Stein, and their colleagues. Looking back upon his time with the magazine, award-winning photojournalist Peter Magubane could say: “Drum was a different home; it did not have apartheid. There was no discrimination in the offices of Drum magazine. It was only when you left Drum and entered the world outside of the main door that you knew you were in apartheid-land. But while you were inside Drum magazine, everyone there was a family.” And Schadeberg could recall that “Sylvester [Stein] was the best editor that Drum ever had and some of the most exciting and valuable stories were produced under his editorship: such as the Church story, the Treason Trial, etc.”.

Eventually, Drum began to run out of energy, its West and East African editions atrophied away, and the editors wearied of fighting censorship battles with apartheid-era government and police. The magazine became a monthly supplement to another of Bailey’s publications, and in 1984 it was sold off to Naspers – now Media 24 – although its extraordinary photographic archive remains a stand-alone institution. Drum continues on – although it is now more like an African-oriented version of a home and features magazine like Huisgenoot and You than the crusading, quirky, phenomenon of its youth. But it continues. Its first issue hit the newsstands in March 1951; the publishers now plan a celebrity-studded 60th anniversary commemorative celebration in late October to mark its legendary impact. DM