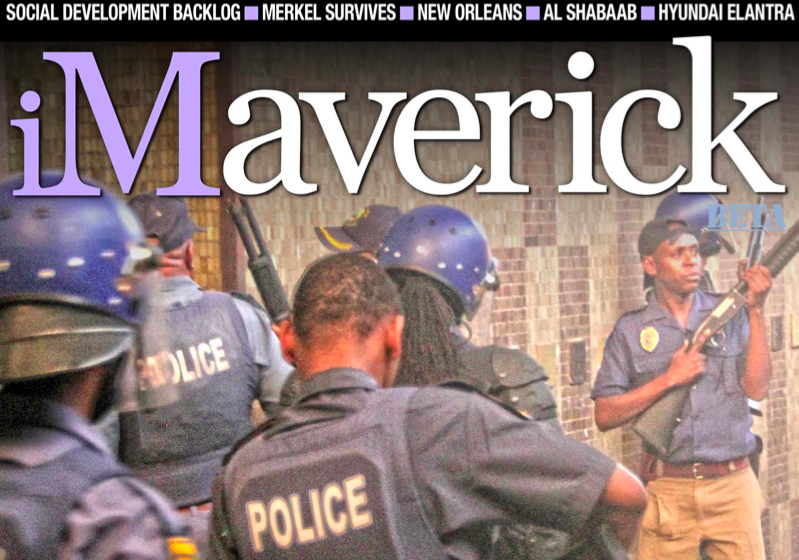 The now permanently-evacuated former residents of Schubart Park on Thursday turned to the Constitutional Court, asking it to return them home. That won’t happen. But the highest court in the land probably will hear their plea, and may end up setting a hugely important precedent affecting many other communities. The political problem of an evacuation by force, though, that’ll be somebody else’s problem. By PHILLIP DE WET.

Impoverished, chronically ill South Africans are falling through a “massive hole” in the social welfare net, says civic organisation Black Sash, and government is failing these people by not dealing with a massive backlog in social grants. As many as 40,000 people with illnesses like HIV, TB and similar debilitating conditions, who are need money to survive and for transport to treatment clinics, could be left destitute. By MANDY DE WAAL.

Long legal cross-examinations have something of the five-day cricket test to them. There’s moments of drama, followed by periods of calm, the sheer horror of the question that looks like a catch but is dropped, followed by hours in which nothing happens. But it’s the times in which nothing happens that turn out to be the most important. This was the scene at day four of the Health Professions Council hearings into the conduct of Dr Wouter Basson. The council’s investigating whether Basson can be stopped from practicing as a doctor due to the fact he led the apartheid government’s biological warfare programme. STEPHEN GROOTES is in the Castle Stand.

With a growing number of matters of national interest on President Zuma’s desk, the least the public expect is a public statement which comes directly from the president – and not a spokesman.

Zambia’s new president is already shaking things up. He’s changed the names of the airports, he’s investigating possible campaign fraud and now he’s appointed a vice-president. Nothing too special about that, except for the remarkable fact that the new VP is white. By SIMON ALLISON.

MSWATI SHOWS SA THE DANGERS OF BLURRING THE LINES BETWEEN JUDGES

Lawyers are on strike, the public have no confidence in the legal system and King Mswati III has just got away with firing a judge who dared to criticise him. Anger for the chaos in Swaziland’s judiciary is directed at the chief justice, who’s seen as a spineless stooge. South Africa must heed what happens when the line between judges and political appointees blurs. By SIMON ALLISON.

Today an unusual ceremony takes place in Berlin. The skulls of 20 indigenous Namibians killed between 1904 and 1908 will be returned by German scientists to a Namibian delegation. By REBECCA DAVIS.

As if banning samoosas wasn’t enough (they’re too Christian, apparently), Al Shabaab has gone one further and summarily changed the script of the Somali language from Latin to Arabic, giving businessmen just weeks to put up new shop front signs. Language is inextricably linked with beliefs and ideology, and whoever controls language effectively controls people too. This is the terrorist group’s goal. By SIMON ALLISON.

On Thursday, Brand South Africa and the Brand Leadership Academy hosted this year’s edition of the Brand Africa Forum, which was established to “proactively drive Africa’s reputation, image and competitiveness”. By KHADIJA PATEL.

If it goes ahead, it’ll be the second high-profile execution in a month: an Iranian pastor faces death by hanging for the crime of “apostasy”. That means the renunciation of a religion – in this case, turning one’s back on Islam. By REBECCA DAVIS.

BRAZIL’S ALREADY COUNTING THE COSTS OF THE CUP

Listen up, tenderpreneurs. In 2014 Brazil is hosting a little event called the Fifa World Cup, and it’s spending whatever it takes to be ready. By GREG NICOLSON.

Germany’s Parliament had the opportunity to scuttle Europe on Thursday when it voted on Chancellor Angela Merkel’s plan for a stronger euro bailout fund. They took one, long hard look over the abyss – and uncharacteristically backed Merkel. Had the vote gone against the chancellor, not only would she have followed other politicians with bold regional plans that were punctured by home politics, but Greece would have probably found itself with default as the only option left on the table. Who knows what would have happened to Europe after that? Merkel, along with every nervous market watcher, will sleep just a little easier now. By SIPHO HLONGWANE.

Up until very recently, the idea that the 27-nation European Union might come unstuck was virtually unthinkable. It had been one of the great post-World War II successes in economic and political integration. Now, however, two of the EU’s most important achievements – its common currency and the free movement of people across borders – are under threat. By J BROOKS SPECTOR.

FLEE FOR THE AFRICAN HILLS – GORDHAN

South African firms need to look to Africa for some euro debt relief, and nobody should exclude themselves from helping Europe out, said South Africa’s finance minister Pravin Gordhan after his meeting with other financial leaders in Washington. By SIPHO HLONGWANE.

In the mountains of Oregon, there’s a high school with a difference. One thing that sets Delphian School apart is its price-tag: $42,000 a year. But another is the fact that Delphian’s aim is to instruct its pupils in the teachings of Scientology. By REBECCA DAVIS.

BE A REVOLUTIONARY: READ A BOOK

This week is Banned Books Week in the US, an attempt to draw attention to the ongoing problem of censorship in the country and elsewhere. Since 1982 authorities have attempted to ban more than 11,000 books in the US. By REBECCA DAVIS.

Nissan is planning to create a car that can predict the driver’s intentions and prepare the car accordingly. Apparently it’s all in aid of safer driving. By SIPHO HLONGWANE.

It’s known as the home of American music, the city where the African drums of homesick slaves met the operas of privileged Europeans to forge a sound that’s now unparalleled anywhere on Earth. But does New Orleans still have the charm and allure it held in the years before Hurricane Katrina? KEVIN BLOOM considers the question.

HYUNDAI ELANTRA: FROM ODDBALL TO EXCELLENCE

Not that long ago, at least in automotive terms, the only praise the Hyundai brand – and the Elantra in particular – might have attracted would have recognised its value-centred virtues. But things change and, as the latest Elantra proves, sometimes for the better. By DEON SCHOEMAN.

LAMENT OF A SOUTH AFRICAN SOCCER FAN: ‘DO YOU REALLY WANT TO HURT ME?’

The national soccer team is in familiar, unpleasant territory. To qualify for next year’s Afcon tournament, they now rely on favourable results for other countries. PAUL BERKOWITZ and SIPHO HLONGWANE rage against this sad state of affairs.

Samoa have it all to play for as they face off against South Africa in their final Pool D clash in Auckland on Friday. By PLANETRUGBY.COM.

DAVE WARNER – MATURING AS A BATSMAN ave Warner – matu
Back in Australia’s ODI squad after more than a two-year hiatus, David Warner has insisted that he is a more level-headed batsman than the cavalier, gung-ho character that impressed and then gradually petered out across the remainder of the year. By Cricket365.com