No Jolly Rogers at African seminar on piracy 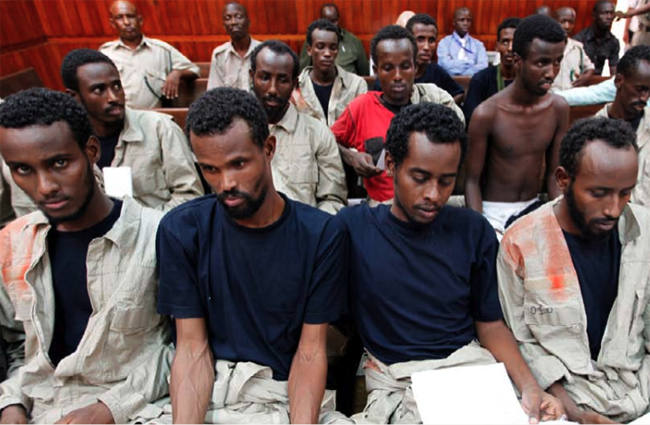 The pirate seminar, organised by the Institute for Security Studies in Pretoria, was a sober affair. Although there were a few naval uniforms, and one truly magnificent moustache, there were no peg-legs or parrots, and not an eye-patch to be seen. It seems that when admirals, captains, policy wonks and defence consultants meet to talk about piracy, they treat it with the gravity the issue deserves. By SIMON ALLISON.

It’s a serious problem. Estimates vary, but piracy in East Africa, almost exclusively based in one region of Somalia, costs between $7 to $12 billion a year in ransoms, security presence, increased insurance premiums and re-routing costs. That money isn’t paid by shipping companies, businesses or governments, but is passed along to consumers in the form of higher prices for food, fuel and goods. And unless something changes in how piracy is dealt with, things are only likely to get more expensive.

Piracy in Somalia started out of frustration. Most of them were fishermen who couldn’t compete with illegal trawlers which would raid their fishing grounds, or with the boats which took advantage of Somalia’s lawlessness to dump toxic waste in their territorial waters, badly damaging fishing prospects. So the fishermen took matters into their own hands and started exacting their own informal levies on any boats straying into Somali waters, enforced with the threat of violence. Soon others joined in, attracted by this apparently easy money – made easier by the fact that there’s no institution in Somalia strong enough to do anything about it – and a thriving industry was born.

The waters around Somalia were initially excellent hunting grounds for pirates, as a relatively narrow channel between Somalia and Yemen doesn’t give ships much room to manoeuvre. Security there has been tightened significantly in the last few years after the introduction of an international naval force, which has instituted a “safe corridor”, constantly patrolled and through which ships can pass in relative safety. But the safe corridor ends once the ships get through the danger zone and scatter in every direction. It’s here they’re vulnerable again, as the Indian Ocean is simply too big to guard. With the minimal naval force present, it would be like trying to enforce traffic control in the continental US with 35 scooters, commented one panellist at the ISS seminar on piracy and maritime security. And Somali pirates get bolder and bolder, straying further from their coastline. One pirate attack was measured at 1,300 nautical kilometres from the Somali coast. Their tactics have evolved too. Sometimes they’ll pirate a small vessel such as a trading dhow or small merchant vessel, and use that as a mothership to pirate a larger vessel.

Unfortunately, there’s not a lot the international community can do about it. Piracy is such an attractive career option in Somalia (one pirate’s $10,000 pay-off from one job is equivalent to two-thirds of a Somali’s expected lifetime income), that even if all 5,000 working pirates were arrested today, there’d be thousands more ready to replace them tomorrow. Paradoxically, piracy can’t be solved at sea. It must be addressed on shore by providing decent alternative career options and a government that can enforce its own regulations. This is easier said than done in the failed state that is Somalia, although a good start might be to bolster or at least engage with semi-autonomous states such as Somaliland and Puntland.

Failing this, only the symptoms can be addressed, and even that’s difficult. Putting armed guards on ships is very effective, but also prohibitively expensive and fraught with legal and practical difficulties. Egypt, for example, won’t allow guards to transit through their country with arms and ammunition, making it difficult to arrange their logistics. Sending more ships to the area is costly and politically unfeasible; no one wants to commit more of their navy to wander up and down the Red Sea, and anyway, unless warships are empowered to go after pirates in their bases, it can’t be that effective.

A more viable option is to re-route ships, which some shipping companies are already doing. If this practice became prevalent, it would be great news for South Africa, as this means far more sea traffic rounding the Cape of Good Hope and paying the associated fees. But it would be bad news for the global economy as it would push up the prices of anything transported by sea. It would be especially bad for the Indian Ocean ports of Mombasa and Dar es Salaam, which might see business dry up completely.

South Africa, though, does have reason to worry. The slow but steady increase in West African piracy is a growing threat, as is the potential for Somali piracy to spread further south. Preventative action is needed, especially in Mozambique which shares Somalia’s problematic combination of long coastline and weak government. Now’s the time to sort out the economic issues which encourage piracy before it’s too late.

But there’s unlikely to be political will for this. In fact, a general lack of political will makes it very difficult to deal effectively with the pirate threat. Even though every country in the world can and does agree that piracy is a bad thing, there’s a reluctance on the part of politicians to commit resources to address a problem that seems so far away, a problem which impacts only commercial interests anyway.

And commercial interests aren’t trying too hard to mobilise political will because, at the end of the day, the damage caused by piracy represents but a tiny fraction of the total shipping industry, and any increased costs can be passed on to the consumer. So, in the end, it’s the people that end up paying as Somalia’s modern-day buccaneers continue to wreak havoc on the high seas. DM

Note: Under ISS rules, journalists are free to use all information gathered during a seminar, but cannot attribute statements to specific participants.