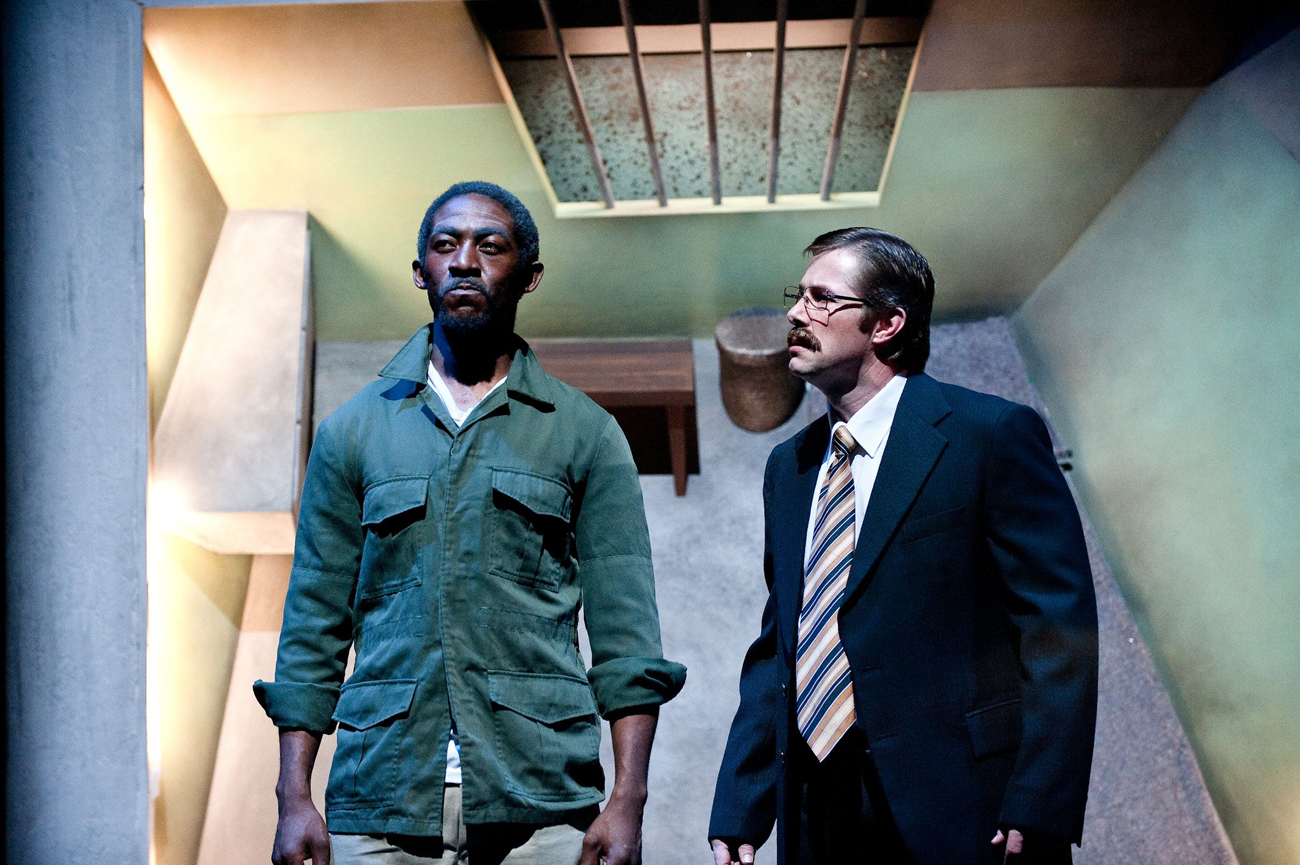 Nelson Mandela is such an icon that not fully endorsing anything connected to him feels like an act of treason. How then, do you review a musical tribute to his life without being sycophantically nice in reverence, or lynched for daring to point out weaknesses?  By LESLEY STONES.

I guess you just dive right in and say it – the “Mandela Trilogy” is a great piece of theatre, but with too much of a Hollywood happy ending.

Mandela’s life story is perfect stage material, because this rags-to-riches tale has so much more heartache, troubles and triumph than perhaps any other story in the world. So doing it justice is always going to be a problem. And with so many events, political changes, personal tragedies and public upheavals to choose from, defining the core script must have been immensely tough. Philisa Sibeko and Aubrey Lodewyk as Winnie and Madiba

Writer Michael Williams has dramatised what he believes were the defining moments of Mandela’s life, and he succeeds very well. It’s a large-scale opera with other styles of music mixed in, with highlights being the Sophiatown scene and some poignant moments in jail when the prisoners reflect on their lives and the difficult choices they made.

It’s staged by Cape Town Opera and the KwaZulu-Natal Philharmonic Orchestra, with the welcome addition of subtitles to ensure the audience doesn’t miss a word, be it in English or Xhosa. Thato Machona as the young Mandela

The costumes are gorgeous, the singing by the 40-member cast is flawless and at times the choral effects are glorious. Although there are no truly memorable songs, musicians Allan Stephenson, Mike Campbell and Peter Louis van Dijk have done a great job in taking the complex ideas in the lyrics and setting them to music.

The brightest stars in the cast are Gloria Bosman as “Dolly” the shebeen queen, Tina Mene as Mandela’s mother and Xolela Sixaba, who impresses as the village chief. Williams has crafted the script around three Mandelas – the young boy, the womanising activist, and the wise old man. An early scene sets the tone by showing Mandela the boy (Thato Machona) in his village where the elders despair that their children will never achieve their potential in this oppressed land.

Aubrey Poo plays Mandela as an adult, and the lyrics don’t fall shy in presenting him as a womaniser, an idealist and probably a very difficult man to live with. Mandela as a prisoner is played by Aubrey Lodewyk, and both Poo and Lodewyk capture his voice and his aura of stature and statesmanship beautifully. Williams as the writer isn’t afraid to show Mandela as a man with doubts and foibles, and the actors portray his beliefs, anguish and regrets so well that at the end the audience was applauding as if Mandela himself had walked on stage.

So, then, my only gripe is that the depth and brutality of the struggle seem glossed over. There’s a very short scene of student uprisings in Soweto, and I was surprised it didn’t end in police brutality. This is a sanitised version of history, and although that doesn’t belittle the struggle, it does make it seem that peace and reconciliation were easily achieved. Perhaps that doesn’t matter for local audiences who know the truth, but as a show that’s bound to go international I wanted it to have more bite.

When the unbearable but inevitable happens and Mandela departs, this opera will no doubt be revived to help the whole world mourn. It ends with the cast lined up on stage singing “We are one”.  Ah, one can always hope though. DM