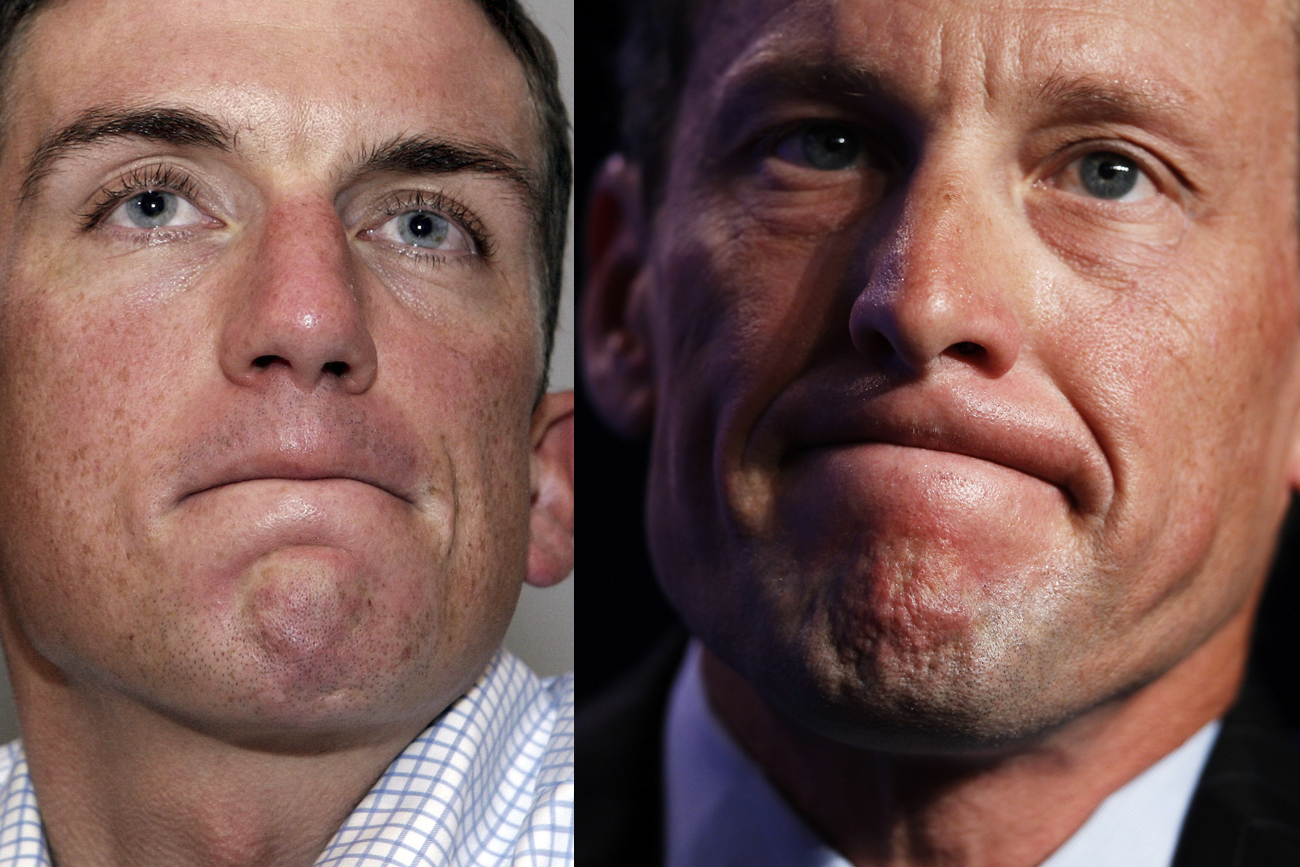 It had all the makings of a Wild West showdown. For one thing, it occurred in the Wild West. (Or Boulder, Colorado, which is not quite wild, but is west.) For another, it took place in a bar. Tyler Hamilton, the one-time Olympic Gold Medallist who recently spoke to “60 Minutes” about cycling’s doping plague, met his Voldemort—Lance Armstrong—while out for dinner. No one less than the FBI is interested in what they had to say. By RICHARD POPLAK.

We are locked in a War On Terror, and a War On Drugs. Also, there is a War On Lance Armstrong. How else to explain the odd trajectory of what must surely be one of the most awkward social interactions in the history of humankind? Last Saturday night, Tyler Hamilton—who a month ago appeared on”60 Minutes” and came clean about his use of performance-enhancing drugs during his professional cycling career—encountered Lance Armstrong at an upscale bistro called Cache Cache. (Pronounced “Cash Cash,” don’t you know? A recent review calls the vibe “unpleasantly self important.”)

Cache Cache happens to be where Lance Armstrong dines three times a week. (He owns a home in Aspen, and lives there with his girlfriend and two young children.) Armstrong rated a mention or two on Hamilton’s “60 Minutes” appearance last month, and not in a good way. “[Armstrong] took what we all took…the majority of the peloton,” Hamilton told “60 Minutes”. “There was EPO [eryhropoeitin, which stimulates red blood cell growth]…testosterone…a blood transfusion. I saw [EPO] in his refrigerator…I saw him inject it more than one time like we all did, like I did many, many times.”

Armstrong’s entourage of legal and business advisors came down hard on the Hamilton confession, insisting that his claims were made to enhance his profile, and get a publishing deal for the inevitable book he has written. They demanded an apology; CBS told them to take a hike. If Hamilton was the only person claiming that Lance had serially doped—and had indeed been an enabler for younger riders coming through the system—his testimony would be easy to dismiss. As it happens, there is a veritable legion of detractors lining up to slam Lance and his record. Hamilton is one among many.

The stakes for the seven-time Tour de France winner are very, very high. If he is found guilty of systematic doping, he doesn’t merely face censure from the IOC, UCI and other acronym-oniuous sporting bodies that hand out fines and suspensions. He was on the board of directors for both US Postal and Discovery teams, and would thus be indicted on felony fraud charges if found guilty, and face decades of hard time in a padded cell with Bernie Madoff.

Thus, all was in place for the Mexican standoff that occurred at a pricy, pretentious Aspen restaurant last weekend.

Turns out, Hamilton and his entourage—cyclists rarely travel without their lawyers, in this case one Chris Manderson—were eating at Lance’s hangout. Hamilton noticed a friend at the crowded bar, when he was either clothes-lined or gently tapped by Armstrong, who was slurping back tequilas. According to Manderson, who spoke with ESPN, “Lance Armstrong is a possible defendant in an investigation that’s been widely reported, and Tyler is a probable witness. When there’s any contact, especially aggressive contact, we as lawyers have a duty to inform the authorities. … What they will do with it, I don’t know.”

What the Feds have done is subpoena the surveillance footage from the bar, which according to Cache Cache’s owner, Jodi Lerner, doesn’t exist. “I wish it was on surveillance to show it was a non-event,” insisted Lerner. “They didn’t create a scene whatsoever. Two guys talking in a bar. If that’s an incident, wow.”

Lerner is firmly in the Lance camp—an old friend and, one presumes, a beneficiary of his largesse when it comes to imbibing enormous tequila beverages and purchasing $40 entrees. Lerner claims that there was no aggressive contact, that Lance didn’t leave his barstool, and that no voices were raised. This is a packed bar on a Saturday night in Aspen, Colorado? A first.

Was the contact aggressive? If so, it could constitute witness tampering which, as viewers of “The Sopranos” will attest, is an old mafia technique for throwing a snitch off his game and into the Hudson. According to Manderson, the meeting was not exactly salutary. Lance repeatedly asked Hamilton how much he was paid for the CBS interview, and warned him that he would be ripped apart on the witness stand. “We will make,” Lance is alleged to have said, “your life a living fucking hell.” Must have been the tequila talking.

Hamilton was apparently shaken, and his table was asked to quickly finish their coffee and dessert, and to never return to the restaurant. (Lerner claims there was a dispute with gratuities on the bill.) As with everything in the Lance legal canon, this comes down to he said/she said—without the footage showing Lance aggressively confronting Hamilton, there doesn’t seem to be much of a case. But the FBI hawks are circling, and with every small misstep, they get a little closer. It’s like an attack on the break at Tourmelet in the Tour de France: Patience … patience … then strike.

Ah, Lance. We loved you so. But it gets more sordid by the day. Soon, it will be a punch line. Indeed, according to an Outside Magazine blog, on a ride the following day, high in the Colorado Rockies, Hamilton and his peloton stopped for a picture. Asked to say something funny, they all chimed in with, “Lance”.  DM

Photo: A collage of Reuters photos.