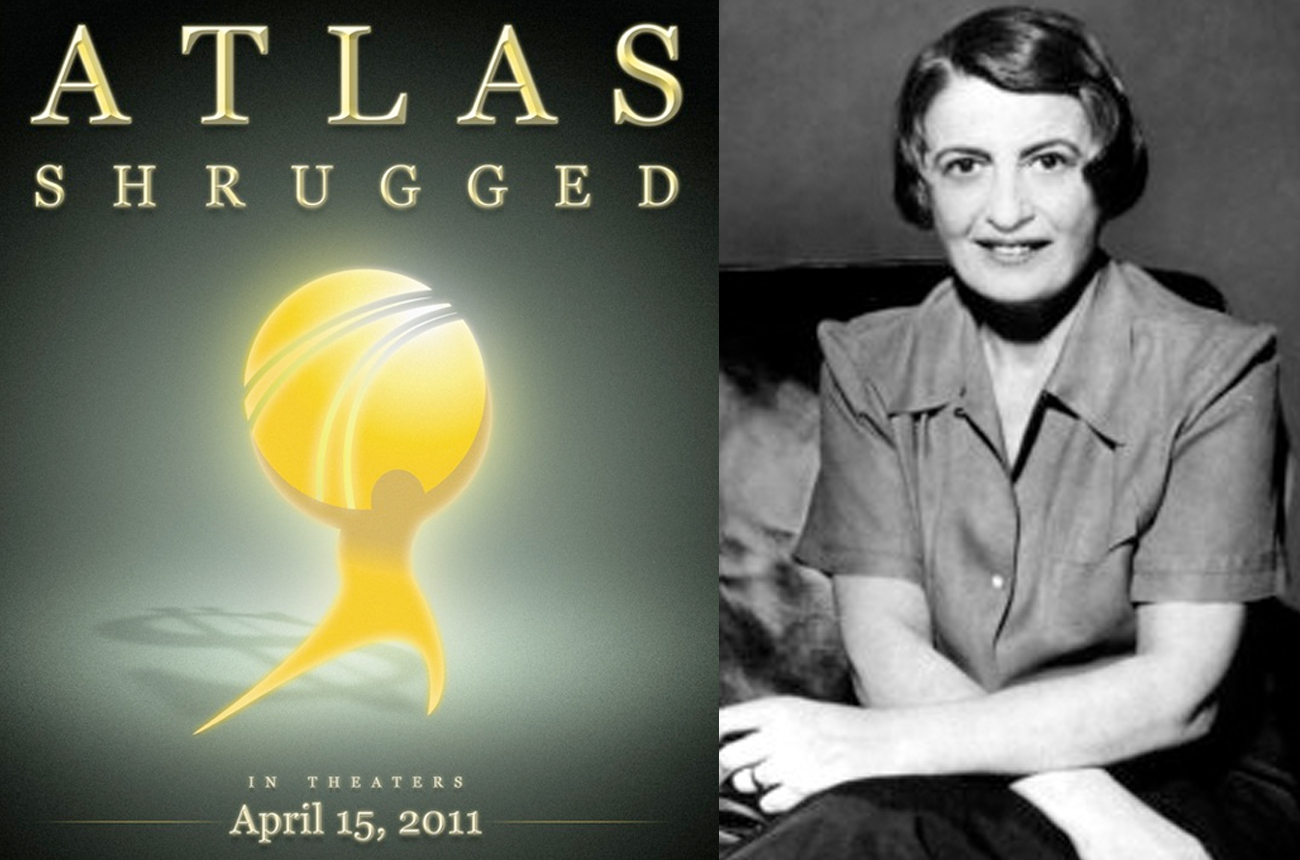 Two weeks ago, the filmed version of Ayn Rand’s divisive mega-selling 1957 novel “Atlas Shrugged” was released in the US. Made on a small budget, without the backing of Hollywood’s marketing might, the independently financed film grossed $1,675, 917 for the first week at the box office, ranking it number 14th. What’s more, this is only Part 1—implicit in the title is the threat of sequels. Predictably, the film has divided critics along political lines. The right think it’s alright. The left think it’s bereft. By RICHARD POPLAK.

I remember reading “Atlas Shrugged”, lying on a filthy mattress I shared with my girlfriend and a family of mice in a disgraceful Toronto apartment. In this context — and only in this context — Ayn Rand’s opus made a lot of sense. Suddenly, it was clear who was forcing me to room with rodents. Unions, Big Government, Collectivists, Socialists, Commie goons. Like the mysterious architect-rapist who is the book’s main thesis, by which I mean character, what I needed was to get the vampires off my neck, take the world in my hands, have rough sex with my girl, and own!

I haven’t quite gotten around to this, but then again, I’m not John Galt, the anorak-wearing sociopath who proves to the rest of the book’s tropes, by which I mean characters, that not only is self-interest good, it is the only morality worthy of the name. The main reason for my lack of Galt-ishness is that it’s just so much damned work. If I were to meet Rand in an elevator, were she still alive, she’d beat me to death with her handbag. I’m not worthy. I’m one of the useless hordes.

In the current Blue State/Red State version of the US, which is almost perfectly split between the right and the left, there are your Randians and your anti-Randians, and I’ll let you guess where they respectively fall on the political spectrum. The book has not gone out of print for so much as a minute since it was published in 1957, and has, post the film’s release last Friday, clawed its way to fourth on Amazon.com’s bestseller list, a spot normally inhabited by the decidedly anti-Randian Stieg Larson. (I’m guessing here, but Swedish folk are government teat-suckers extraordinaire, and Larson seems far to the left even by Scandinavian standards.)

I know what you’re thinking. A million-and-change doesn’t exactly make for a box office smash. But if this flick does catch on in the blogosphere, promoted by the likes of Glenn Beck (whose last mass recommendation, Julie Taymor’s Broadway show “Spiderman: Turn of the Dark”, is perhaps the most legendary disaster in the history of musical theatre) and Pam Geller, then who knows? Besides, there’s always DVD, NetFlix and iTunes. If the movie just practices some healthy self-interest, its über-capitalist credentials will power it to sleeper status, and Part D’uh will be forthcoming.

Watch the trailer for Atlas Shrugged, Part I:

There is one slight problem here, of course, and that is the fact that Hollywood studio heads, the very folks this film must battle for a slice of the ever-shrinking box office pie, make the John Galts of the world look like a pinko pussies. Talk about self-interest! Talk about targeted greed! Is “Atlas Shrugged: Part 1” kidding? If the film does show any type of legs, other than those of the fetching lead actress, Taylor Schilling as Dagny Taggart, then a studio is sure to scoop up the reference material and cast Tom Hanks as railway magnate Hank Rearden, and Beefcake de jour as John Galt.

Which brings us to the small matter of the film. I haven’t seen it yet, so this essay does not count as a review. From what I have read, however, critics who write for Rupert Murdoch give the film a grudging huzzah merely for existing, while ever so gently reproaching it for its soap-opera acting and developing-world TV production values. Liberal critics intellectually contort like preteen Chinese gymnasts to try to be fair in their flogging of the film for its ghastly filmmaking and ghastlier politics, but not because it’s based on the anti-Liberal ur-text, you understand.

It does seem like a stretch, adapting a book written in the 1950s, set in a not-so-distant future that hasn’t panned out, in any way, as Rand predicted. The Titans of Industry are hardly hamstrung by Big Government, Small Government or Any Government – all are in collusion in a way Rand could never have predicted, and probably wouldn’t have liked. Sure, the little guy still takes his government handouts, unions still exist (except in Wisconsin) and South Africa could certainly be categorised as a Nanny State, should anyone feel the need to bother. But if anything, it’s the John Galts of the world — the self-interested Objectivists — who now run the show. Their main allies? Fat-cat politicos, government hacks, the bureaucratic machine. There’s no such thing as an industry iconoclast. He has too many lobbyists on the payroll.

I don’t live with the mice anymore. My girlfriend has long since left. (No doubt because I wasn’t rough enough.) But “Atlas Shrugged” still occupies a niche in my consciousness, alongside some poorly digested Carl Jung, and some nibbled-at Wittgenstein. It’s a book that makes some powerful arguments, many of them hard to dismiss. But ultimately, it fails for its tiny worldview, it’s lack of empathy, its 10-page paragraphs and its poor characterisations. Not exactly the framework for a good film. Sound baseboard for the oxymoronic world of political philosophy. DM