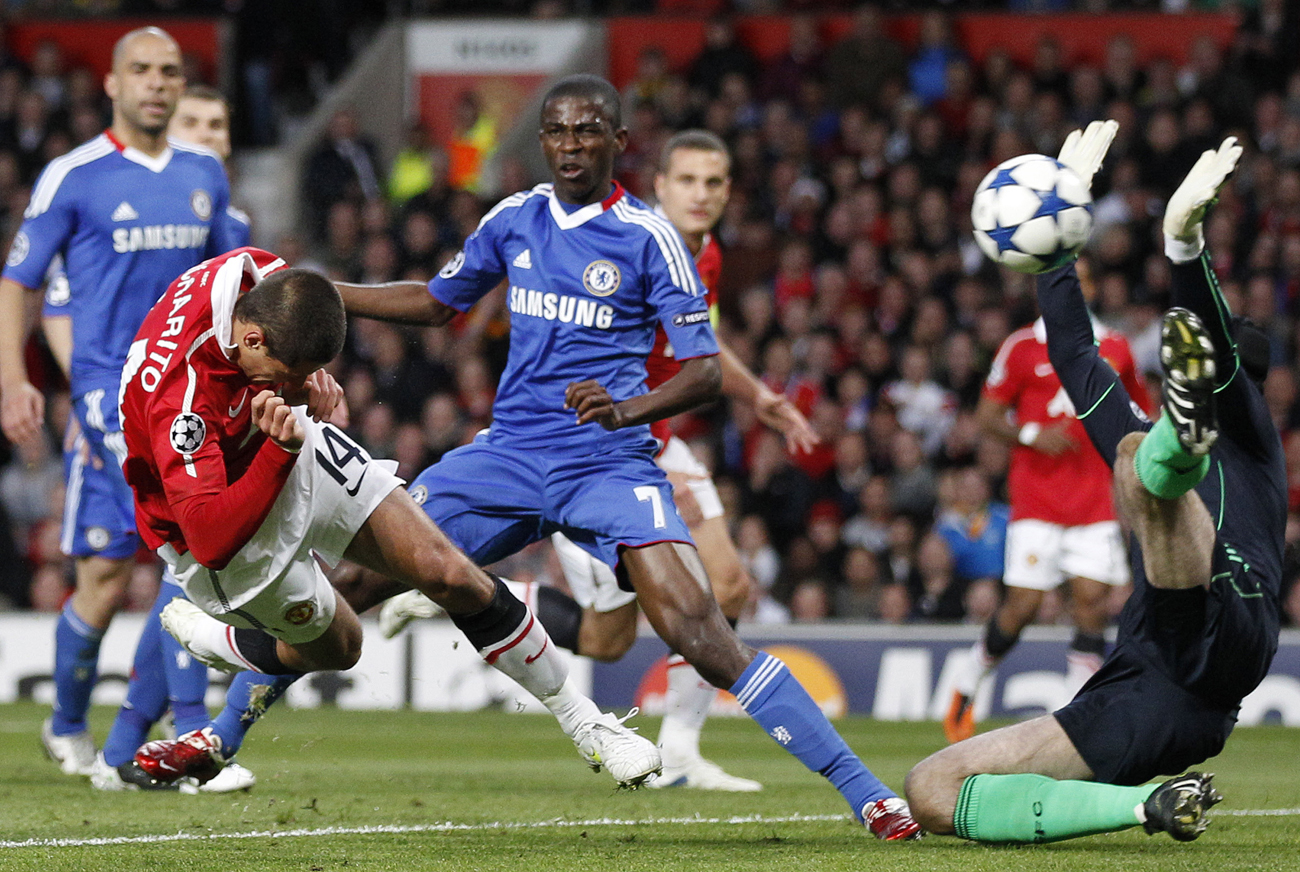 Why didn’t Didier Drogba start against Manchester United? It was a fatal tactical error, one that sent Chelsea crashing out of the Champion’s League on a 2 – 1 loss. For United it was another emphatic performance against a lacklustre opposition. Sir Alex Ferguson couldn’t have asked for a more pliant side to play in such an important quarter-final. By SIPHO HLONGWANE.

The story of Chelsea in this match was written on Salomon Kalou’s face when he came on in the second half in place of Nikolas Anelka. He looked dreadfully unhappy, as if he’d been roused from a delicious slumber to put out a neighbour’s fire. Chelsea’s players didn’t look very happy when they were playing and it translated into a half-hearted performance, especially in the first half.

The fly in the ointment was definitely Fernando Torres. Anelka, Kalou and Malouda clearly don’t like playing with him in the team and would prefer to be supporting Drogba. Torres is yet to score for Chelsea despite his ?50 million price tag and the sour pallor at Stamford Bridge is clearly affecting his form. Chelsea coach Carlo Ancelotti chose to start Torres ahead of Drogba (a decision undoubtedly forced by Chelsea’s billionaire chairman Roman Abramovich) and as a result Chelsea were toothless in the attack.

In the second half Ancelotti substituted Torres for Drogba, and United’s defence were suddenly in trouble. Drogba was motivated and willing to work hard, but his efforts proved fruitless in the end. Ramires earned a second yellow card just before Drogba’s goal for an awkward-looking challenge on Nani, and Chelsea didn’t really stand a chance after that.

Manchester United were never particularly pretty in their game play, but they have been a hard-working team all season and smothered Chelsea with their enthusiastic play. Park, Rooney, Nani and Giggs were all over the field, but more often up front and causing trouble for Chelsea. Sir Alex Ferguson’s brutal work ethic continues to pay dividends.

However, this is undoubtedly one of the weakest United sides we’ve seen in a while, and we can’t see this team progressing against teams like Barcelona or Real Madrid.

Manchester United come to Old Trafford leading Chelsea by a goal to nil, thanks to a Wayne Rooney goal in the first leg. Chelsea is still looking at their fantastically expensive ?50 million sharpshooter Fernando Torres to trouble United’s goalkeeper. His recent record at Stamford Bridge does not inspire confidence. This will probably go down in history as one of the noisiest games ever. Champion’s League fixtures at Old Trafford are never a picnic, and this is a English rivalry match.

Man of the Match

Hopefully this won’t be as tedious as the first leg.

Chris Smalling is warming up off the field. Rio Ferdinand is hobbling about, apparently in some discomfort.

Why is Sir Alex prolonging Rio Ferdinand’s agony? Surely a fit Smalling would be more effective than the knobbled Ferdinand?

The game has been dominated by half-chances and fitful stabs at goal. The football being played by both teams is best described as “user-manual boring” rather than “poetry in motion”.

Chelsea have collected more yellow cards than serious shots at goal in this half. A red card would really open up this match, which would enliven this otherwise tame match.

First half ends. The difference has been United’s industry and purpose in front of goal. They haven’t arsed about like Chelsea’s strikers. Carlo Ancelotti will want to give his attack more teeth, which means taking Torres off.

I’m not convinced Van der Sar is keeping a clean sheet because United’s defence is that good. They’ve been largely untroubled by Chelsea so far.

Can Sir Alex please take Rio Ferdinand off? What purpose is being served by having him limp around the field, wincing like an seven-year-old boy in a dentist’s chair?

Roman Abramovich doesn’t look too chuffed. You get the feeling that for Ancelotti, a lot more than a win against United is riding on this match

Someone call the Pope! There’s been a miracle at Old Trafford. Ferdinand appears to have shaken off the knock on his leg. Shakhtar’s chances of progressing to the semifinals of the Champion’s League were miniscule at best. They needed to overcome a four-goal deficit after having succumbed to a crashing 5 – 1 defeat at the Camp Nou in Barcelona last week. Their performance before their home crowd in Donetsk was good in the build-up, but lacked finishing – a fatal mistake to make when playing against Barcelona. Messi sank the home side’s hearts in the first half when he scored a brilliant goal, beating several defenders and the keeper with a deft shot struck in a half-movement.

Barcelona are once again looking like the firm favourites to win this year’s Champion’s League trophy, but they have yet to play against a side that matches them in both talent and tactics in the knockout stages. As Inter Milan proved last season, Barcelona’s coach Pep Guardiola can be undone by a crafty manager like Jose Mourinho. DM