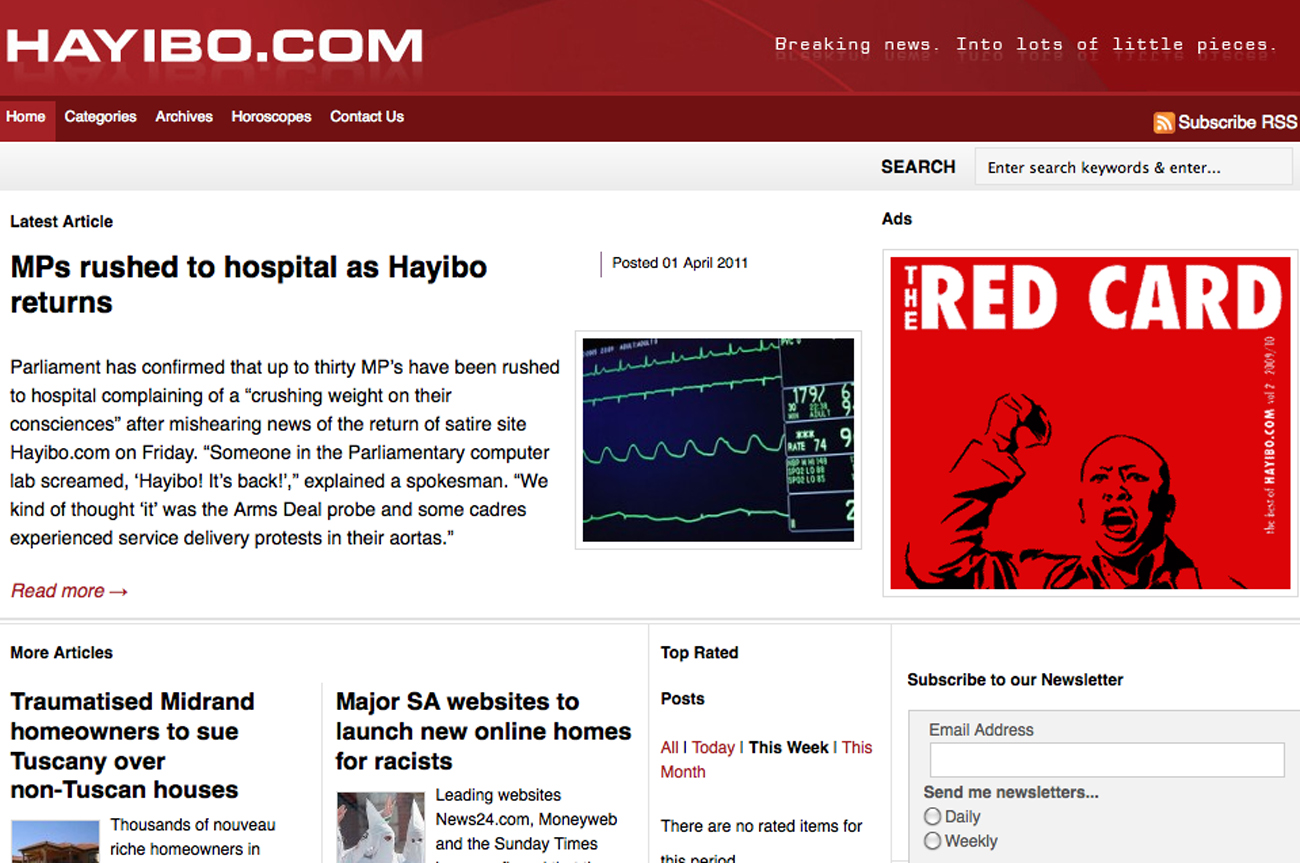 Satire-loving South Africans were heart-broken when Hayibo.com closed shop seven months ago. Well, there’s bad news and good news in the offing. The bad news for foot-in-mouth politicians is they’re back, and the good news for the rest of us that this is no April Fool’s joke. By MANDY DE WAAL.

Hordes of fans of the lampoon-loving site Hayibo went into national mourning on 1 September 2010, as news of the site’s demise spread across Twitter to the clamour of much wailing, weeping and gnashing of teeth.

“We kept the site running just in case anyone wanted to buy anything from the shop,” says Tom Eaton, one of this country’s finest satirical writers and a co-founder of Hayibo. “Earlier in March our technical guru Steve Porter decided that enough was enough and he was going to close down the site and take it offline. He sent out one last email to a few people to whom we had been talking to say the site was closing and it was goodbye. One of them replied saying they’d like to talk.”

The result of that talk is that Hayibo has found a satire saviour who will sponsor the site for an entire year. South Africa has Cape Media CEO Andrew Fehrsen to thank for breathing life back into Hayibo.  Cape Media publish Leadership and BBQ together with a number of other specialist business-to-business magazines. “Luckily the whole structure is still in place, we didn’t dismantle anything so we can start up again immediately as if we’d never been gone,” says Eaton.

Which means if you scoot on over to Hayibo you’ll find Eaton, Anthony Pasco, Rebecca Davis and all the other writers that tickled your funny bone. “We are going to find one or two more writers now that we can pay them.” But will there be enough material on the local news front? “There will always be enough material for us to draw on and especially now just before and after the (local government) elections. Politicians outdo each other to say stupid things.” Not to mention news of Floyd Shivambu calling a journalist a “white bitch”, crime intelligence boss Richard Mdluli appearing in court on charges of kidnapping and murder, and government spokesman Jimmy Manyi being… well, Jimmy Manyi.

If you think satire’s an easy genre to write, think again. It’s one of the toughest forms of writing to master. “It is a hard thing to get right when you are doing it every day live. When it is a case of get up in the morning, see what is going on, smash out an article and publish it, then it can become a little tougher to see the lighter or funnier perspective. But there is a certain level of bizarreness that resonates. In this country where there is so much that can be turned into satire, you sometimes have to be even crazier than the news to get a good laugh.”

The best-read pieces on Hayibo included a story on Gauteng’s Gummi bear communities being pulped by tunnelling machinery and Saudi scientists declaring the “so-called Vagina” a myth. The Saudi Vagina story was so good that a lot of people in the US thought it was true. “That went viral in the US and it was all over the blogs in the US with people going: ‘Yes, those freakin’ Saudis and those freakin’ Arabs, they are uncivilized and blah blah blah’,” says Eaton.

Another story that incredulously was taken as gospel was one about Somali pirates, entitled “Somali pirates started reign of terror with mixed tapes at home”. “We did one about piracy off the Horn of Africa which said the pirate thing started with mixed tapes. That was actually quoted by an intellectual property rights lawyer. She was doing some research on piracy, and obviously just Googled ‘piracy mixed tapes’ and the next thing this story was in an official legal document. Of course The Sunday Times got hold of that and this person was horribly embarrassed. It didn’t do her legal career any good,” says Eaton.

Hayibo didn’t fully realise how popular and well-loved the site was until it folded. “People don’t tend to write letters of praise when you are ticking along, but when it was shut down we got dozens if not hundreds of emails, it was all over Twitter and the phone calls kept coming in. It was really wonderful. We hadn’t realised we meant that much to people. Hayibo was very precious to a lot of people which made closing it down even harder. But starting it up again is great because we know we are going back to all those people who love us.”

Count The Daily Maverick among them, Tom. Welcome back. We missed you. DM