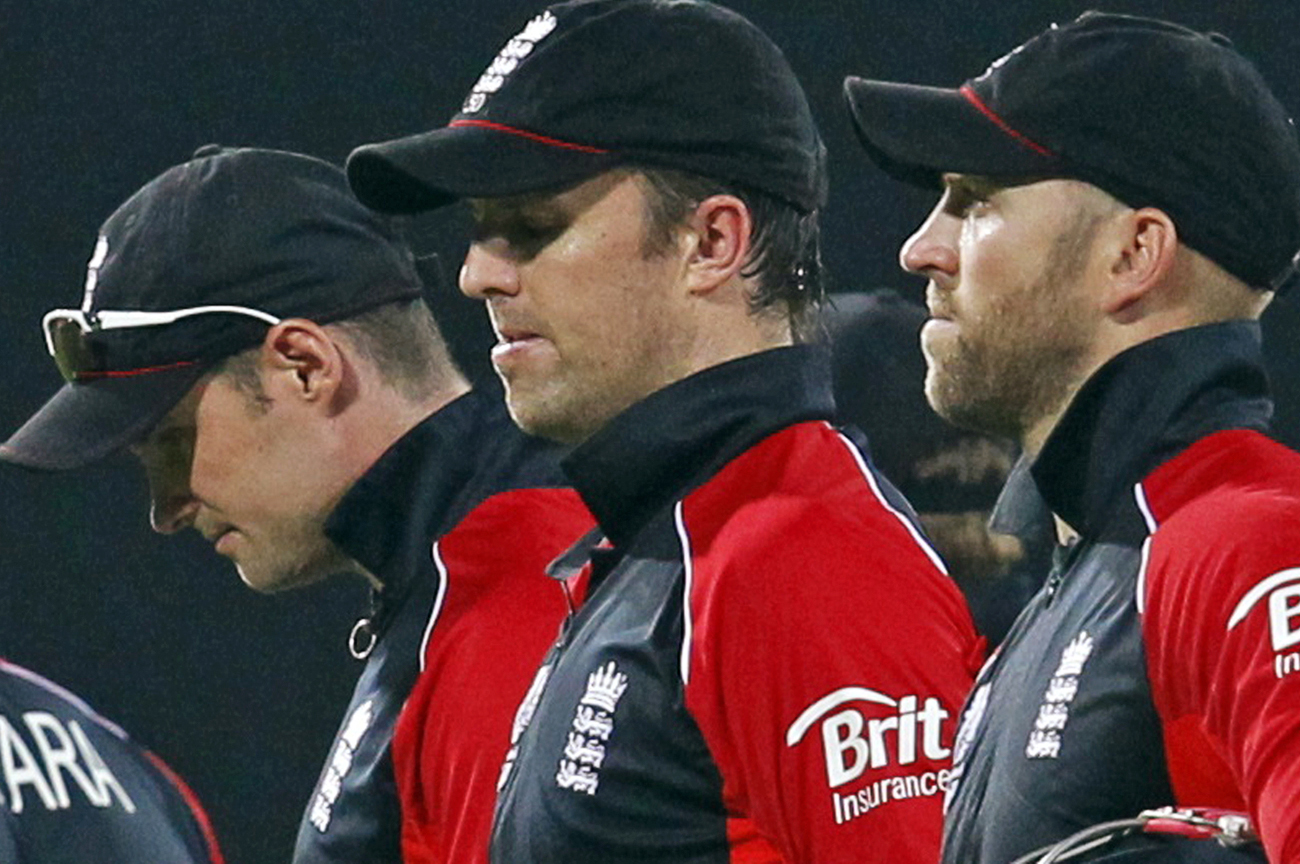 England's up-and-down journey through the World Cup finally came to an end in a completely one-sided affair in Colombo on Saturday. Sri Lanka dominated every facet of the game and go into the semi-finals - arguably top contenders for the 2011 trophy. By SIMON WILLIAMSON.

Andrew Strauss won the toss and chose to bat at the Premadasa Stadium in Colombo on yet another slowish World Cup pitch. The speed of the surface was to match England’s batting in spite of Ian Bell (England’s latest and correct opening partner for Strauss) making a cameo at the top of the order. Sri Lanka’s bowlers united to apply the brakes with what seemed to be a half-fit Muttiah Muralitharan, the only man who seemed under pressure.

Jonathan Trott has been England’s most consistent and outstanding player in the last 18 months and has become one of the most reliable players in the world. He proved his class again today, holding the England innings together with a masterclass of defensive batting in a limited-overs context, keeping good balls out, running any single he could find and hitting the bad ball for four. He scored 86 off 115 balls – a slow knock, but one which surely withdrew some momentum from the home team.

Sri Lanka bowled very few hittable balls with Ajantha Mendis the stand-out figure – he finished with 1/34 off his 10 overs.

While Sri Lanka’s bowlers did their job, their fielding was diabolical. Eoin Morgan came in to boost the run rate and was put down four times during a sprightly 50, allowing him to push England toward their eventual total of  229/6. Photo: The bat flies out of the hands of Sri Lanka’s Tillakaratne Dilshan as he tries to hit a shot in the run up to their victory over England in their ICC Cricket World Cup 2011 quarter-final match in Colombo March 26, 2011. Dilshan and his teammate Upul Tharanga both scored centuries, with Tharanga hitting a shot off the final the final ball to both win the match and reach his century. REUTERS/Philip Brown.

An ask of 230 wasn’t great, but I felt it was defendable if some luck went England’s way. The Sri Lankan batsmen, however, disagreed with me. Strongly.

Tillakaratne Dilshan and Upul Tharanga showed the world exactly how a target should be attacked. Andrew Strauss opened the bowling with Tim Bresnan and Graeme Swann, but the batters were having none of it. Bresnan’s second over went for seven runs and Swann’s second and third both went for eight, including a six straight back over his head and a stunning four driven through the covers. Both bowlers were replaced, but Ravi Bopara’s first ball was slapped to the off-side boundary and Chris Tremlett was hit for two fours in his first over. At the end of the mandatory Power Play the score was 57/0 : advantage Sri Lanka. The bowling Power Play and indeed the rest of the match proceeded in the same fashion.

Strauss brought on James Tredwell to try to stem the run rate, but that failed, as did every single thing he tried throughout the innings as the openers slashed through England’s attack. Stuart Broad (injured) and James Anderson (dropped) were missed, but I am not sure that any other bowlers would have made that much of a difference to the way these two batted. Dilshan smashed Tredwell over long-off for six in the 17th over and followed it up with another four in the 18thoff Swann. Photo: Sri Lanka’s Upul Tharanga (C) celebrates their victory with teammate Tillakaratne Dilshan (R) after their victory over England in their ICC Cricket World Cup 2011 quarter-final match in Colombo March 26, 2011. Tharanga and Dilashan both scored centuries, with Tharanga hitting a shot off the final the final ball to both win the match and reach his century. REUTERS/Andrew Caballero-Reynolds.

Strauss correctly moved the field in as the target dwindled, but the batsmen just went over it with the glut of fours and sixes continuing. They both reached their fifties within an over of each other and simply continued thrashing the ball around the Premadasa Stadium.

It was a completely dominating performance in one of the most uneven games of the tournament and there was nothing Strauss could do. He even tried bringing Tremlett back to bowl the 26th over  – and dropped two tricky chances off his own bowling. That was the last sniff England had and it merely punctuated the flood of boundaries which continued. And continued. And continued.

Dilshan brought up his 100 with a cut to the fence for another four and Tharanga got to his as he stroked the winning runs through the off side.

England depart the tournament having played some of the worst cricket seen, yet cancelling it out with grit and determination. Unfortunately, “gees” alone does not consistently win games as too few contributions from key players showed. England will have to go back to Blighty and face their press. I expect the coach, captain, manager, selectors and support staff all to have their P45s stamped and signed by tomorrow afternoon.

Sri Lanka have delivered the most convincing performance of all the semi-finalists. If I was New Zealand, I’d be very nervous indeed. DM