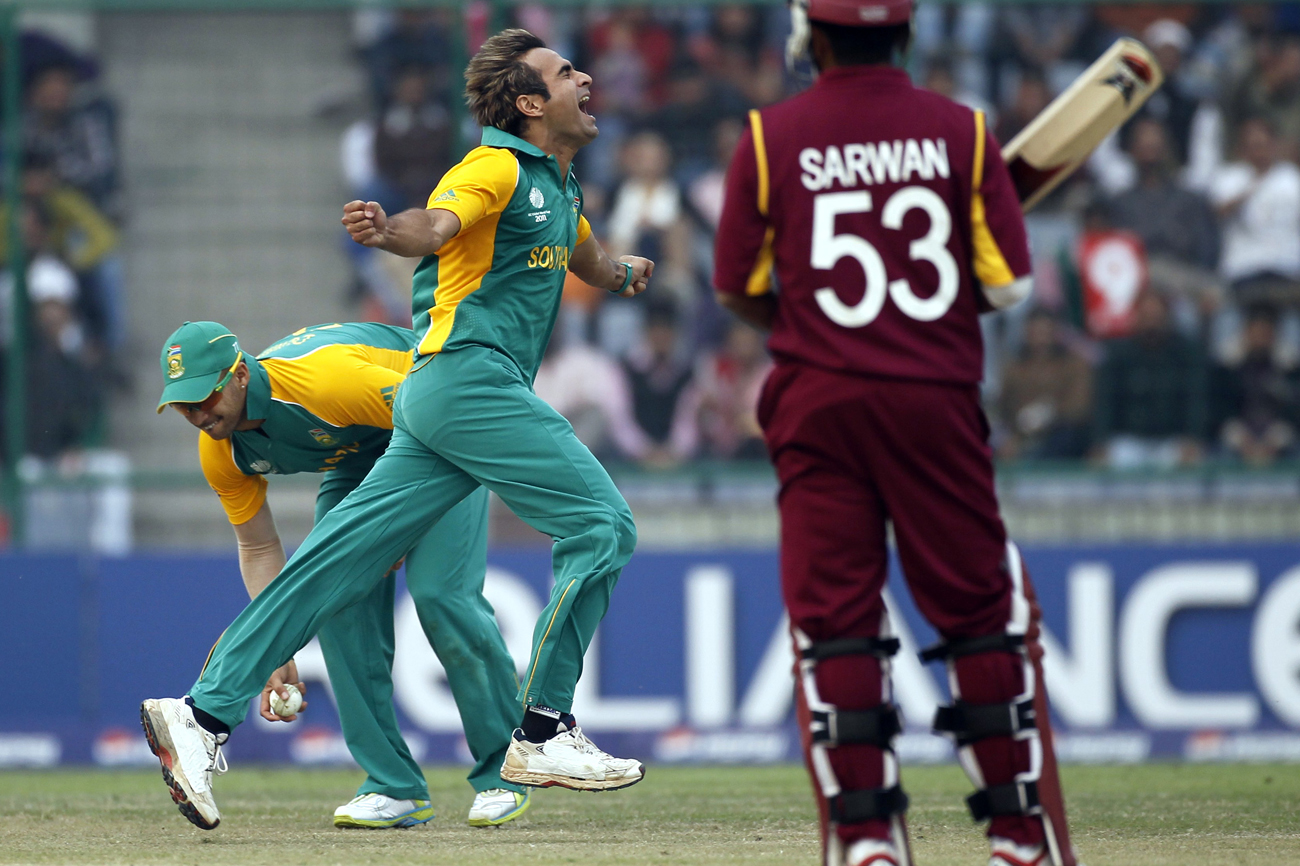 With that perennial Damoclean sword of top-level “chokers” hanging over their heads – and likely to dog them irrespective of their on-pitch performance – the Proteas instead put a perennially lacklustre West Indies side to the sword thanks to a span of spinners and a towering ton in their opening match of the 2011 Cricket World Cup in New Delhi. By SIMON WILLIAMSON.

For the first time since the 1910s, South Africa on Thursday went into a fixture with the expectations of the nation sitting on a battery of spinners. Throughout tours of the Indian sub-continent, the Proteas have lent respect to having a token tweaker in the team, but with the addition of Pakistan-born Imran Tahir, the team finally has an attacking slow option – who was as effective with the ball as AB de Villiers was with the bat.

Electing to bowl and opening with a spinner – in this case Johan Botha – may have seemed strange, but the risks paid off on the third ball of the innings when Gayle was caught at slip. The West Indies’ best player was replaced by their most promising and Darren Bravo didn’t disappoint with an authoritative 50.

Botha put paid to Bravo for 72, but it was the flighty leg-spin of Tahir which undid Smith and Sarwan. Armed with real turn, a googly (which the West Indies batsmen read about as well as they read the Cyrillic alphabet) and reasonable control for a leggie, he is an asset to the South African side in spite of forcing us to contain our criticism of the Empire XI which just won The Ashes. The real threat of Tahir was summed up in one over – the 45th of the innings, and his last, when Thomas was too fearful of exposing Darren Sammy (who can actually wield the willow somewhat) to the fizzing wonders sent down by our adopted weapon.

Dwayne Bravo and Shivnarine Chanderpaul’s promising partnership was undone by a pathetic piece of running with 12 overs to go. The new man, inexplicably, was Devon Thomas instead of the devastating Kieron Pollard – it seems the West Indies are as clueless about using Pollard as South Africa is with Albie Morkel, and believe their careers should only happen in 5-over Power Play bursts. It mattered not. When Pollard did come in, Steyn sent him packing off his first ball.

Smith’s captaincy did its work with nearly all his changes successful, including the return of Steyn to remove Pollard first ball. The partnership of the Phalaborwa Express and our brand new Weapon of Mass Destruction removed Chanderpaul, Pollard, Thomas and Sammy all within four overs. From 113/1 the West Indies collapsed to 222. Amla and Kallis both departed early and De Villiers joined his skipper as South African cricket watchers began to shit all over the cursed team of chokers they are forced to support with not an off-button or different sport in sight.

The Delhi Daredevils have been AB de Villiers’ IPL franchise for the last three years and it showed in the first full over he faced from Roach. A defensive push and two more aggressive back foot shots screamed through to the off-side boundary and the precedent was set.

Sammy and Bravo followed the two opening bowlers and there was an immediate drop in intensity. As accurate as these two are, the pace of Roach and the turn Benn was getting were lacking. While Smith and De Villiers had to work for runs against good accuracy, the danger of going out was reduced like Marmite. Things got worse for the West Indies when Dwayne Bravo injured himself. Sadly, he would play no further part in the fixture. And probably won’t in the tournament.

Smith is still seemingly struggling to find the middle of the bat. It is a testament to his sheer bloody-mindedness that he can play an innings where he looks so uncomfortable. A fluid Smith slaughters bowlers, a struggling one still scores – just (much) less fluently. De Villiers, on the other hand, stroked the ball wherever he pleased during a mix of boundaries interspersed with well-judged and nippy singles.

West Indies’ tactics played into South Africa’s hands. No attacking bowler came on until Roach in the 24th  over when the horse hadn’t quite bolted, but had noticed the stable door was open. Sammy also set very defensive fields, not forcing shots from the batsmen when he should have focussed on Smith in particular. To be fair, he was happy to leave De Villiers an easy single to get Smith back on strike, but just didn’t act upon it when he was.

Smith’s painful innings of 45 finally ended on its 78th  delivery when Pollard rearranged his stumps. He was replaced by Duminy who was initially uncomfortably tested by Roach banging the ball in short, proving the value of proper pace on flat wickets. Pollard then tried the same with his horse-drawn carriage speed and was deposited across the square leg boundary to bring up South Africa’s 150. At this point South Africa required 70-odd at under four an over, and as much as the commentators tried to talk the game up into something exciting, a professional South African performance would sew it up, and that is precisely what happened.

A short rain delay merely deferred the inevitable: a De Villiers hundred at better than a run a ball and a pretty emphatic South African win. DM