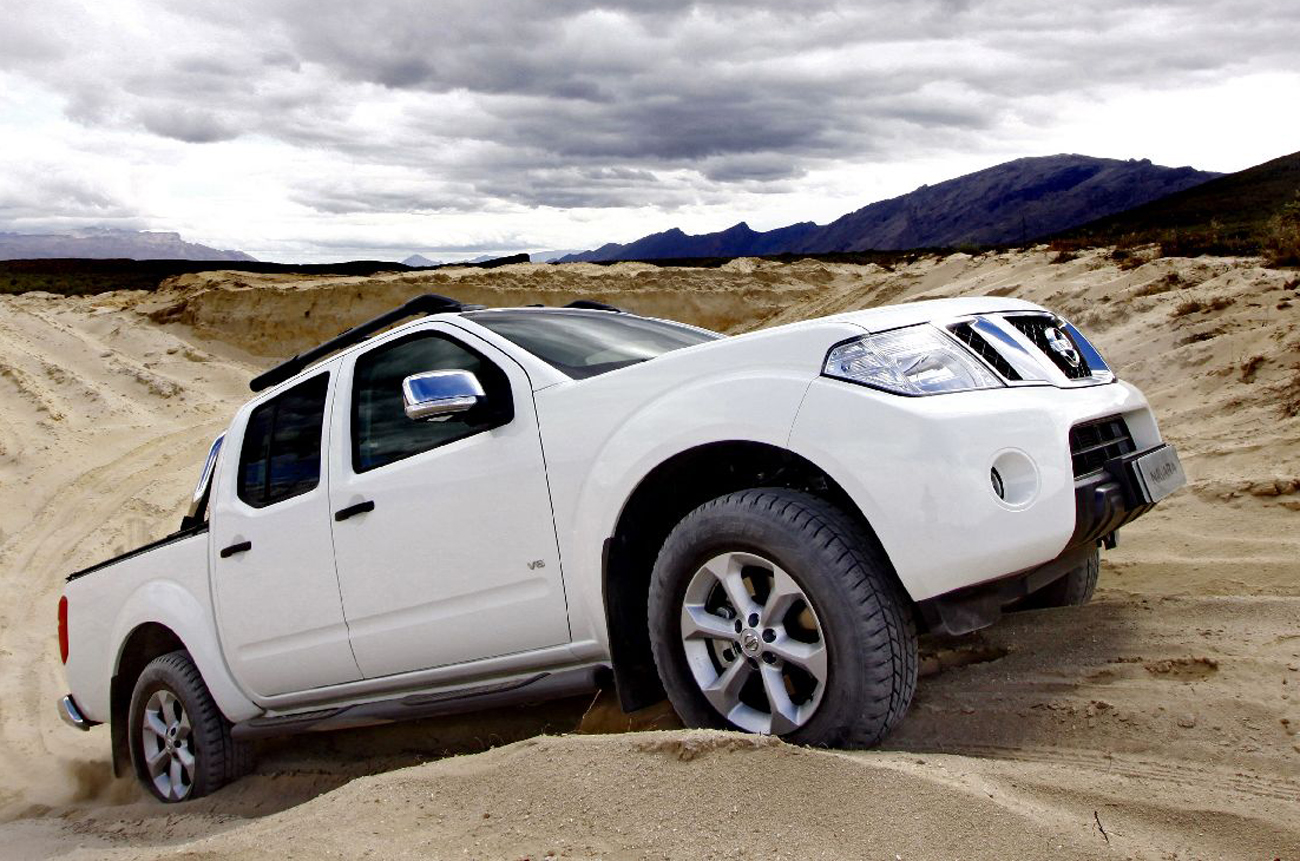 South Africa is bakkie country and in off-road leisure, the double-cab 4x4 has long been a local favourite. It’s a market dominated by Toyota’s Hilux for many years, but recently there have been some new pretenders to the throne. Volkswagen’s Amarok, for one, has created quite a stir. Now there’s a new candidate for outright superiority in this segment – and it wears a Nissan badge. By DEON SCHOEMAN.

The Nissan Navara is an established player in the 4×4 double-cab sector, thanks to its supersized presence, ruggedly handsome styling, spacious cabin and ample load-carrying capability. It’s also been a frontline player in performance, although the four-litre V6 petrol has always outshone the 2,5-litre turbodiesel in dynamic terms.

Given Nissan’s long and fruitful association with V6 petrol engines, fitted to anything from sports cars to utility vehicles, it should come as no surprise that the V6 has also commanded centre stage in the Navara context. Until now that is.

Acknowledging the popularity of diesels in the off-road and leisure vehicle segment, Nissan has now thrown down the gauntlet with the introduction of a brand-new, high-tech three-litre V6 turbodiesel engine that can stand its ground against the very best – including the powerplants in some of those fancy SUVs from premium brands. Codenamed VX9, the all-new three-litre turbodiesel engine was developed in France, and features a host of cutting-edge technologies to produce class-leading output figures. The 2,991 cc V6 is credited with 170kW of maximum power and a crunching 550Nm of torque – figures that crown the Navara 3.0 dCi as the power king of the 4×4 double-cab sector.

The output stats are the first indication there’s nothing agricultural about the new V6 turbodiesel – and there’s certainly more to this powerplant than sheer muscle. Instead of old-style cast iron or lighter aluminium, the VX9 has a block made of compacted graphite iron, or CGI.

It’s a material that’s said to combine the strength and noise-absorption properties of cast iron, but weighs significantly less. And while it’s not as light as aluminium, it requires no reinforcing ribs or extra sound insulation, which means that in overall weight terms, the two materials are comparable. The V6 has an unusual 65° angle, with a single, large turbocharger wedged snugly inside the V. Optimised combustion chambers allow a good compromise between fuel efficiency and low emissions, while a low compression ratio reduces noise and vibration.

The result is an engine that links eye-watering power and torque to unusual refinement, low noise levels, reduced emissions and enhanced fuel efficiency.

While most of the important news is under the bonnet, the new flagship of the Navara range also gets a styling upgrade. There’s a bolder, shinier grille, linked to a redesigned bumper, while the re-profiled bonnet is more aerodynamic too. The rest of the package remains unmistakably Navara – and that’s not a bad thing! It’s not only instantly identifiable, but at 5.3m long and 1.85m wide, it’s also a big, bold brute of a  bakkie.

But let’s not forget that, for all its sophistication, the Navara is still a utility vehicle at heart – and that means its load box is a key part of the overall package. At 1.5m by 1.56m, the useful cargo space is not too shabby.

That said, the Navara still trails the VW Amarok in load box space terms. But who cares when the rated payload is an impressive 900kg, while the Nissan has a rated towing capacity of up three tons.

It’s only fitting that the top model in the Navara range gets an upgraded interior more comparable with that of a big SUV than a bakkie. As before, there’s loads of space front and rear, while switchgear has been upgraded, and the cloth trim is plusher than before. However, given this Navara’s half-a-bar price tag, leather upholstery should be standard, especially considering how comprehensive the rest of the standard equipment list is.

A glance at the centre console reveals a high-resolution colour screen linked to Nissan’s Premium Connect system. It combines navigation and a DVD player with a 40GB hard drive, Bose sound, Bluetooth connectivity for hands-free cellphone communication and audio streaming, an iPod-compatible USB port and a stereo audio auxiliary jack.

The only bad news here is that Premium Connect is also an option, and adds a further R25,000 to the asking price – which sounds steep, but isn’t a bad deal, given the functionality of the system. Besides, it does much to considerably elevate the Navara’s motoring experience. Operation is intuitive and the sound quality is pretty awesome.

While the fit and finish look good, it’s obvious that some of the plastics are prone to damage and scratching through everyday use – not good news given the expected usage pattern of a big 4×4. The test unit showed evidence of wear and tear out of kilter with the 9,000km on its odometer. But then, press test cars do work harder than normal vehicles, I suppose. Safety is comprehensively addressed via front, side and curtain airbags, as well as a raft of active systems that include VSC stability control, ABS brakes with EBD and EBA and a brake-actuated limited slip diff.

With such a full house of luxury, convenience and safety features, it’s easy to forget the Navara is a gung-ho, dyed-in-the-wool 4×4, complete with selectable all-wheel drive and low range. And with all that torque, it’s all but unstoppable in the rough stuff.

The 230mm ground clearance and generous suspension travel suffice in most instances. But the ponderous turning circle makes for arduous manoeuvres in tight and twisty off-road trials, and isn’t helped by a steering that requires too many turns from lock to lock. The side steps may look macho, but tend to snag obstacles all too easily.

Despite a kerb mass of 2,1tonnes, the Navara never feels ponderous or lazy, and in fact requires judicious use of the loud pedal.

The seven-speed auto gearbox  promises a smooth, responsive shift action, but in reality, cog swaps are slow and the sequential manual shift option is too often ignored by the Navara’s electronic control unit. Frankly, it doesn’t feel anything like an auto box, and given a choice (which there isn’t) we’d take a manual box any day. Even so, the big Navara feels athletic on the road. It bolts off the mark with as much alacrity as the torque converter and the initial inertia of all that bulk will allow, and never seems about to run out of steam. Nissan quotes a zero-to-100 time of 9.3 seconds and 195km/h top speed – stats that feel easily achievable, and are impressive for a two-ton double-cab bakkie!

Fuel consumption and emissions are pretty good for a big 4×4 too. Nissan claims a combined-cycle figure of 9.5 seconds, but our real-world experience saw a figure of closer to 13litres/100, which is still good. The CO2 emissions come to 250g/km.

In handling terms, the Navara can’t hide its commercial vehicle origins. A relatively high centre of gravity, all-terrain tyres, and that vague steering mean that the Navara feels its size and weight when tackling twists and turns at speed. Stability control intervenes to prevent wheelspin and any tail-happy antics, but then, the Navara was never meant to be a sports car. It’s competent and comfortable when cruising long-distance, and shines on compromised surfaces. High-range 4×4 mode takes care of slippery gravel and the big Nissan loves the rough stuff. It promises to be a great tow vehicle too.

So the new top model in the Navara range emerges as an impressive all-rounder, with class-leading power and torque, a plush interior with all the bells and whistles, and what must now rate as the best turbodiesel in the 4×4 bakkie business.

But such excellence comes at a price: this flagship retails for R533,400. A top-spec Hilux costs R408,000, and the range-topping VW Amarok carries a R390,000 price tag – although both trail the Navara in terms of power and equipment.

Yes, the Nissan Navara three-litre dCi V6 is now the undisputed king of the 4×4 double-cab segment. But in value terms, its own 2.5 dCi LE stablemate might be its most compelling rival, and at R130,000 cheaper, the more sensible option. DM