Another building block in the Garden of Steve, the Mac...

Another building block in the Garden of Steve, the Mac App Store opens its virtual gates 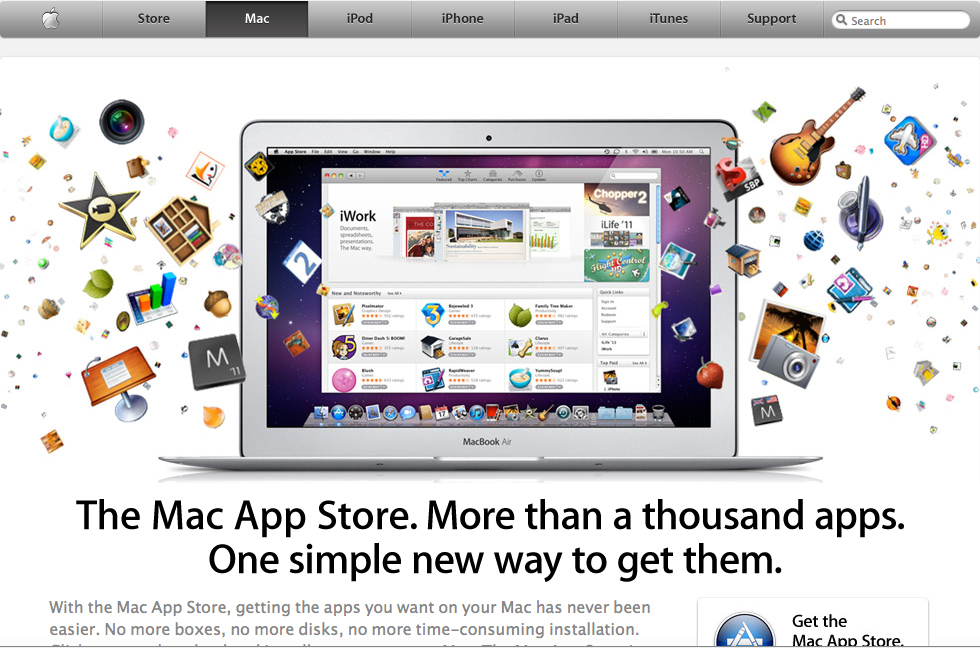 Apple unveiled its new Mac App Store on Thursday, finally bringing the kind of ease iPhone and iPad users have enjoyed to the Mac. By creating a safe haven amid the Internet’s “Wild West” environment, Steve Jobs has ensured you will check in any time you want and never want to leave. The Internet just got a lot less scary for your mum. By SIPHO HLONGWANE.

The new Mac App Store finally brings the concept to Mac desktop and laptop users, boasting approximately 1,000 apps at launch with many, many more to come, for sure. To enable it, Snow Leopard users need to update to Mac OS X 10.6.6 via the in-built software update functionality or a download from Apple’s website. Once enabled, an App Store app appears in the dock and is separate from the iTunes app, unlike iOS. MacWorld senior editor Roman Loyola said, “In my opinion, making the Mac App Store separate from iTunes is the right decision, because it separates Mac OS X software from iOS apps. It also prevents iTunes from being even more cluttered and bloated than it already is.”

The Mac App Store will synchronise account information such as passwords and credit balances for those who already have an iTunes account, or a new account may be created.

To iPhone and iPad users, the Mac App Store is a continuation of the same design and will feel familiar. Finding your way around the app store shouldn’t be a major problem for first-time users either as it continues Apple’s tradition of ensuring top-level user experience. TechCentral founder Duncan McLeod said the Mac App Store was really the next logical step for the company. “Apple popularised the app-store concept with the iPhone and iPad tablet device, so it was really a no-brainer for them to do,” he said.

The editor of Stuff magazine in SA, Toby Shapshak said the new app store should replicate the success of the iTunes store for portable devices. “The usability is very good and there are a lot of apps available,” he said. “It enables people to try new apps and software by seeing what’s hot and what Apple staff recommend, for instance.

“The most important thing is that it’s a trusted environment, even for the average user. You know the apps have been vetted and checked by Apple. So it’s a bonus for the consumer,” Shapshak said.

Aside from the transfer of experience for those already familiar with the iTunes and app store, Mac App Store should ensure that those who also have Macs will find it quite natural to have a Mac App Store; the one-stop shop for downloading new apps and media, as well as updates, will eradicate the need to wander all over the internet (and will allay the fears of those intimidated by the Web).

Think of it as a new field in the Garden of Steve, a virtual wonderland of apps and media content, where Steve Jobs and his aficionado developers tend to your every want. Not only is there everything and anything you could possibly want, the apps in this garden have been vetted, checked and packaged for consumption (after Steve Jobs takes his 30% cut, of course). You can still check out any time you want, but why would you want to leave for the unpredictable and often unsafe internet? The Mac App Store puts Mac app consumption within the ambit of even technologically challenged people.

There’s a small issue for South African iTunes account holders. According to Marc Forrest, a KZN-based Apple products blogger, the old issue of a big chunk of apps being unavailable to people who register an SA-based iTunes account is present with the Mac App Store as well. He wrote on his blog, “The biggest issue with what we have in the South African app store is that a majority of apps aren’t available. This includes the highly coveted games category. Due to various regulations in South Africa, all games, whether for PC or a device, need to pass through the Film & Publications Board to get a rating. This means most times games like Angry birds etc. will not be available for download in the SA Mac App Store.”

There’s no such problem if you have a US iTunes account, of course (hint, hint).

As natural a move as it is, the Apple App Store is a step towards closing a giant circle, bringing Steve Jobs back to the original ’80s Mac philosophy, the one in which Apple controlled every aspect of the user’s experience. It remains to be seen if that is still possible in the internet-enabled world in which not only information, but also the user wants to be free. DM