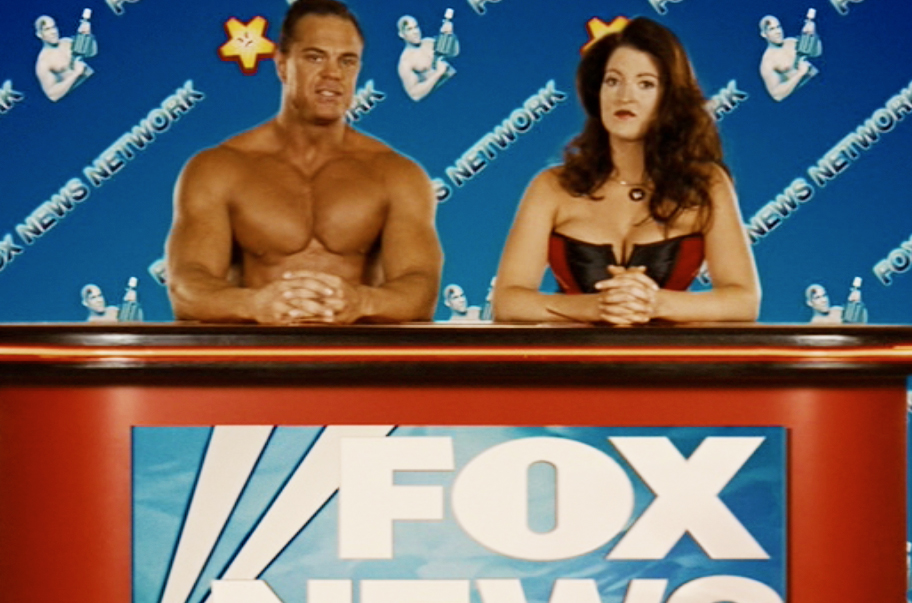 We first published this movie review in Empire magazine in 2007, but in light of recent political developments, we thought it prudent to run it again. Idiocracy was made in 2005, but the scenario it portrays becomes more and more real every day. Laugh, and then be afraid. Be very, very afraid. By KEVIN BLOOM.

It doesn’t start off that promising. The opening scene sketches a faintly amusing picture of American trailer-park trash outbreeding their Ivy League brethren, and then cuts to a bit where a US army grunt, played by Luke Wilson, and a prostitute, played by Maya Rudolph, are guinea pigs in a “human hibernation project” that’s supposed to transport them a year into the future. You know the score: hibernation project goes awry; Luke and Maya wind up in some evil dystopian future; Luke and Maya make love, rescue planet (or maybe rescue planet, make love); credits roll.

Happily, just as you’re about to call and let loose on the skate-punk at the DVD store who flogged you this crap, you hear the following from the film’s narrator:

“The years passed. Mankind became stupider at a frightening rate. Some had high hopes that genetic engineering would correct this trend in evolution, but sadly the greatest minds and resources were focused on conquering hair loss and prolonging erections.”

You hang up the phone and you sit back down, a decision for which you are amply rewarded. When Luke wakes up in the year 2505, it is into a world run by giant corporations and populated by idiots. It’s a world not too different from the one we’re in now – the one where Jerry Springer has way more cultural cache (and money) than JM Coetzee – except here things are slightly more extreme. The top-rated show on the “Violence Channel” is Ow, My Balls!, the top-grossing movie at the box office is Ass (ninety minutes of a guy’s butt, which wins nine Oscars, including one for best screenplay), and the great craft of copywriting has arrived at its logical apotheosis – a billboard for cigarettes has the catchy pay-off line, “If you don’t smoke Tarryltons, fuck you!” Idiocracy, directed and co-written by Mike Judge, the dark satirist behind the cult hits Beavis and Butthead, King of the Hill and Office Space, is a movie that should not be confused for what it mocks. This is social comment at its most cutting, a deadly funny send-up of middle America’s deadly serious malaise: the glorification of low-brow, the denigration of art and knowledge, the near-religious belief in unfettered capitalism and ecstatic consumerism.

It’s revealing, then, that when Judge showed Idiocracy to the studio execs that footed its bill, they didn’t exactly begin jumping about in breathless anticipation of its release. On the contrary, 20th Century Fox decided not to pre-screen the movie for critics, ran no print ads or trailers, and distributed it to only 130 screens across the country. Of course, astute journalists at newspapers like the New York Times and the UK’s Guardian had a theory about that – which had everything to do with the fact that Newscorp, the studio’s parent, also owns Fox News. “So why was Idiocracy dumped?” asked John Patterson in London’s leftist daily. “Perhaps because it taps a growing anti-corporate mood in the nation; perhaps because it expertly satirises the jingoistic self-absorption that now passes for public culture. Or perhaps because more people are sick of the modern America that Fox energetically helped to build than the Fox corporation itself is ready to admit.”

My personal favourite is Frito Pendejo, a public defender and the Luke Wilson character’s lawyer.

It’s Frito’s signature line that gets me, and I’ve started to repeat it around the office. “I can’t believe you like money too. We should hang out.” DM

Main photo: It is pretty obvious why Idiocracy was dumped by the 20th Century Fox distribution.