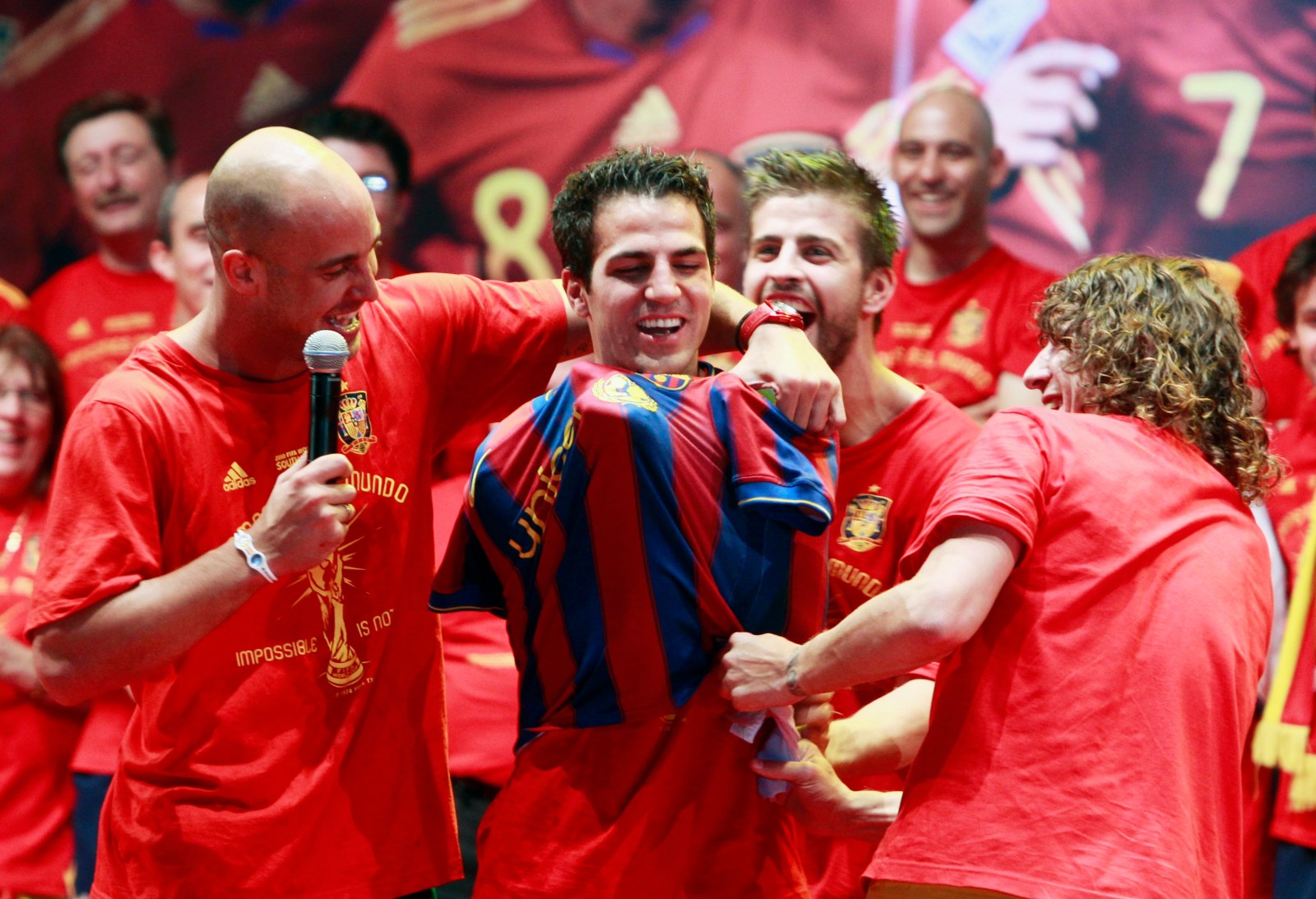 Arsenal captain Cesc Fabregas celebrated his World Cup victory in a Barcelona shirt. His attire wasn’t exactly his choice – exuberant team mates Gerard Pique and Carles Puyol forced it over his head during celebrations in Spain. Barcelona seem intent on convincing Fabregas to come home, but it is doubtful that the club has enough money to convince Arsene Wenger, the Arsenal coach, to sell his star player. According to The Telegraph, Barcelona had put in a bid of£29.2 million that was rejected. For now it seems that Fabregas’s heart is with the English club. In a move sure to have raised a few eyebrows in Spain, he dedicated his World Cup win to Arsenal players and fans and left no doubt as to his loyalties. “I am an Arsenal player and proud to be,” Fabregas said.

It was the Dutch who were in a fighting (although not winning) mood during Sunday’s World Cup final, but players from both sides have subsequently been sniping at each other via the media. Although Xabi Alonso’s criticism of Nigel de Jong for that “tackle” during the final is surely a worthy battle to fight. Alonso didn’t mince his words: “It was one of the most painful tackles in my life and it was hard to play on,” he said. Even De Jong has acknowledged that he probably deserved to have been sent off for his kick to the Real Madrid player’s ribs. Fabregas has said he probably has a broken rib but is not too worried about it. But if he wants to start the club season fit and healthy, it wouldn’t harm him to have a second opinion from an actual doctor.

English referee Howard Webb, who officiated at Sunday’s final between Spain and The Netherlands, has defended the way in which he handled the match. The game was marred by dirty play, notably by the Dutch players, and Webb had a tough time keeping control on the pitch. He dished out 14 yellow cards (nine to The Netherlands, five to Spain), but only one red. Generally consensus is that he was soft on the Dutch players (for example, not giving Nigel de Jong a straight red car when he planted his studs in Xabi Alonso’s chest), trying to calm them down rather than sending them off, in the interests of having a good final. Ironically, it is the Dutch players who have complained the most about Webb’s skills, when it is they who clearly benefited from his decisions. Then again, it’s generally the losers who are the whiners. Webb brushed off criticism upon his return to England on Tuesday, saying: “It is one of the toughest games we will ever be involved in and we feel that we worked hard to keep the focus on the football as much as possible.”

We all know the positions of the four top countries at the 2010 World Cup (Spain, The Netherlands, Germany and Uruguay, if case you need a refresher already). But who came 17th? Or 23rd? And where exactly did South Africa finish? Fifa has released its World Cup standings, which are calculated on group result, progress in the competition, and the quality of the opposition. The top African performer was, of course, BaGhana, BaGhana, who came seventh. England were given something to moan about when they managed only 13th place, their lowest World Cup ranking ever. South Africa ended up at a very respectable 20, one of the highest placed teams not to have made it past the group stages. The wooden spoon went to the lowest-ranked team, North Korea. And if you really care about who came 17th or 32nd you can click below for the full list.

World Cup. We thought we’d play out with this superb World Cup/District 9 mash-up produced by the BBC. We’re not going to say much more about it – just that it’s guaranteed to bring back that warm and fuzzy high you may’ve thought was gone for good. The rumours are true: Phillip hasn’t left South Africa, but is holed up away from the cold front of his computer, watching this on repeat. The official BBC video has been removed from YouTube for copyright infringement (yes, Fifa has some difficulty letting go too), but we’ve found another link for you. We have a hunch it won’t be around for too long, so don’t faff around sorting out the coke and popcorn – watch it right this second. And if the link below has been shut down too in the meanwhile, the search function on YouTube is your friend.

Photo: Spain’s Pepe Reina and Carles Puyol (R) put a Barcelona shirt on team-mate Cesc Fabregas (C) as they celebrate their victory on a stage in downtown Madrid, July 12, 2010. Spain stunned the Netherlands to win their first World Cup on Sunday in sensational fashion with a goal in the last minutes of extra time. REUTERS/Andrea Comas