The Dutch crush Forlan and co, finally condemning them...

The Dutch crush Forlan and co, finally condemning them to history. Oh yes, they also qualify for the World Cup 2010 final 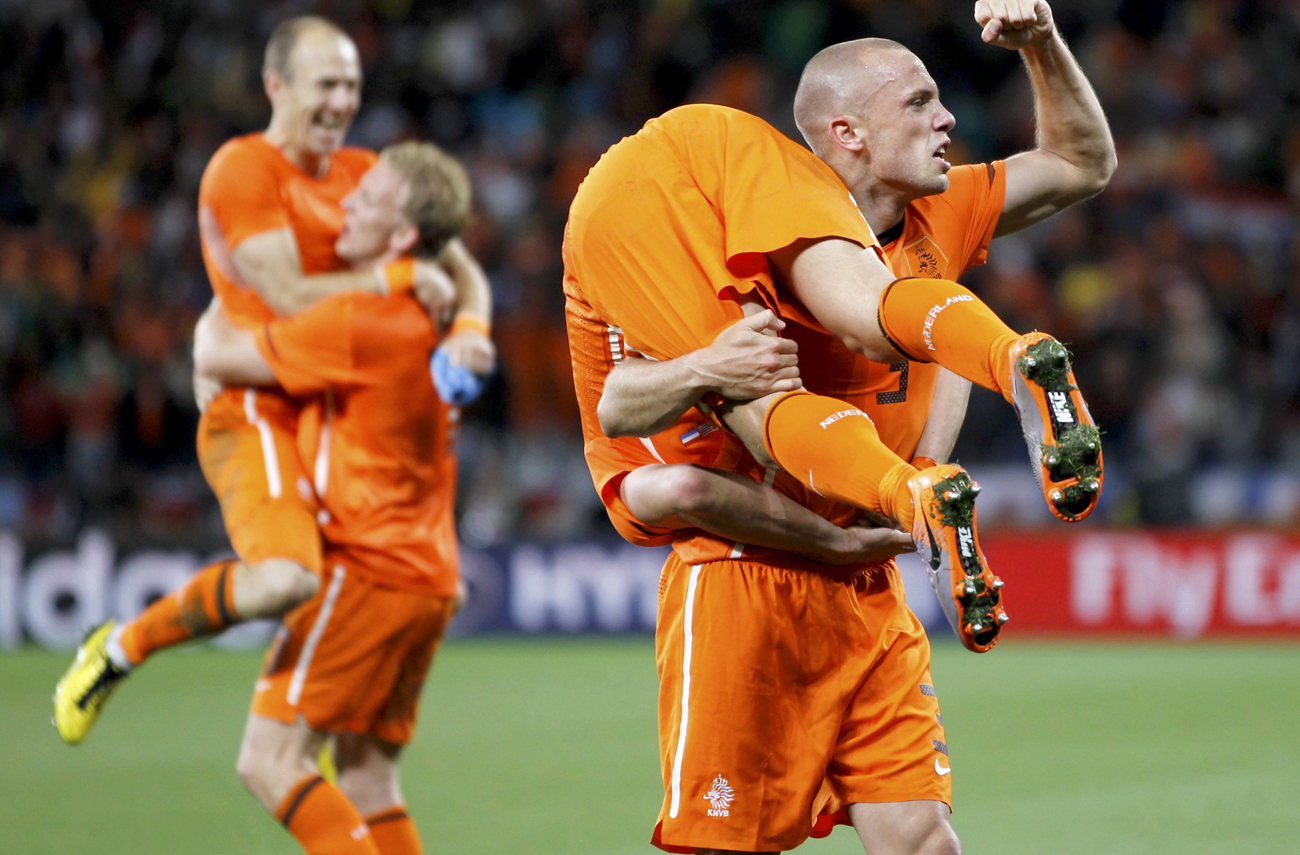 As we’ve been used to at this World Cup, it was another war until the very last second. As always, the Uruguayans fought bravely but this time the orange tide was overwhelming. The match ended The Netherlands 3, Uruguay 2, guaranteeing that, for the first time ever, a European team will win the Cup outside Europe.

It is a long-established truth that the best games of any World Cup are semi-final games. By the time they reach semi-finals, teams usually gel into a great organism and are ready to produce the best games of their footballing lives. Not this time, though. Cape Town’s Green Point stadium saw a team of cautious Dutch players meet a wounded team of Uruguayans that was lacking some of their best players. The result was a game that was decidedly not pretty; and yet, the tension in the air was so palpable that the emotions alone were worth watching it for.

Even before the game, there was an air of inevitability in the air: the Dutch were simply too strong, with all their major stars ready to play, while Uruguay was missing some of its key players in captain Diego Lugano, defender Jorge Fucile and, of course, Luis “hand of God” Suarez. By all accounts, it was the Dutch’s game to lose. And yet, for most of the game, reality refused to comply with preconceptions: while the Dutch did take the lead in 18th minute, via freakishly brilliant shot by their captain van Bronckhorst, it was still obvious that the Uruguayans do not have the words “surrender” and “impossible” in their vocabulary.

For most of the game, they stood their own, fighting the Dutch play-by-play, move-by-move. Forlan’s equiliser in 41st minute was equally brilliant and the game looked destined for extra time when the Dutch got what they’ve already been very blessed with this World Cup: some luck. Sneijder’s weakish shot was deflected into the goal, behind a bewildered Muslera, who didn’t really stand much chance. A few minutes later, the Uruguayans’ role in the semi-finals was reduced to being polite observers when Robben uncharacteristically and brilliantly headed Kuyt’s cross into the very corner of the goal that was most difficult to reach.

Uruguay’s second goal came way too late to hope they’d slot one more into the back of the net in the 120 seconds or so that remained of the match; nevertheless, it was fascinating TV.

The Dutch are now heading for an all-European final. Beautiful soccer theirs ain’t, but very efficient it is. They are not going to be easy to deal with in the final, their suffering opponent being Germany OR Spain.

Both countries made several changes for the World Cup semi-final at Green Point Stadium.

Mathijsen is back to the centre of the Dutch defence in place of Ooijer after missing the quarter-final win over Brazil with a knee injury. Right fullback Boulahrouz and midfielder de Zeeuw are in instead of van der Wiel and de Jong.

From the Uruguay side of the pitch, Lugano is missing out through injury, while Fucile and Suarez are suspended. Coach Tabarez is hoping that his forced re-organising, especially of defence, will not turn out to be a disaster.

In the first 15 minutes, the Dutch are their usual cautious selves while Uruguay miss Suarez terribly. The Uruguayan defence is very good, but the attack is a bit without teeth. Since van Bronkhorst’s goal, Uruguay more or less control the play in some sort of feeble rage, while the Dutch are mostly passive, defending carefully, waiting for their moment to engage, like Kuyt did now. One has to hand it to the Uruguayans. Although without key players and facing a hostile stadium, they are still firmly in the game. Forlan must rank as the best player of the World Cup so far. As for the Dutch, they are rather subdued, and more or less the only good thing they’ve done is their captain’s goal. That’s it.

Real Madrid’s van der Vaart is replacing de Zeeuw, who is probably feeling the effects of getting a boot to the face, circa the 27th minute.

The Uruguayans appear to have learned a lesson from Brazil’s loss to the Dutch: they keep a really tight lock on Robben, but they are much more careful in not fouling him. Their defence, even when manned by second-stringers, is rather well organised. The Dutch survive through two very nervous minutes, during which Van Bommel, one of the dirtiest players alive, finally gets his well-deserved yellow card. Uruguayans did their utmost best, but scoring against the Dutch in the space of 120 seconds borders on the impossible.