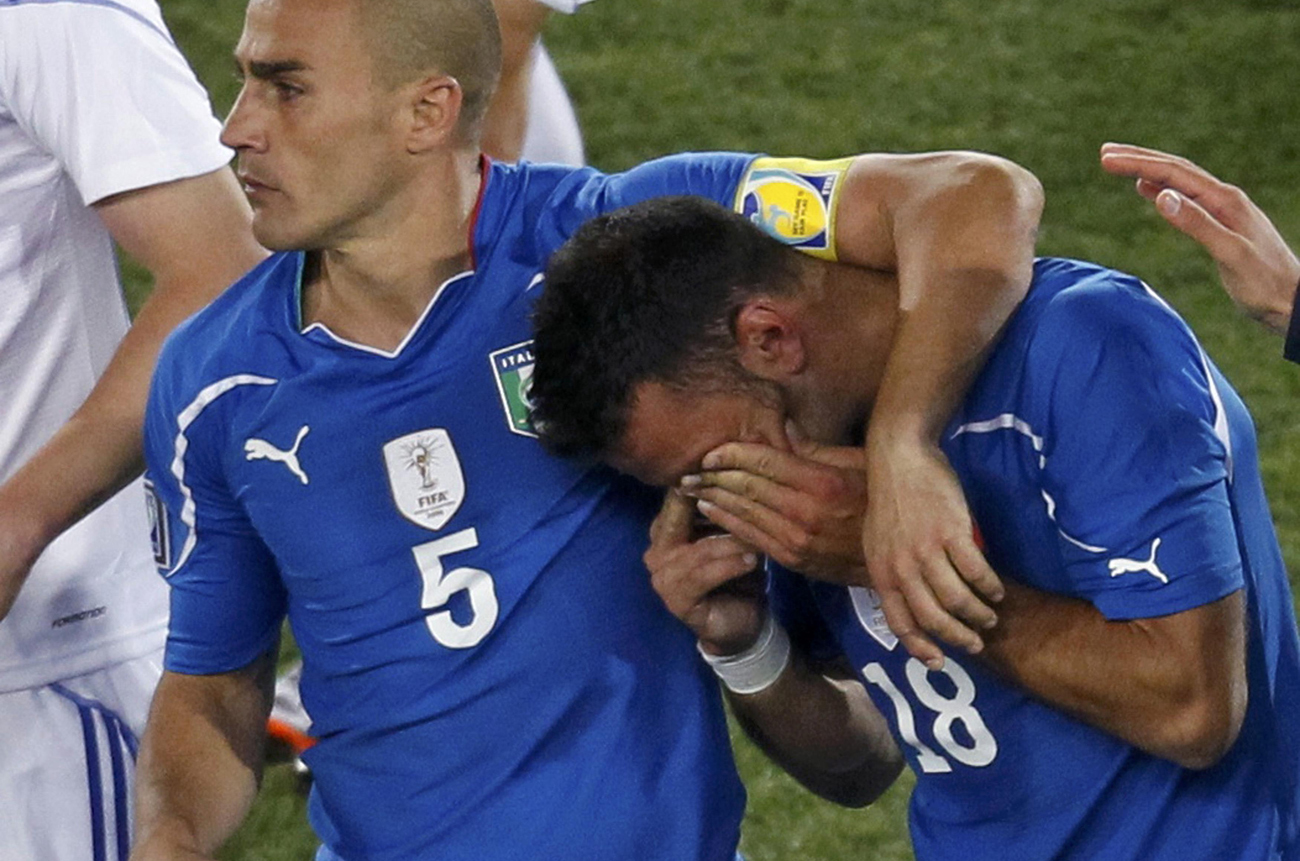 There is truly no country for old men. Italy, the doddering old codgers were humbled, nay – crushed – by a youthful and energetic Slovakian side, to see them become the second World Cup defending champions ever to exit the tournament in the group stages, joining, you guessed it, France, which did so in 2002. The match ended Slovakia 3, Italy 2.

But first, let’s name and blame the guilty party. It has to be, fairly and squarely, the brains behind the Italian football team: the man who decided on their match strategy, the way the game should flow and the starting line-up. Name’s Lippi, Marcello Lippi. He picked almost exactly the same team that lifted the trophy in the 2006 World Cup finals in Germany. That team was undoubtedly on top form back then. But four years is a long, long time in football. Lippi, once the cigar-chomping king of Italian football at Juventus, and then the celebrated hero of world football with a Fifa World Cup gold medal around his neck, has emphatically demonstrated just how old and tired he is.

Just like the French team, it’s back to the drawing board for the Azzuri. We have no doubt they will come back, as strong as ever, to fight the battles of Brazil 2014.

But let’s not detract from Slovakia’s victory. They’re a young and resilient side (Marek Hamsik, the Slovakian captain, is only 22 years old. How’s that for a bit of perspective?) Vladimir Weiss brought his team through a very tough qualifying group, beating the Czech Republic and Slovenia to get to the World Cup. Almost all of the teams that are here got here by playing good football. Italy underestimated Slovakia and paid a very heavy price for their folly.

Italy were totally out of ideas – the only change that Lippi made was to bring on a fresh pair of legs in the second half. Credit to Fabio Quagliarella – he played like his life depended on it, and crafted two excellent goals that offered a glimmer, just a glimmer, of the Slovak side’s lack of experience.

When the final whistle blew and the Italians made history in all the wrong ways, Quagliarella sobbed. He may take consolation from the fact that he will probably be one of the pillars of the new team that will be forged out of today’s ashes.
The evening belongs to Slovakia though, who will almost certainly face the Netherlands in the last 16 for their sins.

In the other match of the afternoon, Paraguay and New Zealand met in a tough encounter that ended in the goal-less draw. The result was very good to Paraguay, who won the group, but the real heroes were the New Zealanders, the lovable but tough underdogs that again refused to surrender. Although it ended in a draw, the match was a fighting affair. For a team so unfancied as New Zealand to end up being just one goal away from qualification into the next round, is a testimony to how far global soccer has come in its development. There are truly no weak teams playing in the World Cup.

Here are this reporter’s notes from the Italy-Slovakia match:

Italy’s problems are rather of the type you can’t fix in an afternoon’s training session. They’ve brought an old, old side to this World Cup. Remember Fabio Cannavaro’s humiliation at the hands of the very young New Zealand striker Chris Wood?

Let’s see if Slovakia can do something to hit the Italians where they are weakest.

On a personal note, good to see the tough little Gattuso get a run in this World Cup. Not that I expect him to do much.

I don’t know how many times in my life I’m going to have the opportunity to say this, but Italy are in serious trouble here. Zdeno Strba is in an enormous amount of pain. Gennaro Gattuso’s studs caught him in the knee. We’ve seen some pretty theatric diving and rolling about in this World Cup, but Strba has a vicious gash on his knee and is stretchered off. The

Slovak bench prepare a substitution, but Strba waves him away. He will soldier on, wound or no wound. You can’t fault him for bravery…

Suddenly all that criticism of Jabulani doesn’t make any sense.

Jan Mucha is rolling about on the ground, and Howard Webb is standing above him, making just as dramatic gestures for him to get up. A bit of slapstick comedy there.

Andrea Pirlo is about to make an entrance. Not Mauro Camoranesi, then?

The Italians are hanging on, only just…

All of the ball across all of the line, the rules say.

Huge scrum inside the Slovakian goal. It appears as if Quagliarella tried to snatch the ball away from the Slovak keeper for a quick kick-off, and got into an altercation with Mucha. The referee, an assistant and several players get involved.

Yellow card for Mucha and Quagliarella.

This is easily the most sensational match we’ve seen in this World Cup.