A country you never heard of draws against a soccer tea... 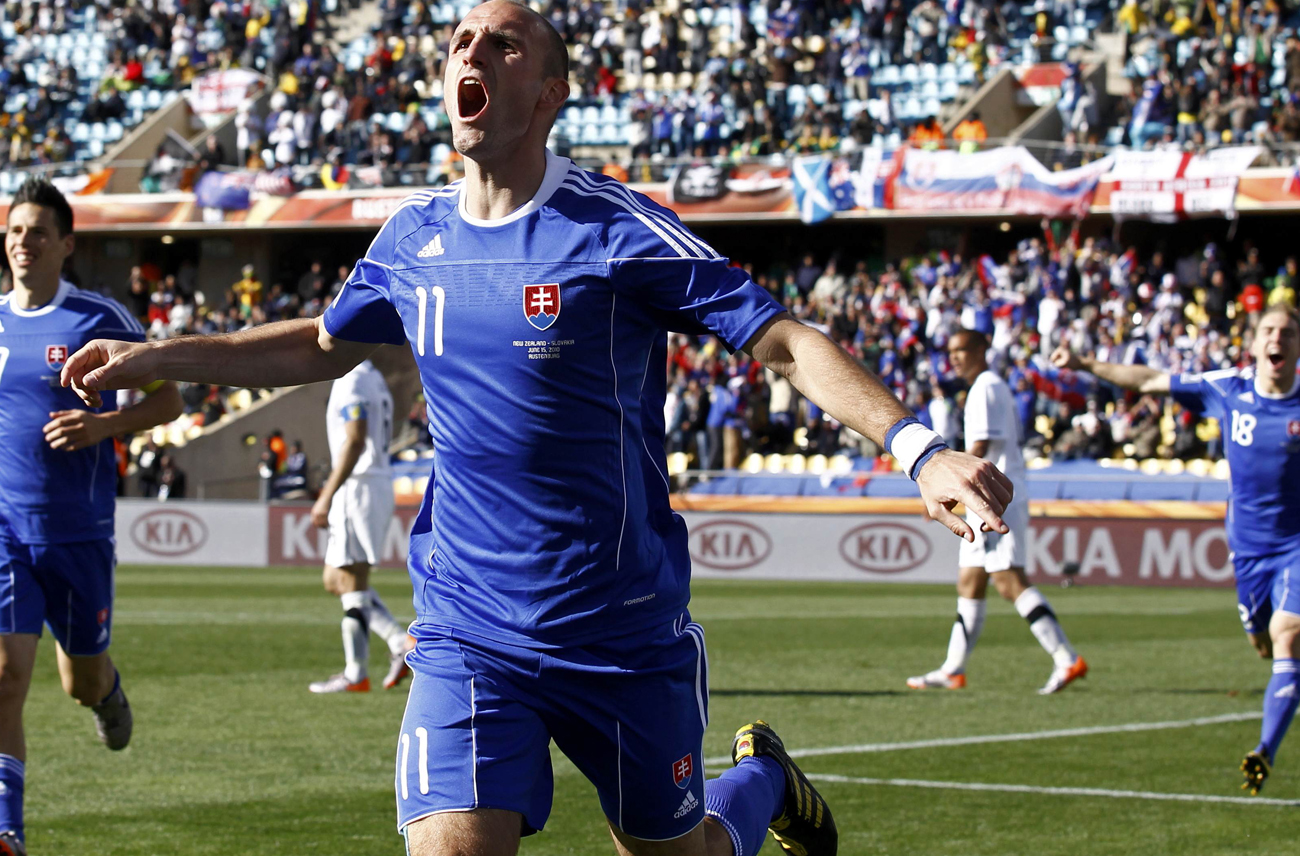 On paper, New Zealand never had a chance against Slovakia: it earned its place in the Rustenburg Group F match on Tuesday by defeating such superpowers as New Caledonia, Fiji, Vanuatu and Bahrain, while Slovakia breezed past Slovenia, Czech Republic, North Ireland and Poland. In reality, of course, paper predictions are not always right.

New Zealand’s All Whites mounted a brave fight against their much more experienced opponents and for the most of the first half the difference in class was not all that obvious. The All White’s attack was, if nothing else, pestering the Slovakian defenders, who in reality never really looked like they were fighting for their lives.

While the Slovakians worked relatively hard for the most of the match, they came out in the second half and immediately upped their game a notch. Suddenly it was obvious that a side that’s made up of players from the biggest European leagues would easily put the inexperienced southerners on the back foot. The game’s first goal came soon, in 50th minute, after the Slovakians resolutely executed a wing-pinpoint-cross move that landed the ball right on Robert Vittek’s forehead, just six or seven metres from Paston’s goal. The All White’s goalkeeper didn’t stand a chance. That was it, we all thought: there was no way the plucky New Zealanders would come back from this. And yet, they proved us wrong. It took 92 minutes for it, but just as their head coach Herbert ran out of fingernails to bite, the All Whites mirrored the Slovakian goal, exactly: Smeltz’s pin-point cross was as precise as it can get and Reid’s header was as good as fate.

Make no mistake though, both teams have little chance of fighting Italy or Paraguay. But, for what it’s worth, New Zealanders will be proud, having earned their first World Cup point ever.

This is definitely one of the lesser matches of the World Cup, a fact demonstrated by the number of empty seats in the Royal Bafokeng stadium.

Energetic start by the All Whites. We might be in for a lively match here.

Slovakia are the faster team, especially in attack. They do seem a little uncertain with having possession of the ball.

End of first half.

We can expect a bit of flapping, punching and deflecting from the goalies in this World Cup. Catching Jabulani is out.

Hopefully the second half will be better. I’m saying this too often during this World Cup.

Lots of body art in the Slovakian team.

50th minute: Slovakia scores, well done! Sestak crosses into the Kiwi box, and no one picks Vittek up, who nudges it past Paston for a goal. The goal replay shows that Vittek was offside by the skin of his teeth, but no assistant referee would have seen that one.

53rd minute: Slovakia shows their counter-attacking capabilities when Sestak makes a run from the halfway line, but is eventually subdued by the physically superior Kiwi defence.

54th minute: A yellow card for Strba for a cynical foul on Elliot from behind.

57th minute: An aggressive exchange between Elliot, the Kiwi captain, and Weiss after the Slovak collides with the New Zealand goalkeeper. I’m not sure what Elliot expected Weiss to do in that situation.

The Kiwis are a bit deflated, which isn’t terribly surprising.

63rd minute: Silly mistake from the Kiwi defence, who give away the ball to Vittek for a cross. Nothing comes of it.

64th minute: Sestak gets a good opportunity at goal after controlling a high pass, but doesn’t find a way through and back passes it to Hamsik. The Slovak captain makes a bit of a meal of that shot, sending it harmlessly high.

Did the Kiwis really think they had a fighting chance?

The Slovakian captain Hamsik is all of 22 years of age. He does have 32 caps under his belt, though.

69th minute: Sestak gets a great chance right in front of goal from a Vittek cross, but Paston is up to the task this time.

70th minute: Long discussion between the Kiwi captain and the referee after Killen fouls a Slovak player.

71st minute: Killen goes off for the 18-year-old Chris Wood.

75th minute: Jendrisek makes a run on the left flank and shoots wide of Paston’s goal. Slovakia hasn’t been very impressive in their shooting.

76th minute: Sestak gets another chance, but it bounces awkwardly and Lochhead kicks it out for a corner, getting Sestak’s ankle in the process. Good defending from the Kiwi, that one was going in.

79th minute: Strba gets a talking-to from the referee after a foul. He already has a yellow card, so that foul was quite silly.

83rd minute: Vittek, the goal scorer, goes off and Stoch comes on.

Stoch easily has the most ridiculous Mohawk of any player I’ve seen in this World Cup.

86th minute: Bertos loses the ball on attack. He had all the space and time in the world, but no creativity.

87th minute: Lochhead fires in a cross for Smeltz, who heads it wide. That was the first serious shot at goal for New Zealand in the second half.

90th minute: New Zealand’s strategy of firing in long crosses into the Slovak penalty isn’t reaping any dividends at all. The shorter Slovaks are managing to beat the Kiwis in the air.

90th minute: Weiss, who has had a fantastic game, goes off and Kucka comes on. Weiss gets a hug from his dad, the coach.

92nd minute: Reid, unthinkably, scores! Smeltz crossed the ball, and Reid does well to head it into goal. That is New Zealand’s first world cup goal in 28 years. 92nd minute: Reid gets a yellow card for taking his shirt off in celebration. Well, it’s a small price to pay for what is a stupendous moment for New Zealand.

End of second half.