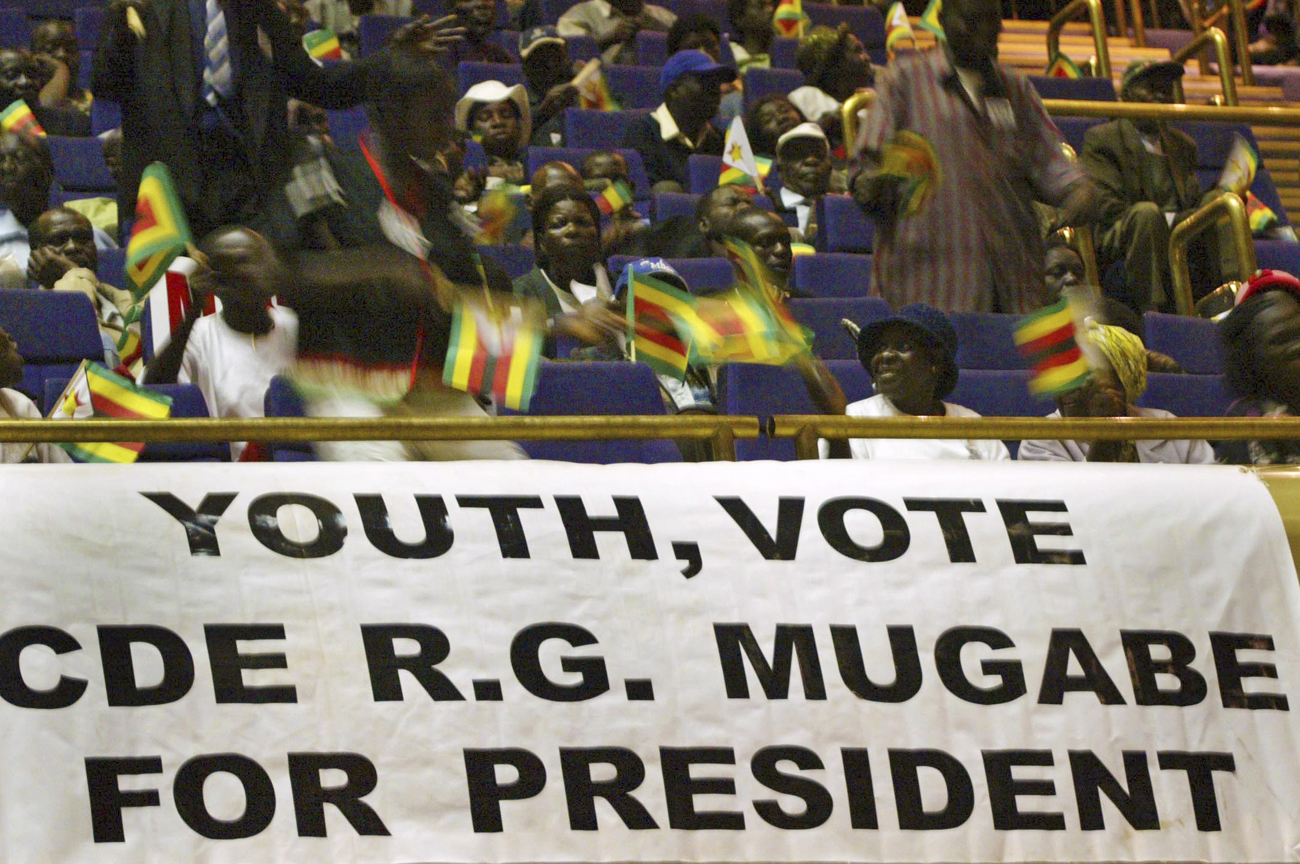 Zimbabwe’s youth, indigenisation and empowerment minister Saviour Kasukuwere says the country’s transfer of majority shareholdings in foreign-owned firms to black Zimbabweans will begin in the mining sector. Under regulations which took effect on 1 March, such companies must submit plans to show how they’ll sell 51% of their shares to indigenous locals within five years. Kasukuwere said firms such as Anglo Platinum, Impala Platinum and Rio Tinto would be fully compensated for their multimillion-dollar interests in the country, adding that government had acknowledged the fears of foreign investors that they’d be forced to give up their shares without payment. But if the grabbing of white farms is anything to go by, few believe the Zanu-PF faction of Zimbabwe’s current unity government will stick to its word.

Photo: Supporters of Zimbabwe’s ruling ZANU-PF party attend the launch of their manifesto in Harare February 29, 2008, ahead of next month’s harmonised Presidential and Parliamentary elections. President Robert Mugabe denounced his opponents as charlatans and witches as he launched his election manifesto on Friday and promised to give stakes in foreign-owned mines to locals. REUTERS/Philimon Bulawayo

A YouTube video apparently filmed in Sudan’s eastern Red Sea state shows people that look just like election officials appearing to stuff ballot boxes. The country’s opposition says this proves their claims of poll rigging, but the clip hasn’t been independently verified yet. The national elections commission dismissed it as a fake, saying they wouldn’t investigate anything that appeared on the Internet. The presidential, parliamentary and regional polls are the first multiparty elections in 24 years, held as part of a deal to end two decades of war between the largely Arab north and black African south of the country. The elections were extended by two days last week after early polling chaos, with some ballots being sent to the wrong polling stations, and others having errors on them. President Omar al-Bashir and his National Congress Party were always expected to win the national part of the elections, even before parties large and small boycotted the vote over fraud claims. And that doesn’t bode well.

Rwanda arrested two high-ranking military officers after reports in a local newspaper said they’d had disagreements with President Paul Kagame. One of the men is charged with corruption and abuse of office, while the other faces allegations that he engaged in immoral conduct. The arrests come days after Rwandan authorities reshuffled the nation’s military leadership ahead of elections in August. The Kinyarwandan independent newspaper was subsequently suspended for publishing false information and inciting resentment in the army. Investigations into the alleged crimes of the two generals are still under way, and it’s not clear if they will end up in court.

In an echo of what’s happening in Kenya, Zambia’s flower and vegetable industry is discarding fresh produce destined for Europe after the Icelandic volcanic ash cloud spread over European skies. Farmers are losing about $150,000 a day because of the resulting ban on flights, and Zambian farm workers fear they’ll be sent home like their counterparts in Kenya. The Zambia Export Growers Association says airline cancellations have had a huge impact on the industry, as it relies on air freight to get perishables out of the country. Zambia exports between 120 and 150 tons of flowers and vegetables to Europe each week, but now growers are throwing away produce as the cold-chain grinds to a halt. Britain’s Tesco retail giant threw Kenyan farmers something of a lifeline yesterday, but the predicament for African exporters remains dire.

Somali pirates hijacked three Thai fishing vessels and their 77 crew about 2,222km off the Somali coast, in what the EU Naval Force says is the furthest offshore attack since it started patrolling the region in December 2008. Pirates are breaking distance records with monotonous regularity these days, despite having to dodge some of the world’s biggest navies, including those from the US, China and India. Not long ago, attacks off the Seychelles were about as far into the Indian Ocean as the buccaneers ventured, but now they’re attacking ships closer to the coast of India than Africa.