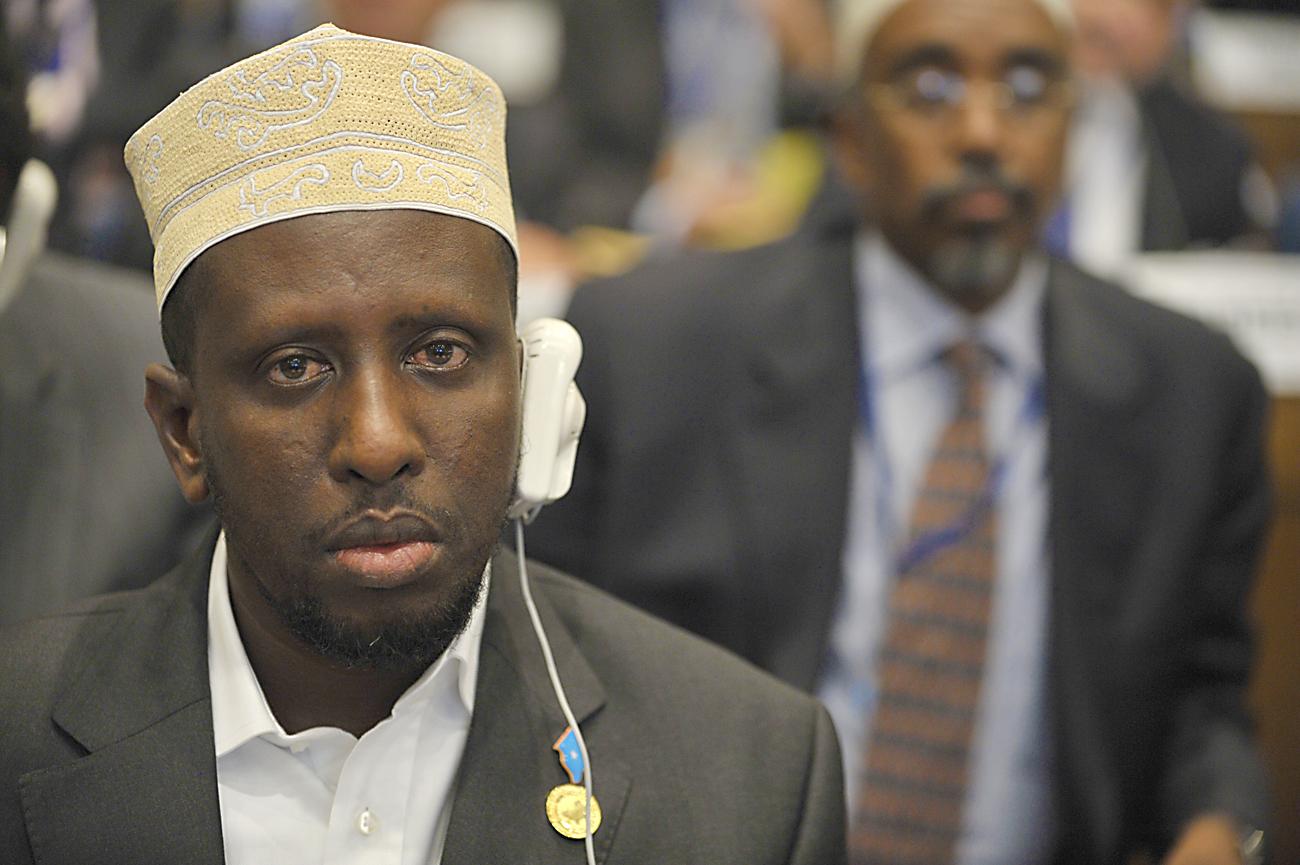 Somalia’s government says it would love to have some US air support for an expected offensive against al-Qaeda-linked militants which run huge swathes of the central and southern regions of the anarchic country. The offensive has been rumoured for quite some time, but Somalia’s government and army aren’t known for their capacity to implement much at all. Nonetheless, speaking during a visit to Britain, President Sheikh Sharif Ahmed said international aid for reconstruction would be needed to secure any land gained in the push. It almost sounds as if an offensive actually will take place. The US strikes hard at militants from time to time, but the thought of Americans returning in force after they got booted out of Somalia in 1994 is pretty remote. However, The New York Times recently reported that US airstrikes and Special Forces operations might take place if the offensive succeeds in dislodging al-Shabaab militant Islamist fighters. Photo: US Navy (via Wikipedia)

The US has piled on the pressure for Nigerian authorities to do something about the mass killings in the central city of Jos, according to the BBC. It’s not the first time that so-called religious riots have seen hundreds of people butchered in Jos, but few have ever been called to account. Killings occurred in 2001, 2008 and in January this year. Now, US secretary of state Hillary Clinton says Nigeria needs to arrest and try those responsible. Local politicians claim the killings are because of religious or sectarian conflict, but many say that ethnic groups are battling for fertile land and resources in the endemically corrupt country. Many of the dead in the latest killings are women and children from Christian communities, said to have been victims of reprisals for mass murders in January, when many victims were Muslims. It’s incredible the attack could have taken place when a military curfew has been in place since the January killings, when at least 200 people died.

French news agency, AFP, quotes sources as saying that a week after South African sound engineer Nick Greyling, who works for satellite television channel SuperSport, was abducted near the oil-rich Niger Delta region, a ransom of $100,000 has been paid for his release. One man escaped a day after Greyling and two colleagues were taken from their company’s staff bus near Owerri airport, after filming a soccer game in nearby Enugu. The fate of the remaining man isn’t known.

In a surprise move for a judiciary that all too often is its master’s voice, the Zimbabwean High Court has refused to overturn the election of the first opposition speaker of parliament since independence. That will anger President Robert Mugabe’s Zanu-PF party, while showing the opposition Movement for Democratic Change that some things (very occasionally) do go their way in the country’s distinctly non-unified unity government. Lovemore Moyo, a senior official from Prime Minister Morgan Tsvangirai’s MDC, became the first opposition speaker in August 2008, when Zanu-PF lost its parliamentary majority in fraught and bloody elections. But the MDC was accused of trying to influence voting for Moyo. However, Judge Bharat Patel ruled that no one was coerced to vote for any candidate, dismissing the application with costs. You never know what you’re going to get with Patel. He ruled against a Southern African Development Community tribunal ruling seeking to bar the state from acquiring land for resettlement purposes.

The family of Rwanda’s first president, Dominique Mbonyumutwa, has been given 60 days to rebury him after officials said they needed the land around his tomb for redevelopment purposes. It seems as if nothing is sacred in a country that saw some 800,000 people murdered during a 1994 genocide, and where politicians know just how to push the wrong buttons. The BBC says Mbonyumutwa’s family claims the government order contravenes an earlier court ruling which told the government to take care of the tomb. Mbonyumutwa became interim president in 1961 when Rwanda gained independence from Belgium and died in 1986.

The Red Cross and UN have launched a campaign to vaccinate 85 million children under the age of five against polio in west and central Africa, with hundreds of thousands of health workers and volunteers going door-to-door in 19 countries. It’s an oral vaccine, so that makes it quick and easy to administer, although the remoteness of many African communities means the virus has still not been stamped out. Previous efforts at complete eradication failed, because not enough children were vaccinated. And there are still cultural and religious problems to be overcome, such as in past campaigns in Nigeria, when some religious leaders claimed the vaccinations were an attempt to sterilise children and spread HIV.

Ugandan authorities say 500,000 people need to be moved from their homes in mountainous areas because of the risk of mudslides. This comes after hundreds of children died recently when mud enveloped communities on the slopes of Mount Elgon in the east of the country. Now the government says some 200,000 people living in the west, near the Ruwenzori Mountains, will also have to be relocated, as communities in Uganda at risk of landslides and floods number some half-a-million. It sounds like a grand and hare-brained scheme that won’t be achieved without significant struggle. Firstly, it needs parliament to OK it, vast sums of money, and most of all, consent from huge numbers of very diverse people. It’s pie-in-the-sky.